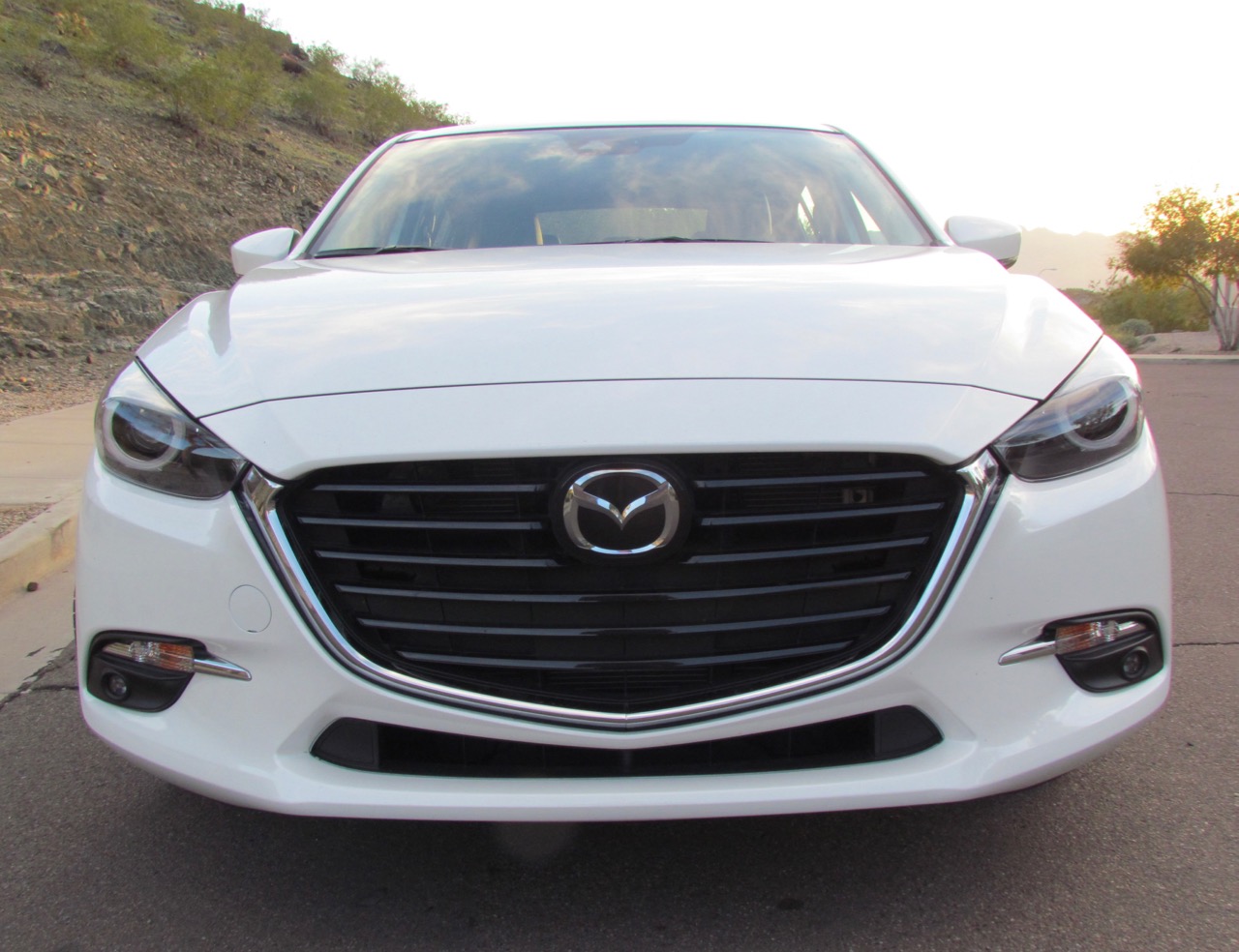 From one end of the lineup to the other, there are few automakers who produce cars that are as much fun to drive as does Mazda. Yes, indeed, there is that Miata “zoom-zoom” in every Mazda vehicle, but it actually pre-dates the MX-5, going back to such vehicles as the RX-7 and the 323 GTX, that hoot-to-drive, road-legal rally car.

But as much fun as Mazdas have been to drive, and for at least the past four decades, of late there has been one downside — an instrument panel that all but disappeared when the driver was wearing polarized sunglasses, which here in Phoenix, Arizona, is pretty much every day of the year.

So a spanking new 2017 Mazda3 arrives in my driveway for a week-long test drive and what’s the first thing I notice? Well, that it’s painted Snowflake White, obviously. But climb behind the wheel, find the on/off button (it’s hidden behind the windshield wiper stalk and a heads-up display emerges, displaying not only your speed, and readable with Polarized sunglasses, but also the posted speed limit and even such things as stop signs. And there they are, right up on top of the dashboard so you don’t have to divert your eyes from the road to read the digitally provided numbers.

But wait, there’s even more: There’s also a digital speed readout within the centrally located tachometer, and not only is your speed readable, but so is the rest of the information the instrument panel shares.

Now, not only are Mazdas fun to drive, but you can drive them while knowing your speed and other information critical to the driver.

Not only is the 2017 Mazda3 a nicely updated vehicle, but it was a finalist for World Car of the Year honors. New for 2017 are the car’s interior, front and rear fascia, as well as new features ranging from better sound insulation to a new safety package and that traffic-sign recognition technology and an available heated steering wheel, new wheels, and even a couple of new colors — Machine Gray and Eternal Blue — though the car I’m driving looks just fine in Snowflake White with a black interior.

Actually, as it turns out, the HUD isn’t new for 2017, though for this model year the graphics were updated with color and the traffic-sign recognition technology was added. The HUD also indicates when there is traffic in front or on either side of you. Regardless, this was my first experience with the system and, obviously, I like it a lot.

It also enhances the fun you can have while driving this car. The Grand Touring version is the top-of-the-line model of the 5-door 323. That means instead of a 155-horsepower, 2.0-liter four-cylinder engine you get to take advantage of 184 hp and 185 pound-feet of torque, in the case of this test car with a 6-speed automatic that benefits from being in Sport mode. A six-speed manual also is available.

Also helping in that regard is Mazda’s new G-Vectoring Control system standard on all 2017 Mazda3 vehicles. Mazda says the technology “uses engine timing to control chassis dynamics, leading to smoother, more accurate steering inputs resulting in greater confidence and control for the driver…

“Eight years in the making, this industry-first technology exemplifies Mazda’s human-centered design philosophy where careful thought and consideration was given to how to develop a technology that would help realize smooth, predictable and efficient movement.

“While it will largely go unnoticed to the vehicle occupants GVC will undoubtedly make any driver a better one. The car goes where you want it to go, resulting in increased driver confidence and enhanced peace of mind.”

Mazda says its engineers opted not to engage the brakes in the process because that would slow things down too much. Instead, they determined that by reducing ignition spark, engine braking could apply the equivalent of eight pounds of brake pressure on the front end of the vehicle, enhancing control without occupants even realizing what was happening.

“Ironically,” Mazda adds, “the worse the road conditions are, the better the technology works.”

I appreciate that explanation, and only wish someone at Mazda could do as good a job of explaining just what Skyactive means.

That might seem like a lot for a crossover-style compact, but not only is this one fun to drive, but now you can even see how fast you’re going as you drive.