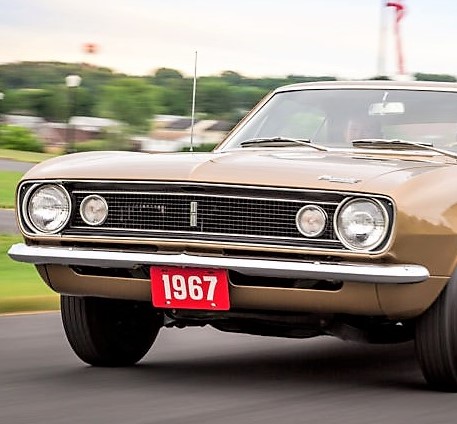 General Motors was chasing the runaway success of the Ford Mustang when its designers began developing the prototype Chevrolet Camaro. Behind closed doors, a dream team that included such GM stars as Pete Estes, Ed Cole and John DeLorean quickly created a sports coupe that ran right to the heart for Chevy fans.

The design phase was very hush-hush, according to GM insiders, with even the skeptical company brass kept in the dark until the completed Camaro prototype was revealed to them. They were wowed by the sophisticated design of the four-seat coupe, which had been honed by wind-tunnel testing.

For 1967, Camaro was added to the Chevrolet lineup as an unprecedented sixth model.

That was 50 years ago, and in March, the Amelia Island Concours d’Elegance in Florida will mark the half-century anniversary of Chevrolet’s “pony car” with a special display of significant Camaros on the show field.

They will include the first Camaro built, a ’67 coupe with VIN 10001, that was the first of 49 “pilot cars” created as production began at GM’s Norwood Assembly Plant in Ohio. The Grenada Gold car was restored in 2014 by its current owner, retaining its original Plain-Jane configuration of inline-six power with two-speed automatic, and with steel wheels and standard hubcaps – GM initially wanted to emphasize the affordability of its new Camaro as well as its stylishness.

Camaro No. 1 will be joined in the group by 1968 and ’69 performance-tuned Yenko Camaros, a 1969 Indy 500 RS/SS Pace Car, a 1973 Baldwin Motion Camaro, a COPO Camaro and several special first- and second-generation cars.

“The Camaro brought affordable world-class design to American car showrooms,” said Bill Warner, founder and chairman of the Amelia Island Concours d’Elegance. “When experts, critics and even competing designers compare a mass production design such as the Camaro to a Ferrari Lusso you know you’ve struck gold.

“With a big list of models and options one could build a very personalized Camaro. Camaros were road-racing and drag-racing champions, luxury GT cars, Saturday night cruisers, top-down beach cruisers, you name it. Now they’ve taken their rightful place as true modern classics.”

The origin of the name Camaro has been the topic of speculation since the beginning (the code name during the design phase was Panther). Chevrolet lore presented the scenario that the branding team stumbled across the word in an old French-English dictionary and went with it.

But when pressed to reveal the source of the name, Chevrolet marketers came up with their own tongue-in-cheek definition: “A Camaro is a small, vicious animal that eats Mustangs.”

It wasn’t until years later that Chevy folk confessed that the word Camaro was totally made up.

RELATED:  Nice ice: The history of the Zamboni

The Amelia Island Concours d’Elegance takes place March 12 at The Golf Club of Amelia Island at The Ritz-Carlton Resort. For information, visit the concours website.