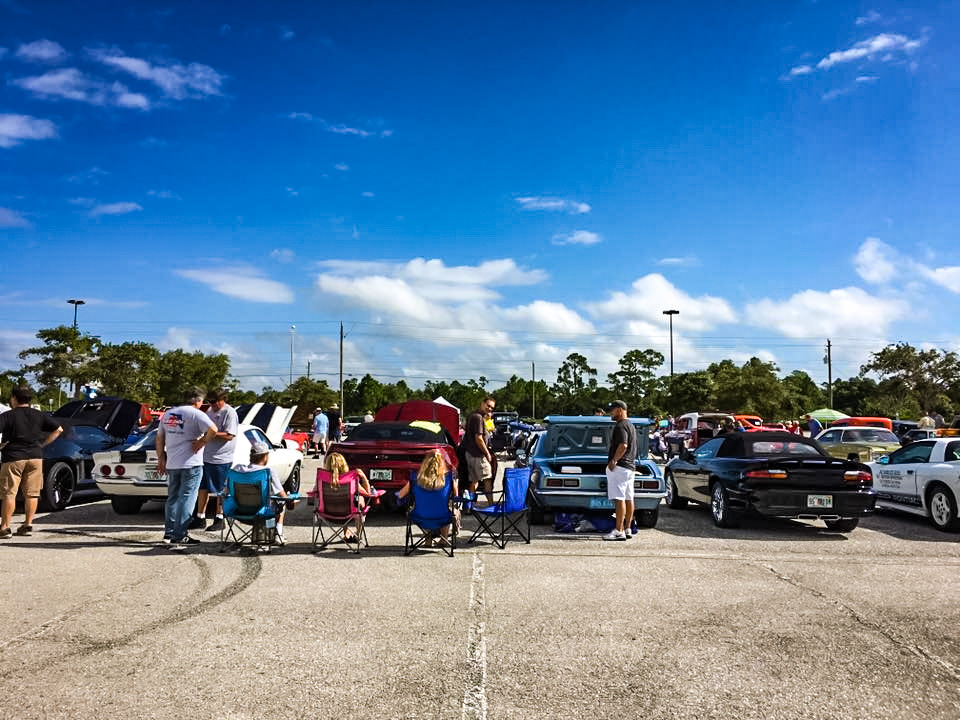 Muscle Car City in Punta Gorda, Florida, holds its monthly car show Saturday from 9 a.m. to 1 p.m. The event is free to attend or to show a car. Six awards will be given out and music will be provided by Tom’s Traveling Tunes.

The following weekend, the museum holds its monthly automotive flea market and car corral from 7 a.m. to 1 p.m.

The Blackhawk Museum in Danville, California, hosts cars and coffee Sunday from 8 a.m. to 10 a.m., with a special celebration of Enzo Ferrari’s 119th birthday presented by the Ferrari Club of America and the Alfa Romeo Association. Shortly after, the museum holds the first Sunday Cars and Coffee on March 5.

The Petersen Museum plans a “Breakfast Club Cruise-In” February 26, also to celebrate Enzo Ferrari’s birthday. The cruise-in is held from 9 a.m. to noon on the third-floor parking structure.

View of the car show

Sunday, the Blackhawk museum features a Speaker Series presentation by David Hobbs, who has competed in F1, F2, endurance racing, Can-Am, Formula 5000, touring cars, IMSA and other series. He will share accounts from his career as one of the most versatile race car drivers. Hobbs is set to speak at 10:30 a.m. and 12:30 p.m.

The Auburn Cord Duesenberg museum in Indiana offers its second winter-discussion series program February 21 with a presentation titled “Freedom Rides, the Impact of Transportation on the Civil Rights Movement.” Then, Donald Davidson, renowned Indianapolis Motor Speedway historian, will give a presentation at the museum on March 15 at 6:00 pm celebrating the history of the Indianapolis 500-mile race.

The museum also plans to present “Tucker: A Man and his Motorcar” on February 25.

February 20, the National Corvette Museum holds a “Pokemon science” day for ages 7-12. Participants will be able to create Pikachu lightning bolts, shoot fireballs like Chizard and discover how Hoppip is easily lifted off the ground among other things.

The Owls Head Transportation Museum in Maine offers a series of children’s activities during school vacation week, February 20-24. The activities have been designed for youth ages 6 to 14. The workshops are free to the public and materials are provided, though the museum suggests a $5 donation. Registration opens today and it is strongly encouraged as seating is limited. Activities run from 10 a.m. to 1 p.m. and include a paper airplane workshop on February 20 followed by Mousetrap Cars, Stick and Tissue Airplanes, Electric Cars and the week ends with Hot Air Balloons.

LeMay – America’s Car Museum in Tacoma, Washington, holds a K-12 educator workshop February 25 from 9 a.m. to 3:30 p.m. with a goal of helping teachers develop new ways to incorporate science, technology, engineering, and art into their lessons.

The British Motor Museum holds a “Cars through the lens” photography workshop March 18, followed by “Lights, Camera… Cars” the following day. Each workshop will be led by Lara Platman, who will teach participants how to use their camera settings, basic light and composition, the rule of thirds, and other essential techniques.

The National Automobile Museum offers a history symposium entitled “The 1970s: Activism: Voices for Change” on April 26 and 27, from 4-9 p.m., and April 29, from 8:30 a.m. to 5:45 p.m. The discussion will feature national speakers, historians, authors and local scholars will present on a wide variety of topics such as the Iran hostage crisis, foreign policy, the impact of the 70s on our modern day world, the auto industry and even a humorous look at the decade’s culture including fashion

The LeMay Marymount in Washington State offers driver education in a Model T with students touring the historic 88-acre Marymount Military Academy Campus while learning how to drive a Ford Model T. Classes are offered from May through September.

The Simeone Automotive Museum in Philadelphia holds a demo day on February 25 to showcase British Beauties. The cars to be featured include a Squire Roadster, Jaguar SS 100, Bentley Van Vooren Streamliner, Jaguar C-Type, Jaguar D-Type, and an Aston Martin DBR1.

The National Corvette Museum in Kentucky heads to Seattle, Washington, for an adventure-filled weekend July 26-30 with sights including Mount Rainier, the LeMay museums, Museum of Flight, Seattle Center (with Space Needle), Pikes Place Market and more. Registration is $1,890 for single occupancy and an additional $340 for double occupancy. NCM Members receive a $40 discount.

The AACA museum in Pennsylvania offers travel opportunity’s to Cuba from June 2-10; to England, September 1-10; and to Italy, November 3-12.

The Mullin Automotive Museum opens an exhibit celebrating the French automaker, Citroën. “Citroën: The Man, The Marque, The Mystique,” will feature cars from the entire history of the company as well as an in-depth look at the founder, Andre Citroën. The exhibit will run from Saturday, March 11th, 2017 through the spring of 2018.

Meanwhile, the Smithsonian’s National Museum of American History opened an exhibit February 1 that displays objects that were used during the days of the Black American Racers Inc. The former owner and president Leonard W. Miller and former members of BAR donated clothing, race victory trophies and awards, as well as the iconic steering wheel from the Formula Super Vee driven by the late BAR driver Tommy Thompson.

The AACA Museum invites families to visit the museum February 20 from 1 p.m. to 3 p.m. to create a Kissmobile using Chocolates donated by the Hershey Company.

The museum plans the “Second chance Spring Auction,” April 8. The auction will be held from 8 a.m. to noon and features a flea market and car corral along. That same day and again on April 15 the museum holds an Easter egg hunt from 11 a.m. to 1:30 p.m.

On February 18, the Simeone holds the AC Retrospective dinner party, a celebration of how a small British car manufacturer that created three-wheel delivery vehicles in 1907 would end up working with Carroll Shelby to create the Shelby Cobras. Special guest will be noted AC racer William S. Jackson. The museum shows a corresponding “Best of Britain” and “AC Cars Retrospective” exhibit from February 18 to March 12, 2017, in support of the Foundation’s Teen Driver Awareness Program.