We drive friendly Fiats at the Bondurant school 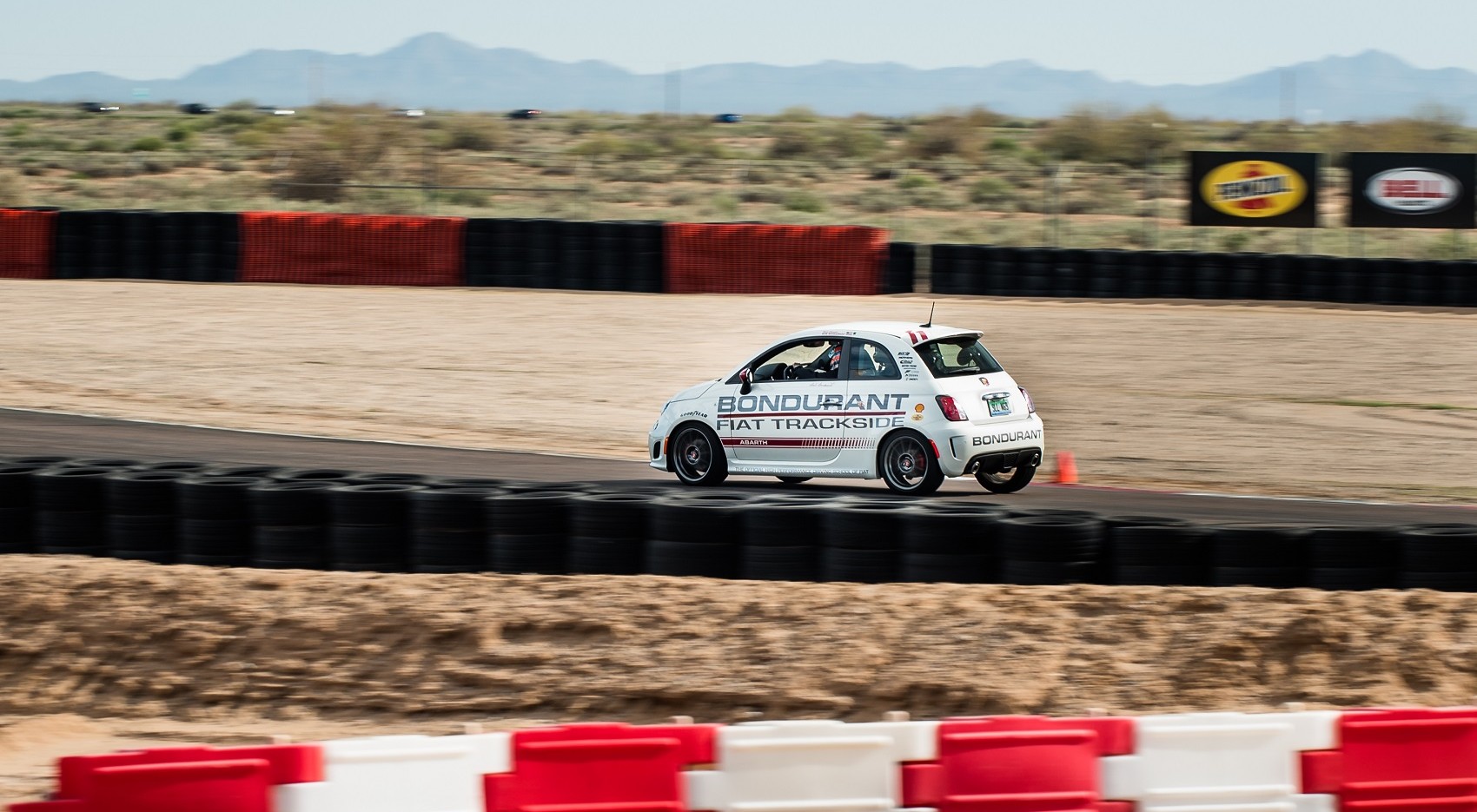 Dodge Vipers line the entrance of the Bob Bondurant School of High-Performance Driving on the outskirts of Phoenix, Arizona. They seem ready to strike at any moment. Meanwhile, menacing Dodge Hellcats stare you down.

But just as you’re starting to question if you’re in the right place, a friendly Italian face greets you.

That friendly face comes from a fleet of Fiats, 124 Spiders and 500s, each adorned with Abarth performance upgrades and being made available to owners and fans of the “small but wicked” cars as part of an all-new track experience designed to improve driving skills.

The opportunity is offered at no charge to new owners and to those who lease either model (and for up to a year after the vehicle purchase or lease date).

Bondurant also uses the Abarths as part of other classes and invited photographer Charles Siritho and me to take part in the first such Fiat Trackside Experience.

My day started at 8 a.m. inside one of the school’s classrooms with chief Instructor Mike McGovern discussing basic car control skills to ensure each driver knew what to expect before getting behind the wheel. He also provided an overview of the six driving sessions included in the one-day event.

Cars are available with manual or automatic transmissions, so owners can drive a car much like the one they own. I was assigned a 124 automatic, and Charles Siritho got a 124 manual.

On-track events began with students riding around the course in Dodge SRT Challengers with instructors at the wheel. Each instructor demonstrated what we were to do in our cars and drove slowly enough to point out when to when to brake ,when to accelerate, and also to show what not to do, as well as the outcome of not following the proper technique.

Prior to this Bondurant event, my experience with Fiat was limited to briefly driving a 124 at the 2016 Active Lifestyle Vehicle of the Year competition last fall.

At Bondurant, our first exercise, a slalom session, got us familiar and comfortable with our cars. I found it particularly useful due to my lack of experience with the car and learned later in the day that several of the owners also were inexperienced, having driven their own cars only once or twice due to inclement weather at home.

Throughout the session, instructors repeated the “look where you want to go” mantra and reminded us to avoid target fixation. Additionally, the session helped us into a track-driving mindset regarding steering input, weight transfer and balance.

The slalom rewards a measured approach and dishes out punishment those who think, “yeah, I’ve got this.”

To get the best performance out of the 124 Abarth and the 500 Abarth, a shifting exercise followed the slalom. Students were encouraged to use the ‘heel-and-toe shifting technique, which combines braking and downshifting when approaching a corner.

According to Siritho, who daily drives a car with a manual, the session felt a little advanced for the new Fiat owners. But, he added, “The experience helps get people out of the norm and gets their adrenaline pumping. It shows what the car is capable of as well.”

Meanwhile, those with automatic gearing were encouraged to use their car’s sport mode and its paddle shifters or gear-change lever.

After a lunch break, we headed back out to the cars for an autocross. The goal was to get through the coned-off road course as quickly as possible without hitting any cones. Each cone hit was considered a penalty and added a second to your time.

The session continued to build on vision skills, car control and introduced the proper driving line.

Next, we embarked on our first real “on-track” activity: A rally-style session with students paired into teams. From the start box, the driver took off and navigated around the track as quickly as possible to the checkpoint box. There, the driver and passenger switched places for the drive back to the start.

For me, this was the most fun of the entire experience. The whole day is a blast, but you are alone in the car a lot, so aside from lunch and the little breaks between sessions, you don’t really interact with your fellow students. The activity forced students to work together.

Despite the competitive element, egos were absent and everyone worked together to make sure the cars were in sport mode before a team went out. We provided each other with tips and cheered each team on. The session was filled with smiles and laughter from students and the instructors who also seemed impressed with some of the team’s creative ways of switching drivers quickly –- everything from coordinating which way each ran around the car, to the passenger moving the gear shift while the driver fastened a seatbelt.

Following the rally session, each student was issued a helmet and got to drive on the track in a lead-and-follow exercise that focused on the proper driving line, and on braking and acceleration points.

The last activity of the day put students in the passenger seat as the instructors took the wheel and drove at speed for hot laps.

According to the school, an optional second-day “road rally” is in the works that will include driving around 200 miles up into the Coconino National Forest with a lunch stop in Payson.

When it comes to the day-classes offered to new owners, McGovern said “that student-to-instructor ratio is three-to-one; each student gets their own vehicle for the time that they’re going through that program, and then there’s that personal attention that they get from that instructor.”

Considering Fiat left the states with a less than desirable reputation in the 1990s, returning around 25 years later, I asked the owners what they loved most about their little Italian cars. For some it was the competitive price point — the 2017 Fiat 124 Abarth has an MSRP of $28,195 while the 500 Abarth starts at i$19,995. Others said they liked the compact size of their cars, or that “it’s back by Chrysler; I can take it anywhere to be serviced, it’s not some obscure hard-to-deal-with brand anymore.”

The overarching theme echoed by owners was love for the unusual and their car’s innovative design.

“I like an underdog, and one with real character,” said one owner, adding “I enjoy challenging norms and the car does that with its retro looks and its Italian heritage speaks to the cars performance.”

Another owner said, “I like that it’s different and a little cheeky, but still fairly practical. It feels like ‘me,’” adding “I like the Abarth in that it’s quick but doesn’t take itself too seriously. Or should I say, it’s a scorpion sting wrapped in a downy blanket.”

Things to know about going to Bondurant: