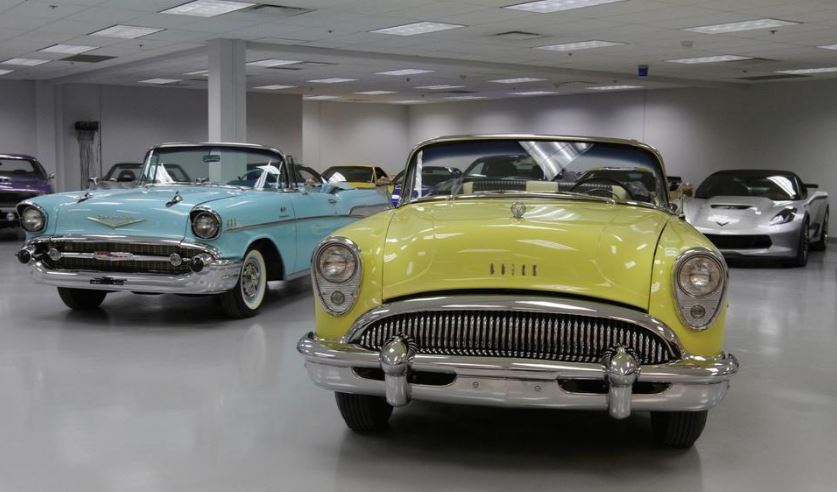 A former missile manufacturing plant on the Raytheon Co. campus in Rhode Island has had its 114,000-square-foot space gutted and is slated to open in June as the Newport Car Museum with space for separate showrooms, events, a library, and storage space for about 60 cars. Fifty of the cars to be housed within the new museum come from a collection amassed by Gunther and Maggie Buerman, the driving force behind the project.

The Buerman’s car collection includes examples of Chevrolet Corvettes and Ford Mustangs and will be supplemented with furnishings from their mid-20th century furniture collection that includes designers such as Charles and Ray Eames, Arne Jacobsen, Hans Wegner, and Knoll Inc. Additionally, the walls will be decorated with large photographs and informative videos.

According to Maggie Buerman, the project is style driven, while Gunther adds they looked at the National Auto Museum in Reno, Nevada; the private Ralph Lauren Car Collection in Westchester County, New York; and the Revs Institute in Naples, Florida for inspiration.

“It’s more of an art museum than a car museum,” said Gunther Buerman, adding that he considers classic cars as works of art.

Other prominent vehicles highlighted in the collection include modern Mopar in the form of a Plum Crazy Plymouth Challenger Hellcat, a 1970 Plum Crazy Plymouth Hemi ‘Cuda. a restored 1965 Shelby 427 SC Cobra that formerly belonged to a member of the Walton family, and a number of “fin cars” which will have their own display spaces. Among them: a yellow 1954 Buick Skylark, a pale blue 1957 Chevrolet Bel Air and a red 1957 Cadillac Eldorado Biarritz, all convertibles.

“There’s something here for everyone,” said Wayne Lee, the facility manager.

The Newport Car Museum will be the second car museum in the area, the first being the Audrain Automobile Museum which opened two years ago on Bellevue Avenue in Newport.

“It’s like having two restaurants in town,” Buerman said, adding he was not concerned about the museums being in the same area and that he expects to attract visitors that would visit both museums.