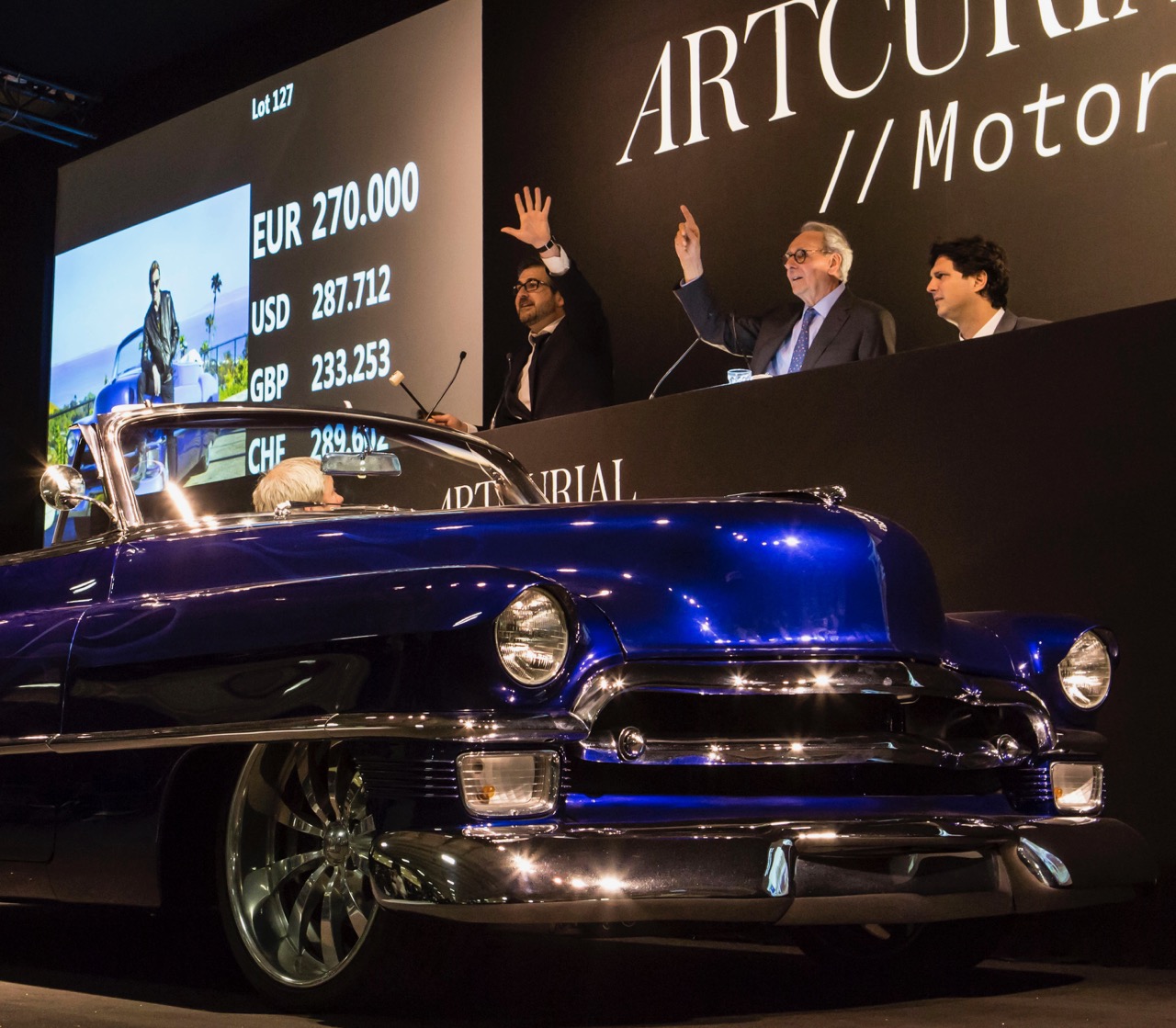 The team from Paris-based Artcurial Motorcars felt like rock ’n roll stars this past weekend when more than 3,000 people crowded into the auction area in the Parc des expositions Porte de Versailles for the company’s annual Retromobile sale, especially with French rocker Johnny Hallyday’s music playing as two of his vehicles were sold for charity.

The sale generated $34 million in transactions with a 73 percent sell-through rate. And that was just the collector cars that sold on Friday. On Saturday, the auction continued with nearly 450 automotive mascots from the Vincent Saja collection and with an additional sale of art and automobilia.

Of the 3,000 people in the auction room Friday for the collector car sale, 500 were registered bidders, and represented 18 countries. Artcurial reported that another 15,000 people watched the livestream of the sale.

“As Johnny Hallyday said in his song Cadillac, ‘the heart is an engine’,” Artcurial Motorcars managing director Matthieu Lamoure said in a news release. “Artcurial Motorcars’ engine has the ability to bring together the entire collectors’ car market every year in Paris. In front of a 3 000-strong audience of car lovers, we brought the sale to life and our results demonstrate a market that remains strong and stable.”

Artcurial noted that if you factor out the sale a year ago in Paris of a 1957 Ferrari 335 Sport Scaglietti for a record $32.1 million, sales were up a whopping 33 percent at the auction last week.

“The current market shows both a robustnesss and a real vitality,” added Herve Poulain, Artcurial’s honorary chairman. “The Hervé Ogliastro Collection sold really well, as demonstrated by the Bugatti Atalante that made twice its estimate!

“There was something for everyone in this sale, from the famous Dino, that made the highest price, to a Renault 4CV that changed hands for the lowest sum!” The 1955 Renault sold for $19,027.

The Dino to which Poulain referred was the 1965 Ferrari 206 P Berlinette Speciale by Pinin Farina, the first Dino prototype, an Enzo Ferrari-commissioned, Leonard Fioravanti-designed vehicle that was unveiled at the 1965 Paris Motor Show. The car launched a new Ferrari design language that would be translated into the Dino 206 and 246 GT and Ferrari 308, 328 and 288 GTO production vehicles.

Sergio Pininfarina gifted the car to the Musee de l’Automoible at Le Mans in 1967. The museum consigned the car to the 2017 Artcurial auction and after a 10-minute bidding battle among three people it sold for $4,653,824, the top sale of the auction, to a European collector. (Prices reported include buyer’s premium.)

Rocker’s Harley sets record as it sells for charity

Nine of the top-10 sales were purchased by European collectors, Artcurial said. The exception was the 1935 Bugatti Type 57d Atalante from the Ogliastro collection, which went to an American collector for $2,471,072.

The Harley ($356,160) and the Coddington Cadillac ($583,000) were sold by Hallyday to benefit Le Bonne Etoile and to build orphanages and help underprivileged children in Vietnam.

Hallyday, 73, born Jean-Philippe Smet and also known as “the French Elvis,” has sold more than 80 million records around the world, though he is largely unknown except to those who speak French.

Other highlights of the auction included the sale of two rally cars, a 1972 Alpine A110 Berlinetta GR4, nicknamed the “Defense Mondiale” and formerly raced by Jean Ragnotti, and Ragnotti’s own 1982 Renault 5 Turbo. Ragnotti introduced the cars and talked about their histories. The Alpine sold for $315,880 and the Renault for $341,108. After his car sold, Ragnotti not only handed over the keys to the car’s new owner, but also gave the buyer one of his period racing safety suits.