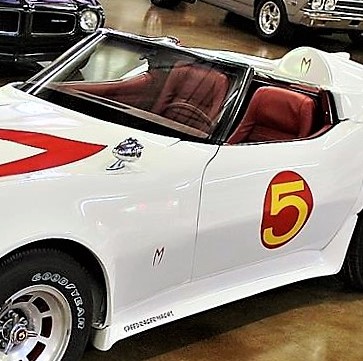 If driving a collector car is all about fantasy and nostalgia, then here’s a unique sort of custom Corvette that knocks that into the next galaxy.

“Go Speed Racer Go!” everyone would shout when they spot you in the Pick of the Day, an actual Speed Racer Mach 5 like the one featured in the Saturday morning adventure cartoon. The seller, a dealer in Katy, Texas, assures us that this is just a replica and not the real thing, although it sure looks like it just drove out of the Anime world.

Under its phantasmagoric appearance is a standard-issue 1979 Corvette L82, which means that the Mach 5 is totally drivable, although you’d have to watch out for the crowd that gathers everywhere you go. The car is part of a series and professionally built, the seller says, and it looks like it was properly done.

“This car is a licensed Mach 5 and is #5 of 5 built,” according to the listing on ClassicCars.com.  “This car was just completed in January of 2017 and comes with a Certificate of Authenticity and full rights to show and display this car using the name ‘Speed Racer Mach 5.’ This is a fully licensed Speed Racer Mach 5.”

Fully licensed indeed, and most likely the most-interesting TV car you could find this side of the original Batmobile. Imagine showing up to pick up your kid at school (although probably not high school). “Your dad is Speed Racer!”

Coming back to reality for a moment, the car is “a fresh build with fresh paint, fresh graphics and a brand-new, red interior,” the seller notes. “The car has a very nice muscle car rumble and is ready to go now!”

Fans might recall that the Mach 5 in the cartoon was packed with all kinds of adventure gear, similar to the Batmobile and James Bond’s Aston Martin, although this replica apparently just runs and drives. Too bad, since it would be great to experience such features as the Go Homing Robot bird or the Frogger Mode for underwater driving.

Fun fact: In Japan, where the Anime cartoon originated, the word for “five” as in Mach 5 is “go,” as in “Go Speed Racer Go.”

The price for this all-out show stopper is $49,995, which the seller says is way under what this sort of thing usually goes for. I’ll take the dealer’s word for it since I really have no basis for comparison.