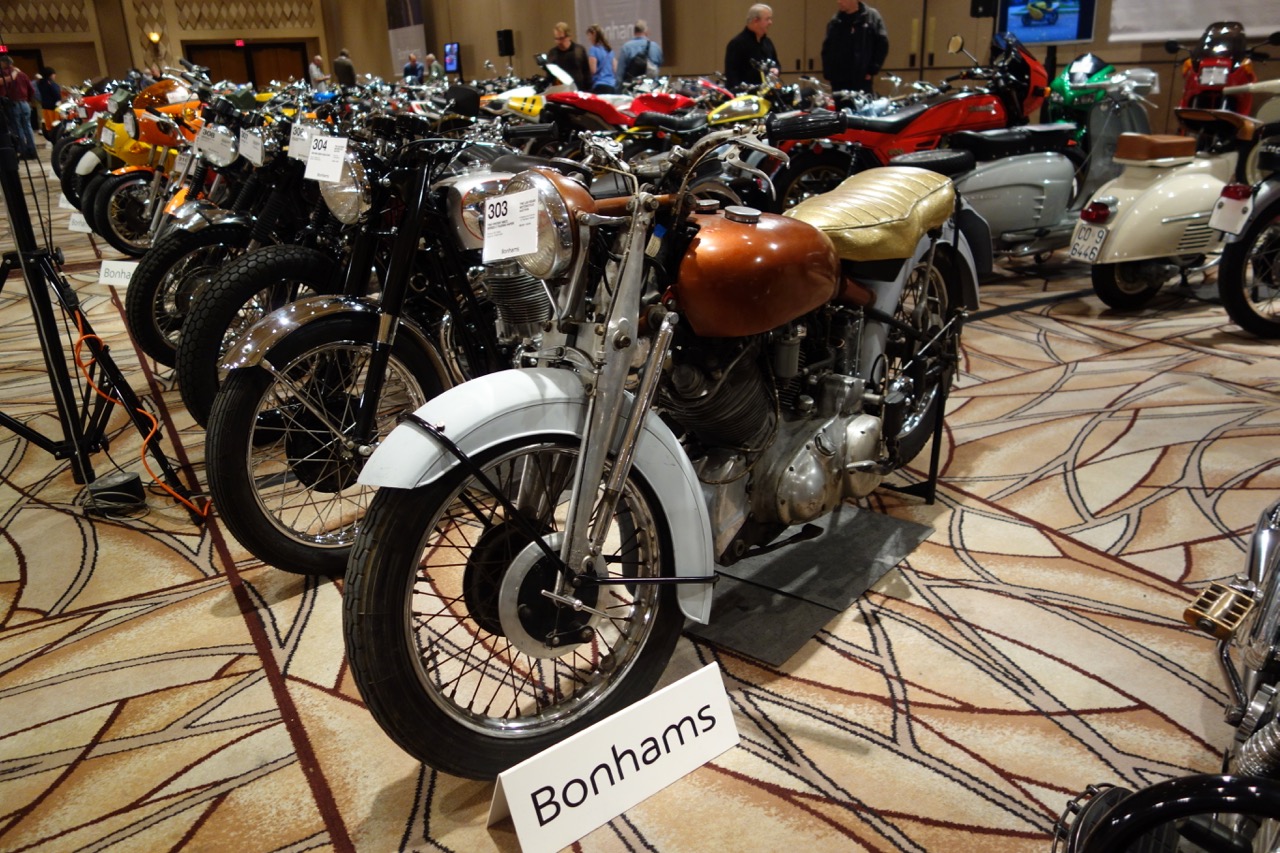 I attended the vintage motorcycle auctions last week in Las Vegas and saw that while some things are a bit softer than last year, in many cases it had more to do with the quality of the offering than with the market itself.

Let’s start with some numbers. Bonhams’ Las Vegas auction had what it called a good but not great sale, with a 70 percent sell-through rate and about $4 million in sales. A number of high-profile bikes didn’t sell, including a Crocker which was bid to more than $300,000 but failed to go to a new home.

One suggestion I would make for this sale — in fact, it would help other auctions as well — would be to take a page out of the Mecum playbook and set up an on offer area where buyers could see all the unsold bikes in one place, with a few representatives from the auction house on hand to assist in closing deals.

The other suggestion I would make would be to have someone, perhaps Bonhams specialist Nick Smith, doing color commentary on each bike as it reaches the block. If you take a bit of time to let people know why they desperately need something, they are much more likely to buy it. Also, it would help to have that second person on the auction block assist the auctioneer in recognizing bids that are out of his line of sight.

Oh, one more thing: My favorite bike at Bonhams was a 1970 Honda CB350 that sold for $6,325. This was a bike offered by Richard Baccus and the staff at Motorcycle Classics magazine as a charity item. The bike was nicely restored but not so much that you still couldn’t use it.

Meanwhile, Mecum worked its usual magic in Las Vegas and again had a great sale. Sales totaled $13.7 million (not counting buyer’s fees) with a 92 percent sell-through rate for the nearly 1,000 motorcycles on offer. These are great numbers and show that if you bring something at every price point you will sell a lot of bikes.

This and other Yamaha XS650’s brought more money than expected

I spotted what I believe are a few market trends at the Las Vegas sales:

I bid on a 1948 Vincent Rapide that had some issues but I backed off after receiving a text from my wife — “don’t even think about it.” I’d just bid $30,000 and she’d just started watching the sale live on the web and saw me ready to bid again. She knew I wanted that bike, but I have learned that when she says no she means no so I put my hand down and a lucky bidder was able to steal it for $34,000.

My favorite bike at Mecum was a bike I did not know existed until I saw it there. It was a 1976 MV Agusta 350 S Ipotesi that sold for a very fair $8,000. I sadly only saw it after it had sold or it would be in my garage.

Mecum has become one of my favorites among the big auction companies. It’s friendly people make you immediately feel like part of the family and somehow they do a huge volume business while providing a Nordstrom-level of customer service The auction is also a lot of fun.

If you love motorcycles as much as I do, then you will not want to miss Las Vegas auction week. You not only can you find some great deals, see and possibly buy some of the most famous motorcycles in the world, but also will go home with tons of new friends in the classic motorcycle hobby. How can you beat all that?