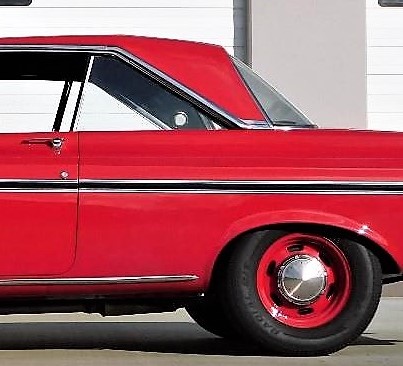 The Pick of the Day is a classic piece of big-block Mopar muscle, a 1965 Plymouth Belvedere II hardtop that looks like it just rolled off a ’60s drag strip. Powered by a 440cid V8 with performance tweaks, and its body and interior in stock trim, this Plymouth looks ready to blow the doors off all comers.

The midsize Belvedere has a great look for a no-nonsense performance car, with its razor-sharp body design and stark roofline. The unadorned style only adds to the implied message of massive power lurking within.

“With factory trim and painted-to-match steel wheels wrapped in Plymouth Division dog-dish style hubcaps, this 1965 Plymouth for sale looks like your typical muscle car of the ’60s: simple, clean and tough,” says the Atlanta dealer advertising the car on ClassicCars.com.

Though not the vaunted 426 Hemi, which raises the ante considerably for Mopar muscle cars, the Super Commando 440 V8 – as Plymouth called the high-performance big block – was introduced in 1965, so this Belvedere would have boasted major bragging rights when it first rumbled into the neighborhood.

The engine has been enhanced with an Edelbrock Torker performance air intake, Quick Fuel double-pumper carburetor and an MSD blaster coil, says the seller says, so that, “you’ll see how the extra fuel, fire and air adds to the horsepower and massive torque that this big-block Mopar delivers.”

The engine is linked to a Torqueflite 727 heavy-duty three-speed automatic transmission with a B&M Quicksilver shifter, the hot setup for straight-line performance.

The interior continues the theme of simple-but-effective, a total muscle-car treatment with a vinyl-covered bench seat, plain dash with a few auxiliary gauges and a set of lap belts, much as it would have been for either date night or track time. Besides the Sunpro gauge cluster, an aftermarket AM/FM radio with CD player has been added.

Authenticity is an all-important requirement for classic muscle-car values, although the listing does not specify whether this is a factory 440 Belvedere or a nicely done replica.

Whatever the case, the asking price of $25,995 seems reasonable for this pure example of classic Mopar performance from the middle of the muscle-car decade.