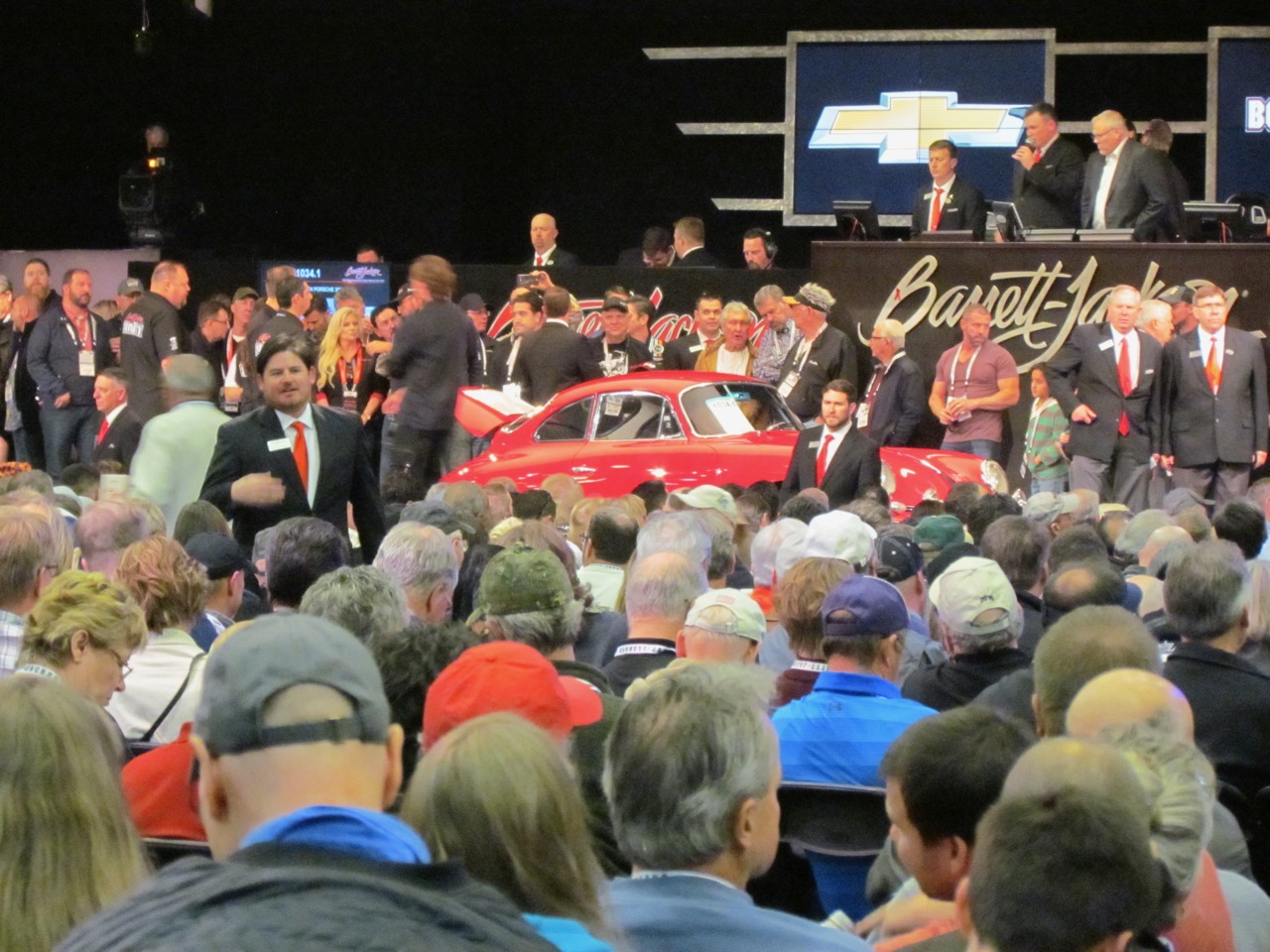 Barrett-Jackson is a world unto itself | Larry Edsall photo

The final results from the Scottsdale auctions held during Arizona Car Week are in, and it looks like the total sales numbers are $262.8 million this year compared with $250 million last year. So, it looks like the market is climbing and all is great.

But if you actually attended the auctions, you probably have a different opinion about the pulse of the collector car marketplace.

First, there is the exception to whatever is taking place in the market, and that’s Barrett-Jackson, which seemingly can sell any car for good money. It proved this again this year, earning super-strong money for a number of cars across a wide range.

But this is what Barrett-Jackson does, and it does it very well. But I have to point out that the bidders attending Barrett-Jackson are different from those attending the other sales. People go to Barrett-Jackson because it is an event, a destination in and of itself. It’s like going to Disneyland, except you can have a great time while also buying a car — or three.

That being said, some Barrett-Jackson bidders are starting to change their tastes, chasing better-quality and rarer cars, especially in the muscle-car segment. The biggest indication of this I saw while there was the restive lack of interest the buyers had for 1968-1970 “Shelby” Mustangs. These Mustangs actually were built by Ford directly and lack the allure of the ’65-’67 Shelby-constructed cars. The prices for these cars looked to be down across the board, something that serious Shelby collectors saw coming for quite a while. Not a bad thing, just a case of the market coming back to some sense of reality.

The Salon cars at Barrett all seemed to do exceptionally well. The too-much-money standout was the 1964 Aston Martin DB5 that sold for $1.49 million. This car would have sold for far less at Gooding & Company or RM Sotheby’s. The other David Brown Aston for sale at Barrett-Jackson, a significant 1968 DB6 that the bidders apparently did not fully appreciate, was bid to $475,000 but did not meet reserve.

Personally, I am pleased about the continued success of Barrett-Jackson and love that it continues to bring new collectors into the marketplace.

Russo and Steele seemed to have a great auction with strong sales and improved cars. If you wanted any car no matter what your taste and style, Russo and Steele had it and likely at an affordable though market-correct price. In its new, improved location, Russo did very well with some of its top sales, including a 1954 Mercedes-Benz 300S cabriolet that sold for $423,500, a 1973 Ferrari Dino 246 GTS Spider that sold for $379,500, and a stunning 1969 Ford Mustang Boss 429 SportsRoof that sold for $335,500.

RM Sotheby’s learned a few things over the week. First, that it is great at selling modern classics, with a number of contemporary supercars going for very strong money, and second, that even when it offers up a large number of impressive and rare muscle cars, the Barrett-Jackson bidders do not travel from WestWorld to the Arizona Biltmore to buy them, even when they are offered at no reserve.

RM Sotheby’s continues to bring some of the best cars to auction and to sell them for strong money. Some of these included a stunning 1967 Ferrari 330 GTS Spider that sold for $2.5 million, a 1961 Ferrari 400 Superamerica coupe that sold for $3 million – my favorite car of the sale – and their top sale of the week, a 1939 Mercedes-Benz 540K Special Roadster that sold for $6.6 million.

Gooding & Company demonstrated that if you want to sell an excellent example of a fairly mundane model — think the yellow Porsche 912 — for record money, it is the place to consign it. At $114,400, that sale is probably the most money ever paid for a Porsche 912, the four-cylinder version of the 911, and is likely going to be the record for a long time.
Gooding also seems to be the place to sell a Bugatti; the $3.3 spent for the 1925 Type 35 Grand Prix car is another record, though a well-deserved one.

Barn finds also do well at Gooding. The $341,000 paid for a derelict 1958 Porsche Speedster is a huge price for a car needing everything. No one does a better job with these types of cars, and I honestly have no idea how they do it.

The newest auction in town, Worldwide Auctioneers, got off to a great start with the inaugural sale producing $11.5 million. Not bad for a first timer in this crowded week of seven auctions. The standouts of that sale were the amazing realized price for a yard-find Aston Martin DB4 at $374,000 and the 1967 Chevrolet Corvette 427/430 convertible that sold for nearly $2 million. Both of these are top-of-the-market prices and an excellent result for a newcomer to Arizona.

On the block at Bonhams | Andy Reid photo

The surprise of the week was Bonhams. Bonhams seemed to have the very best variety of cars and some of the most important cars available during Arizona Car Week. It also had the highest sales of the week, a 1963 Jaguar E-type Lightweight that sold for $7,370,000 (and even that would have been surpassed had the consignor accepted an eight-figure bid on a short-wheelbase Ferrari California Spider).

For Bonhams to post the top sale was quite an accomplishment during a week when RM Sotheby’s and Gooding are the powerhouses in high-end transactions.

These cars were in addition to my other favorites, the 1955 Austin Healey 100S sports racer that reached $539,000 and the 1984 Ferrari 308 GTS QV that was used in the TV series Magnum P.I., sold for $181,500. Both were bought for strong money, but in a few years, those prices could look like tremendous deals.

Out in Fountain Hills, northeast of Scottsdale, Mitch Silver stages his annual auction, where he specializes in entry-level vehicles that snowbirds can buy, drive and then sell in the spring at Silver’s other Arizona auction as they head home. Interesting that the average sales price at Silver this year was more than $15,000, up around two grand from a year ago.

Those are the numbers, but more important were a number of trends I saw during the week.

The first was that Enzo-era Ferrari 2+2 cars are definitely down and leveled at what looks to be the $225,000 to $250,000 mark. I will say that this is something I have seen coming, and to me it creates a more stable market.

The next trend was in Jaguar E-types. These cars are again selling in the $150,000 to $200,000 range and again, this is likely where they belong. Sure, early flat-floor and side-latch cars will sell for more, but E-types have settled and seem likely to stay there.

As mentioned above, ’68-’70 Shelby Mustangs are selling for less money than before, for the most part just reaching the $100,000 mark. These are the later Ford-constructed cars rather than the earlier Shelby creations and should be selling at this price, down from the inflated prices they had been trading for at auction.

Another trend I noticed is the continued decrease in value of the 1980s Ferrari Testarossas. These cars, with a few notable exceptions (low miles, single-mirror cars) can be bought for $100,000, which is what they should have been anyway.

Finally, in case you have not noticed, modern supercars are continuing to rise in value. This is a trend that has continued to accelerate and will likely keep moving over the coming year.

Bottom line from Arizona auctions: While a number of cars have experienced some reduction in value, those reductions could well make for a more stable and reasonable collector car marketplace.