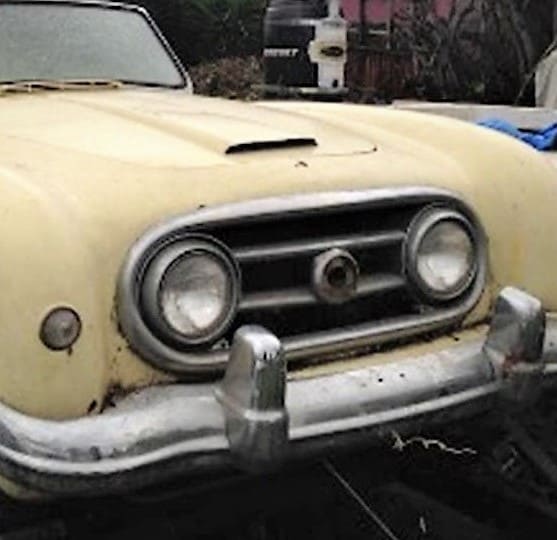 Barn-find classics continue to be fascinating outliers in the collector car market, the romantic lure of a desirable car presented in as-found condition seeming to trump common sense. What used to be ratty restoration candidates have become collector’s items.

One such car sold during Arizona Car Week was a derelict 1958 Porsche 356 A Speedster all primered up with a rat’s nest interior that went for an amazing $341,000. This was not a car with a lovely patina that you could drive in shabby-chic glory but something you’d want to rush off to the restoration shop ASAP. Yes, Porsche Speedsters are crazy valuable, but that price was a stretch.

The Pick of the Day is another needy example of a great collector car, a 1953 Nash-Healey roadster that looks like it’s been off the road for many years yet remains in reasonably intact condition. The upholstery looks like it’s been gnawed by beavers, but the body seems straight in the photos accompanying the ad on ClassicCars.com.

The Nash Healey was a product cooked up between British automotive great Donald Healey (later of Austin Healey fame) and George Mason, the head of U.S. automaker Nash Motors. Using the stout, 140-horsepower straight-six engine that powered the large Nash Ambassador, the Nash-Healey was manufactured between 1951 and 1954, with just 506 produced.

The roadster started out with a body designed by a British firm, but it was restyled for 1952 by Italian designer Pinin Farina, and to beautiful effect that combines the signature oval grille of Nash’s automobiles with the latest in sports car styling.

This one offered by a dealer in Astoria, New York, seems like a decent candidate for a refurbishment. The seller says it recently came out of long-term storage and “is a very honest and original example for straightforward restoration.”

Nash-Healeys are cool and desirable but not terrifically valuable, certainly not Porsche Speedster level. A 1953 model in perfect condition tops out at $130,000, or $105,000 for a good one, according to the latest Hagerty Price Guide.

The asking price of $49,500 is about in line with what the price guide says such a project car is worth, but anyone considering taking on the restoration should run the numbers first. Professional restorations are very expensive, and the buyer could quickly go underwater.

But if you love this car and are equipped to do much of the work yourself, I’d say go for it and the heck with the numbers. That’s why they call this a hobby. In the end you’d have a rare and attractive Anglo-America sports car that you could drive with pride.