At auction: ‘The Duesenberg of motorcycles’ 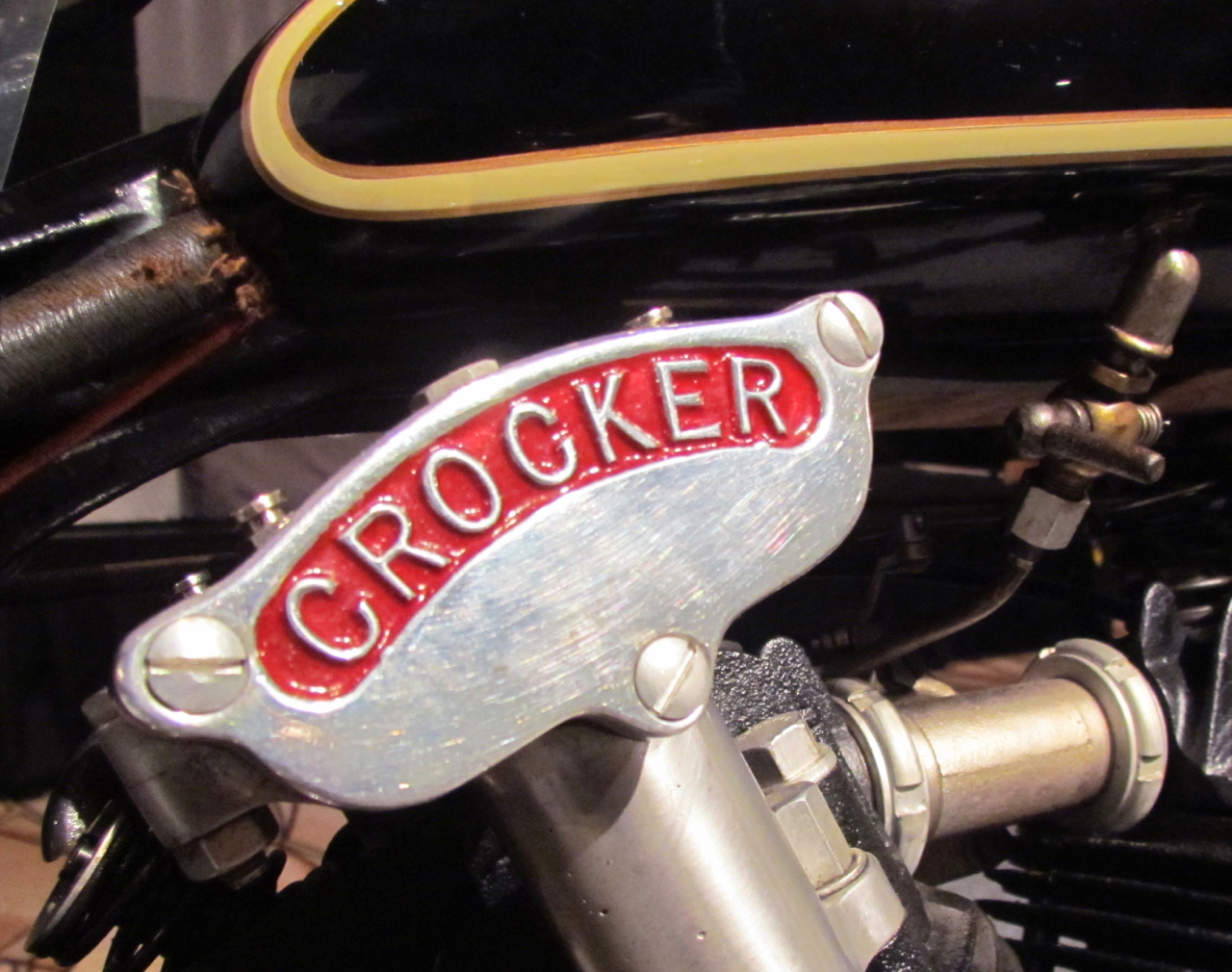 Perhaps it’s enough for car guys to learn that the Crocker is considered “the Duesenberg of motorcycles.” Yes, the brand was that big of a deal with those who were fortunate enough to have bought one of the rare machines back in the 1930s and early ’40s, and it remains true for those who acquire one today on the rare occasions when they are available at vintage motorcycle auctions.

What brings this all up is the Bonhams’ seventh annual Las Vegas Motorcycle Auction, which was held Thursday in the convention center of the Rio Hotel and Casino. Featured was a 1937 Crocker small-tank hemi-head V-twin.Crocker took its name from Albert Crocker, who worked as an engineer at Thor and Indian before moving west and founding his own motorcycle company in Los Angeles in 1932, at first making single-cylinder speedway bikes. But in 1936, Crocker and his cohort, Paul “P.A.” Bigsby, launched an amazing series of V-twin road bikes.

Oh, and if Bigsby’s name might seem familiar, it’s most likely because after Crocker Motorcycle Co. closed because it could not get a sufficient supply of bike building materials after the United States was drawn into World War II, Bigsby created the Bigsby vibrato tailpiece, aka the “whammy bar,” for electric guitars.

As for Crocker, he produced some “Scootabout” motor scooters and turned his shop to producing parts for Douglas Aircraft and its wartime airplane production, and later sold his business to Borg Warner.

Among those attending the Bonhams auction was Don Wayland, a Crocker expert — he’s owned 11 of the bikes — who learned about the brand from Chuck Vernon, an original Crocker customer — he owned No. 01 — and the founder of the Crocker Register.

Asked what made Crockers so special, Wayland shared this story: When Vernon was 92, he was asked why in the world, back in the day, he’d ever quit riding his 1936 Harley Knucklehead and switched to his first Crocker.

“Because I rode one,” Vernon responded with a big smile.

Such was the difference between a Crocker and anything else on two wheels.

Crocker and Bigsby powered their road bikes with a hemi-headed, V-twin engine that produced around 60 horsepower and could propel the bikes to speeds of 120 miles per hour. The first such Crocker debuted at the Muroc Dry Lake races, where it was an astounding 10-15 mph faster than any of its competitors.

As a result, Crocker promised that if any of his customers ever were beaten by a stock Indian or Harley-Davidson motorcycle, Crocker would refund their full purchase price. There were no reports of anyone ever asking him for the refund.

Every major component of the Crockers was produced at the company’s LA workshop. The bikes were hand-built and limited-production, with fewer than 100 of the V-twin road machines produced and with perhaps 41 still known to exist. Of them, only six are equipped with the hemi-head engines.

One such bike, then part of the famed Otis Chandler collection, was displayed within the The Art of the Motorcycle exhibition staged from 1998-2001 by the Guggenheim Museums — in New York City, Bilboa, Spain and Las Vegas — with an additional stop at the Field Museum of Natural History in Chicago.

The exhibition’s massive 497-page catalog reported of the Crocker that, “the big boulevard cruiser represents a milestone in motorcycle design; it was a forerunner of the postwar custom motorcycle as well as the modern superbike.”

The Crocker crossing the block Thursday at Bonhams’ Las Vegas auction was consigned by Dale Walksler, founder and curator of the Wheels Through Time Museum in Maggie Valley, North Carolina. The bike’s serial number — 36 -61-8 — indicates it is only the eighth V-twin built. It also is the lowest number of the Crocker V-twins ever offered at public auction.

The bike had a pre-sale estimated value of $500,000 to $600,000 but bidding Thursday did not reach the reserve price, so the Crocker goes back home to the museum with Walksler..

“My feeling is all about education,” Walksler said as he awaited the start of the auction. “There were only 22 hemi-head Crockers ever built. Some were converted in the ’30s to a later Crocker head, leaving only six remaining that have the hemi heads.

“I have two,” he added, noting that he also has No. 22 in his museum, where he displays some 400 vintage motorcycles.

Walksler grew up in suburban Chicago, where he had a small motorcycle shop. In 1977 he opened a Harley-Davidson dealership in downstate Illinois. After 24 years, he sold that business in 2000 and considered moving to a variety of warmer places. Figuring that Vanderbilt was on to something when he built the Biltmore estate in the Blue Ridge Mountains, Walksler opened his motorcycle museum to the west of Asheville, between there and the Gatlinburg/Pigeon Forge tourism area of Tennessee. He also has hosted television shows on the History and Velocity channels.

The museum is about a 90-minute ride from the famed Tail of the Dragon motorcycle-riding and sports car-driving mecca, and Walksler said quite a few people combine a visit to the museum with their trip on the Tail, to the point that his museum, open five days a week for eight months of the year, draws an average of 500 people a day.
What does he do the other four months?

“Many of the Crockers had been amalgamated into different combinations,” Walksler said of his work to salvage and restore his pair. “I took a crooked line and make it straight.”