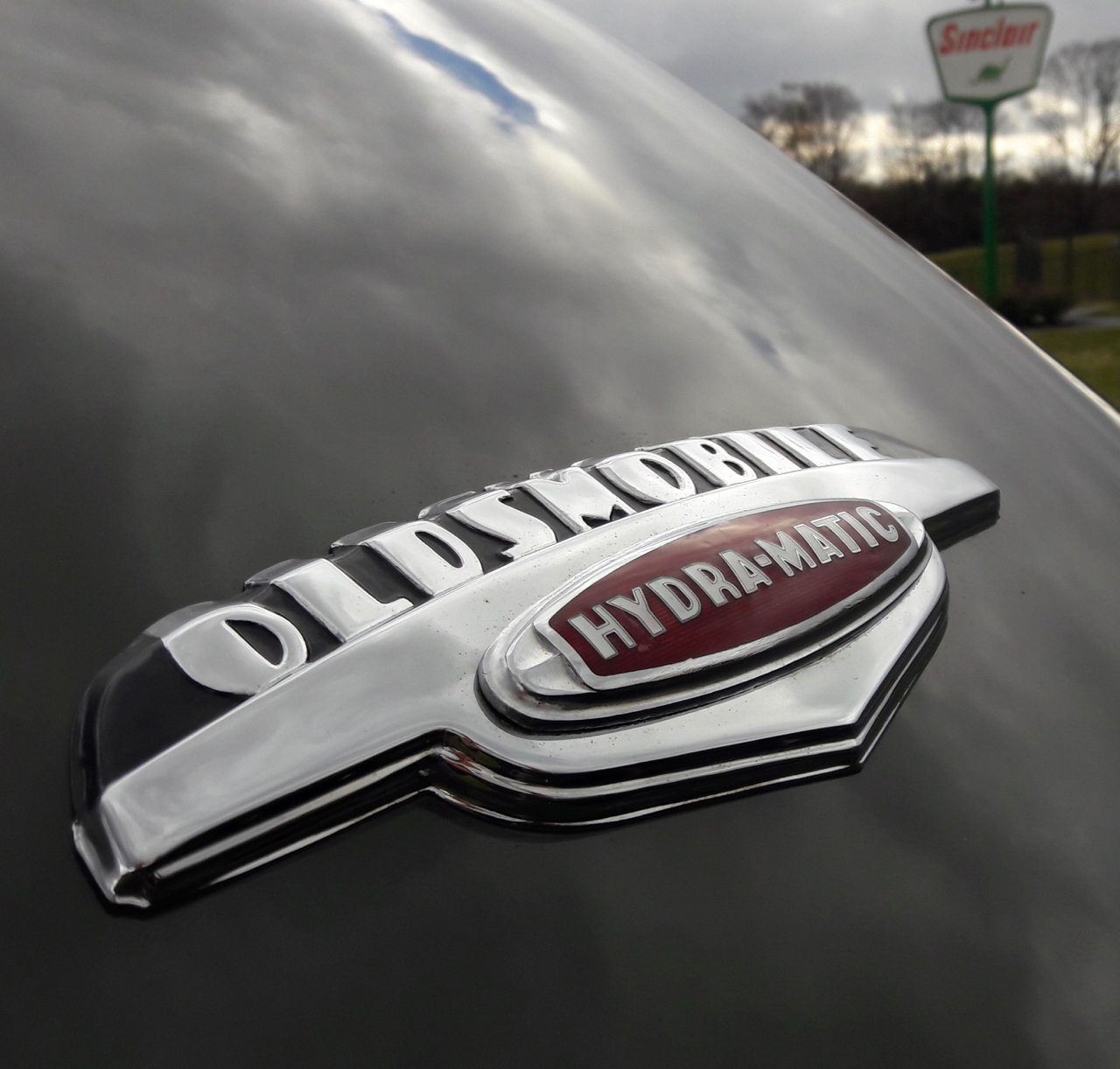 For automotive purists, now might be the time to look away. That’s because standing right in front of you is the car that helped bring automatic shifting to the masses. While the sleek Art Deco exterior of this 1942 Oldsmobile is striking, it’s what connects car’s inline8-cylinder engine to the rear wheels that makes this truly an historic automobile.

When it was introduced for the 1940 model year, the Hydra-Matic transmission totally transformed how we drove our cars, plain and simple. It changed driving habits by offering an easier, no muss and no fuss (i.e. no grinding gears) approach to getting from one place to another.

It also makes cars like this Custom Cruiser Club Sedan unsung heroes of the car world – well, at least for those who hate having a clutch pedal.

With the U.S. industrial complex fully committed to World War II, the 1942 model year would be the shortest in the history of the American automobile market. By the time General Motors and its Oldsmobile division shifted production entirely to helping the war effort, only 1,771 of these Club Sedans had rolled down the assembly line.

According to the records of the NB Center in Allentown, Pennsylvania, where this car resides, this example is one of only three known to exist. Having joined the collection in April 2010, the car has been repainted in a period-correct color combination, and the interior was given a sympathetic restoration.

Of course, this being a Bulgari-owned machine, this Olds looks brand new from any angle. And trust us, this car has lots of angles you want to admire.

The swept-back lines of this 2-door Oldsmobile give it a stately elegance that’s unexpected when you consider it was such a mainstream automobile back in its day. That gently tapering tail is the most visually arresting aspect of the car, and the two-tone paint job makes for a perfect contrast between the car’s upper and lower surfaces.

It’s achingly pretty, but in an extremely subtle way. Look at the side profile and you’ll see what we mean. The front fenders end smack in the middle of each door, while the bulge of the rear fenders begins at the mid-point of the back windows. This gives this classy Olds a wonderfully balanced look, front and rear, and the lack of too much chrome ornamentation only accentuates the graceful design.

Heck, this car isn’t even wearing white-wall tires, for crying out loud!

You have to love the red and silver brightwork found on the front grille, each wheel, and along the flanks of the Olds. Again, it’s a little flashy, but also restrained.

Only the front grille appears confused, like two competing design teams had different ideas but came to a compromise right about where the Oldsmobile name is spelled out in blocky, bold, and bright-red lettering. The vintage (pre-rocket style) Oldsmobile emblem set into a clear acrylic hood ornament was a tempting souvenir, though we wisely opted to start driving the car, rather than taking it apart when no one was looking.

True to its advertising, this Olds makes driving a breeze. The 257-cubic-inch straight-8 has decent grunt and the suspension keeps the car nice and level in corners – credit goes to the NB Center’s incredible maintenance team, too. But it’s the gearbox that makes this car a revolution to drive now , and when it was brand new 75 years ago.

The Hydra-Matic was the world’s first mass-produced automatic transmission. Oldsmobile was the first recipient of this gearbox and, by the time Olds had ceased producing cars early in 1942, roughly 200,000 examples had already found homes.

A fully automatic transmission was touted as being safer, more economical, smoother, and less stressful to drive. Early ads made a big deal about what wasn’t in the car – namely, a clutch pedal. To drive the point home, many adverts featured close-up photos or drawings of the empty space where a third pedal would normally have resided. It’s not often car companies stress the importance of something that isn’t there, but that was the case when the Hydra-Matic burst onto the scene.

In operation, all you need to do is slot the column-mounted shift into D for drive, and away you go. The four-speed automatic ambles along, while the hydraulics do the heavy work of rowing through the gears. An available Low setting keeps the gearbox in only its first two gears. Yet with clear skies, no snow on the ground, and an empty test track at our disposal, we did what someone in 1942 would have done; pop the gearbox into Drive, and forget it.

Much like the exterior, the cabin is swimming in delicious Art Deco details, such as the font used for the Oldsmobile name on the large Bakelite-rimmed steering wheel, to the perfectly symmetrical oval-shaped binnacles in front of the driver and front passenger.

This model did without a radio when it was new, as seen by the blanking plates toward the bottom of the center of the dash. It’s interesting to speculate whether this decision – along with the plain black-wall tires – was due to a frugal owner, or if the move to wartime production was limiting the availability of optional frills that could be applied to this Olds.

Whatever the case, this car paved the way for generations of Americans who gladly gave up on shifting. We know, that’s half the fun, right? Try not to hold it against this handsome Olds, or the Hydra-Matic hiding under the hood.