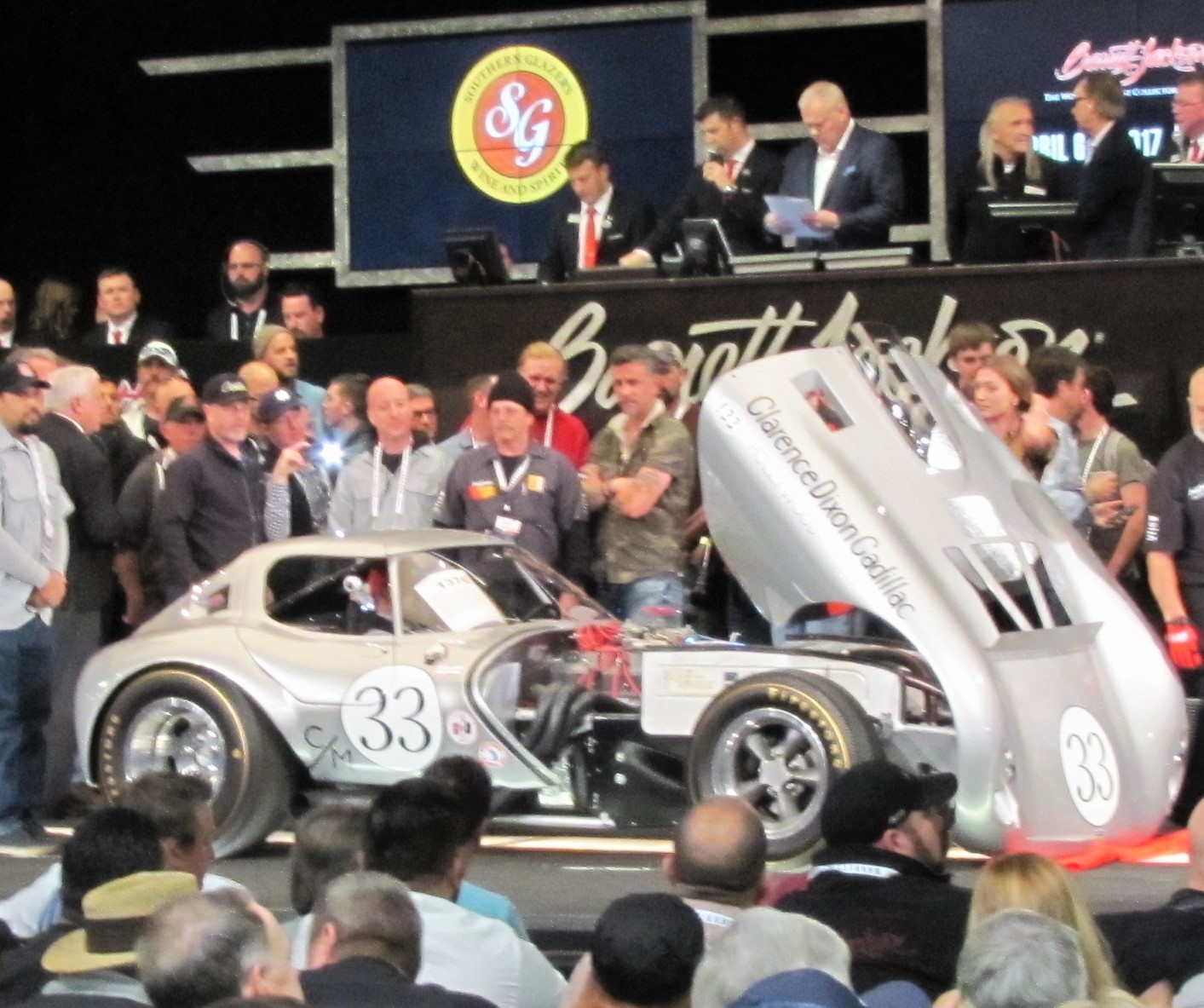 Barrett-Jackson Scottsdale is a collector-car auction like no other, as brassy and oversized as a 1959 Cadillac Eldorado, as crowded with passionate fans as a political convention, and as packed with popular attractions as a state fair. There’s no Ferris wheel, but there should be.

From barbecued turkey legs to the most pristine of vintage automobiles, Barrett-Jackson excels in what it does best: attracting the most folks to the collector car hobby. It does so by way of a grand, sprawling spectacle that attracts 200,000 ticket holders each year to the Scottsdale venue as well as what has become a global audience of millions of TV watchers.

The Scottsdale auction is a bucket-list destination for many car enthusiasts, and the 46th annual event held last week did not disappoint. Whatever happened with the numbers – the sell-through rate was 99 percent because of the overwhelming percentage of no reserve vehicles, a Barrett-Jackson hallmark – or the prices – which were all over the board – were essentially irrelevant to the popular enjoyment of the auction event extravaganza.

Just being there, feeling the pulse of the intense, standing-room-only crowd in the gigantic WestWorld equestrian center and seeing close-up the desirable vehicles as they cross over the block on their way to new ownership, is plenty of excitement for most people. Or enjoying the vicarious thrill of the hunt by cheering wildly as the bids climb into the stratosphere,

That, and the many celebrities who pass through. This year, they included pop idol Justin Bieber, another appearance by an aging Burt Reynolds with a “Bandit” Trans Am, boxing champion Floyd Mayweather and his Bugatti Veyron, NASCAR racer Dale Earnhardt Jr., and rock star Steven Tyler of Aerosmith, who rode triumphantly on stage atop his ultra-exotic Venom GT Spyder, which sold to benefit a charity for abused women and girls.

This was my 28th go round with the Barrett-Jackson Scottsdale auction, which I first attended as an automotive writer in 1990. Things were a bit more homespun in those days, with a heavy emphasis on pre-war classic cars and early vehicles, something that has given way to today’s crop of muscle cars, sports cars, cruisers from the 1950s and ’60s, customs and exotics, with only a smattering of the full-fendered old beauties that once ruled the road, and the collector car market.

The event evolves every year, yet with a comfortable sameness as it gradually transitions in size, style and direction during Arizona Car Week. For many people, Barrett-Jackson is Arizona Car Week, despite there being six other full-scale collector car auctions – the most anywhere – as well as a world-class concours d’elegance that gets things started on the opening Sunday.

Here are some random observations after watching among the throng during prime-time Saturday at the Barrett-Jackson auction:

The crowds – “The crowd will get so thick you couldn’t stir it with a stick,” said one security guard, her soft Southern drawl revealing the roots of that folksy expression, as people rolled in for the sale on the day when the most-valuable cars of the auction would go on stage.

It does get remarkably crowded in the gigantic WestWorld building. About a decade ago, while surveying the erection of a monster tent with auction chief Craig Jackson, son of Russ Jackson, who started this whole thing with business partner Tom Barrett, I remarked about what a huge volume of space was becoming available.

Jackson looked doubtful as he retooled a line from Jaws: “We’re gonna need a bigger tent.”

Sure enough, in no time the auction had outgrown that one, replaced by a much-bigger semi-permanent tent structure, which was then supplemented a few years later by the City of Scottsdale with the voluminous current building, bigger than many big-city sports arenas, to which the auction company attached another quarter-mile of tents.

Yet even now, the main auction area gets jammed with people. Absolute human gridlock, like that of a major rock concert. Indeed, Barrett-Jackson is sometimes referred to as the Super Bowl of collector car auctions. The outside grounds and the tents where the cars are parked are jammed with people as well.

The cars – As usual, this year’s crop was heavy on mid-level domestic cars from the ’50s through the early ’70s, the sweet spot for boomer-generation interest. Muscle cars, resto rods and custom creations including all-out street rods got a lot of attention. So were nicely restored or rodded pickup trucks, primarily from the ’50s, which reflected a growing interest.

The Salon cars collection of the auction’s top-drawer offerings was not as impressive as in past years, however. There were some exceptional cars, but not the eye-popping stars that have come to define this part of the offerings.

Yet among them was one my favorites of the entire auction, the lovely Gilda. That’s the nickname for the experimental 1953 Chrysler Ghia Streamline X, which is powered by a jet-style turbine engine and wears lofty tailfins that previewed those that would sprout on production cars later in the decade. A most evocative concept car and a true historic artifact, this was a striking highlight of the Salon collection.

But like a number of the higher-priced cars that bore reserve prices, Gilda failed to reach expectation and at $900,000 rolled off the block as a no sale.

All that says either the sellers were setting the bar too high as values of some high-end cars have faded, or that the buyers weren’t there at the moment. Since so many of them failed to sell, I’d say it’s the former, that sellers need to accept reality.

The classics – I was chagrinned to see so many really nice old cars from the 1930s selling for a relative pittance. Not cheap, but still a lot less than I thought they deserved, which is also reflective of the latest trends in the collector car marketplace. Such cars as a gorgeously restored 1934 Ford roadster went for $52,800, and an exceptional 1941 Cadillac convertible coupe for $60,500.

Strange sightings – As always, Barrett-Jackson showed its share of weirdness. The most bizarre vehicle on the floor by far was the 1971 Ford Torino that an artist had transformed into a, well, into something bizarre. It was caked and coated with some kind of shiny silver plastic, sculpted into organic shapes, and looked nothing like an actual automobile. It attracted a continuous flow of spectators, who were less awed that appalled.

The description of the car was high on pretension and low on explanation: “The 3D-printed liquid-metal Ford Torino incorporates technology from the Second and Third Industrial Revolutions by combining a classic assembly-line vehicle with modern specialized technologies.

“Florea’s artwork is culture on wheels, showing how the use of many technologies and materials reflects today’s globalization.”

Yeah, right. Oh, and one other thing. It doesn’t run.

The majesty of this artwork apparently was not appreciated by the bidders as it sold for just $5,000. That’s considerably less than a Cezanne or a Jackson Pollock.

Another strikingly odd vehicle was the 2000 Hummer H1 that had been customized into a hulking beast that the seller calls the “ultimate exotic hunting vehicle.” And what would one hunt using such a large and militaristic truck with gullwing doors?

How about zombies? “Zombie Outbreak Response Team,” it says on its fenders.

Somebody apparently thought this was a good idea since it sold for more than $78,000.

Animals – While I didn’t spot any parrots or monkeys, as I have in the past at Barrett-Jackson, I did have some dog sightings. My favorite was an apparent mother/daughter team that walked a pair of standard poodles, fully clipped poodle style, one black and one white. The women were dressed to match, one in black, one in white.

I saw a guy with a monumental-sized Great Dane, which looked sort of weirded out by its unaccustomed surroundings. Really, who brings large dogs to mingle among the crowd at Barrett-Jackson? Seems like a hassle. And potentially messy.

Then there was the surreal experience of passing through a doorway and suddenly finding myself no longer at a raucous car auction but at a gentler competition of prancing Arabian horses in the WestWorld facility’s indoor rodeo area. Only in Scottsdale would such a thing occur.

But that’s Barrett-Jackson for you, offering a sensory overload of automobiles and people, lots and lots of people.