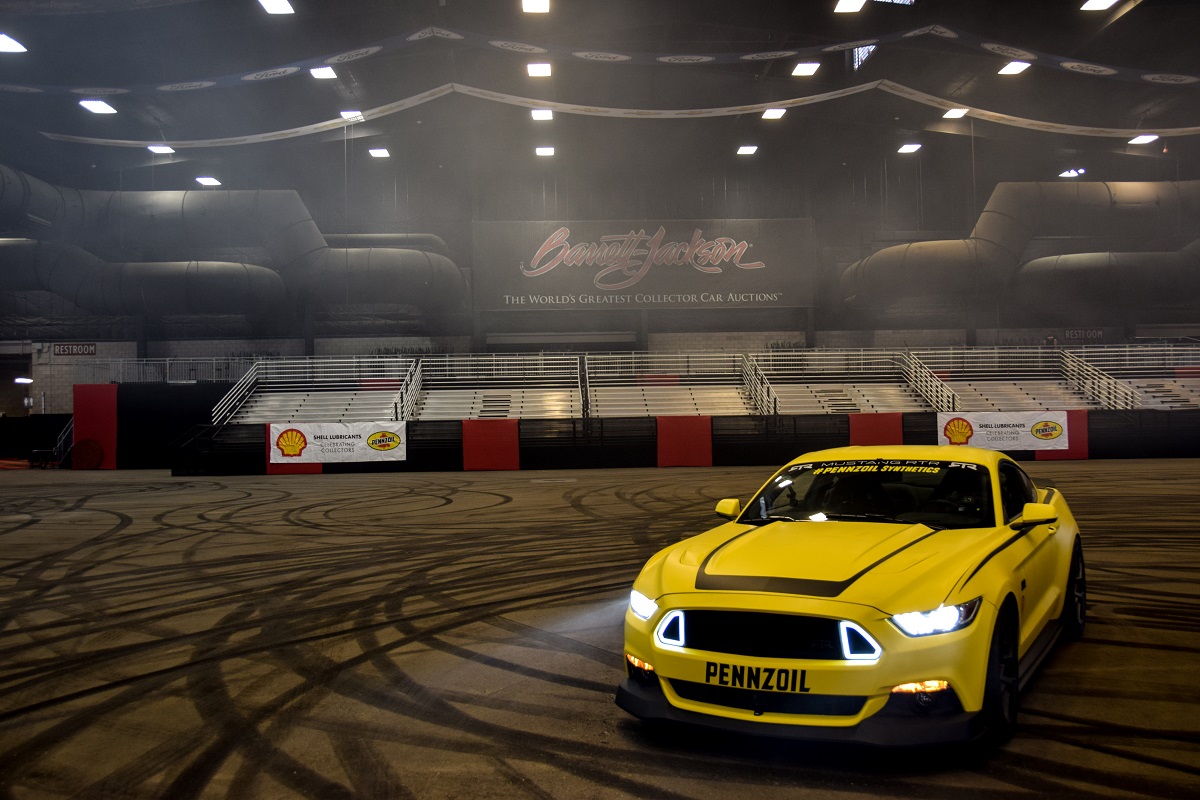 In the video, Gittin slides not only around paved parking areas, but inside the big Barrett-Jackson tent, slides sideways through narrow door openings and even lays rubber in the big arena where the auction takes place.

At one point he even slides his car to a stop next to a million-dollar Bugatti Veyron!

“We had a call prior to shooting the video and collectively defined our goals for it,” Gittin said.  “When we got on site we did a walk through and looked at what was possible within spaces, planed out the specific locations we would film, and what we were going to do in those places with all of our goals in mind.”

Gittin said the video was shot in a single day and that he shreded through a few sets of Nitto tires during the shoot.

Gittin said filming was split into sections due to camera and production logistics, and then “the magic of editing puts everything together.”

“For me, I don’t get any practice” Gittin said. “It’s basically like ‘OK, we are going to do this now make it happen’.”

He added that, most of the time, he can perform the maneuvers needed on film the first time. However, production often requires various maneuvers be performed multiple times to get the necessary angles and to make sure the cameras are capturing the shot that will translate best onto the screen.

The Mustang used in the video was one of Gittin’s personal 2017 RTR Spec 2 Pennzoil marketing cars, which he says has the exact same performance capabilities as the RTR Spec 2 cars that will be offered in select Ford dealerships.

“I’ve driven that car before, but in general since 2005 the Ford Mustang has been an extension of my body.”

In the opening scene, Gittin performs a high-speed 360 within the auction tent. He says that scene, along with a few others, made him nervous.

“It was a bit sketchy because it was damp under the tent so the car wasn’t as responsive and things were a bit slick. Before we shot it, someone came up to me and said, ‘hey, make sure you don’t hit the tent because we don’t have any spare parts for it and the auction is in two weeks’.”

In addition to performing the 360 at 70 miles per hour in a confined area, Gittin says the scene in which he drives in between the garage doors was nerve wracking.

“I’m not sure that the video really does it justice to how tight and controlled that maneuver really was,” he said. “Those concrete walls wouldn’t have moved and if I misjudged and had hit one it would have ripped the whole back of the car off.”

Because filming was confined to a single day, any damage to the car would have stopped production and likely ended the project.

But the most potentially expensive issue, he said, involved the final shots of his car drifting around the Bugatti.

“The surface was concrete and a bit slick,” Gittin said.

“With drifting, I’m used to doing things around other vehicles in close proximity, so I’m confident in my abilities. But I could tell Craig Jackson, who owns that vehicle, was nervous and rightfully so –- it’s an expensive car. He was there and was like ‘hey Vaughn, don’t get too close.’

“My nervousness for that scene came from his.”

Gittin said it was really cool to have unrestricted access to the site and to have fun in his Mustang RTR all day.

“We had a great group of people that all worked well together to create the best thing we could.”