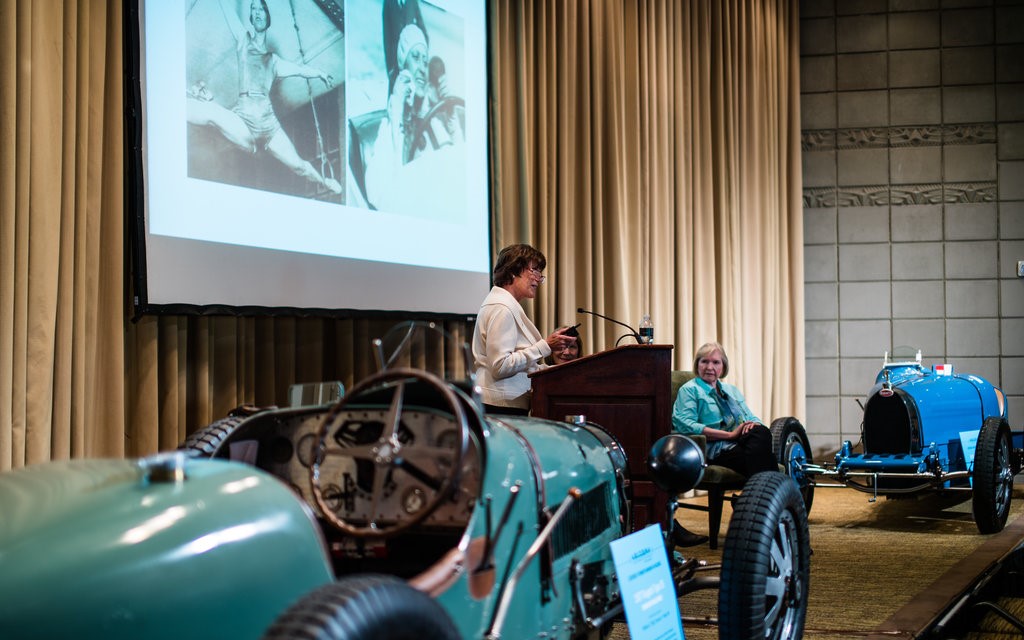 On stage with St. James were Miranda Seymoure, author of the Bugatti Queen,, and Janet Guthrie, the first woman to compete in the Indy 500 and Daytona 500 | Charles Siritho photos

The lights of the grand ballroom had been dimmed. Over hushed murmurs and the soft sound of rain, Lyn St. James’s took to the stage and said, “Over time, I learned I wasn’t so unique. When you are so often identified as the only woman in this male-dominated sport, it’s like sometimes you are just this strange person, but you don’t feel strange because you love what you do, so it becomes normal to be so unique.”

St. James added that during the prime of a racing career that included rookie-of-the-year honors in the Indianapolis 500, she didn’t know much of earlier women’s roles in racing, and admitted she was so focused on her own career. It wasn’t until after she began working with younger drivers that she realized the importance sharing history and she now makes a point to do so directly or through her traveling exhibit with the Henry Ford Museum.

Saturday, she helped put together an inspired display as part of the Arizona Concours d’Elegance, with six decades of cars that have been raced by extraordinary women.

On stage with St. James were Miranda Seymour, author of the Bugatti Queen,, and Janet Guthrie, the first woman to compete in the Indy 500 and Daytona 500, as well as a 1927 Bugatti Type 35 that had been raced by Helle Nice, a French racing legend who became known as the Bugatti Queen and eventually the subject of Seymour’s book.

Seymour shared that Helle Nice was the daughter of a postmaster and had moved to Paris in her teens and took up dancing as well as posing nude for post cards. Sometime later she suffered a dance-dooming knee injury that somehow led her to pursue auto racing.

Pannelists laughing with the audience

Nice won her frist race, the Grand Prix Féminin, and over the next decade set eight world records and competed in various rallies, races and exhibitions at circuits including Le Mans, Reims and Monza. She also drove in Grand Prix events in Paris, Monte Carlo and Morocco.

Nice was about to resume her racing career in 1949 after World War II had forced an intermission but was accused of having been a  Gestapo agent.

“Her reputation never recovered,” said the author. “Her former lovers deserted her, and she was reduced to selling tickets for a charity at seaside cinema matinee performances. She died in complete obscurity. Her name does not even appear on the family gravestone.”

The 1925 Bugatti Type 35 had been driven by Elizabeth Junek, one of the most legendary women racers of her time. She accompanied her husband, race car driver Cenek Junek, on his adventures and took the wheel after he suffered an injury. Her most famous race was the 1928 Targa Florio, in which she led until the final lap, falling short of victory only due to a mechanical issue.

The 1927 Bugatti Type 37A had been driven by Annie-Cecile Rose Itier, the most active amateur woman racecar driver between the 1920s and 1950s. She participated in various Grand Prix, hill climbs and rallies in addition to competing at Le Mans five times and in the Monte Carlo rally seven times.

The 1955 Maserati 250F had been driven by Maria Teresa de Filippis, the first woman to race Formula One. In her retirement, she was awarded the title of honorary chair of both the Maserati Club and the Formula One Grand Prix Drivers Club.

During the question and answer session, one audience member asked for the panelists’ thoughts on why the women drivers had lived such long lives and noted they had never heard of a women driver suffering a fatality during a race. St. James said that a woman will respect the car and won’t ask for more than it is capable while a man typically tends to try and get more from the car then what is capable. Guthrie agreed.

St. James said she knew of one female driver fatality on the track, a young 24-year-old with a promising career ahead of her. In a race, she suffered a mechanical issue that caused her car to slam into the wall. St James said she had that young woman’s name on a sticker in her own racing car and drive with it all season, even taking that sticker to Indy.

Dick Simon, the Indy racing team car owner who worked with both Guthrie and St. James, was in the audience, stood up and shared that he thought one of the struggles women drivers face is that no one listens to them. He remembered a time when the  team didn’t believe Guthrie that the car felt strange, so Simon, an former Indy driver, took the car out himself for a few laps and had the crew adjust the car to Guthrie’s suggestions.

However later, someone returned the car to its original setup and Guthrie had to race it that way.