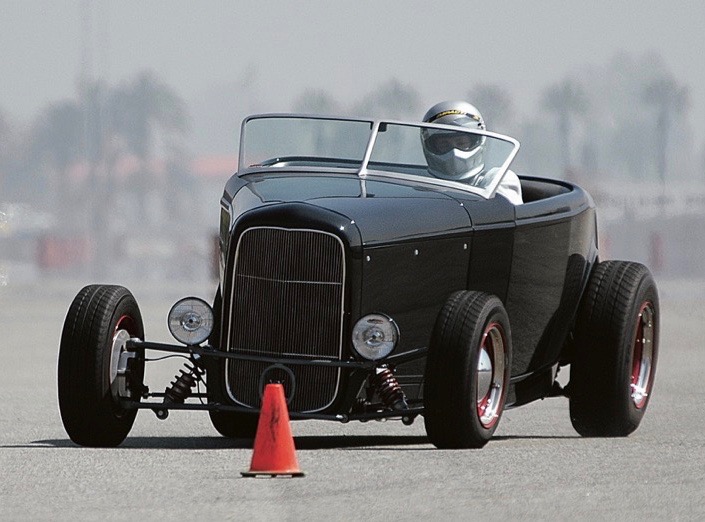 Brilliant sunshine. air cool enough to show off your favorite club jacket. and old friends with new stories brought us all together for the 32nd time on January 1 of this new year. It’s not as though you haven’t been driving your favorite ride around Southern California every weekend since January 1, 2016, it’s just a perfect morning to reflect on another year of building — or rebuilding — out of parts we’re glad someone cared enough to save; then visiting a few shops of the guys who have mastered the art.

However, this is not a “driving” event, it is a destination event planned by Larry Wood, responsible for every Hot Wheels car since the sixth one.

He knows and is admired by everyone in the hobby. His family car for these events is a 1932 Nash formal sedan, recently given a heart transplant to a big-block Chevy crate motor.

We began at Richard Grave’s shop in Long Beach, the builder of Don Prieto’s fantastic Deuxus, a Lexus LS drivetrain disguised as a perfectly detailed ’32 Ford roadster with all independent suspension and acceleration, stopping and road holding to match most current GT cars. Richard’s shop was filled to capacity with early cars and trucks to love.

A brief — and colorful — caravan entertained early hangovers on the 405 into Orange County, destination C.W. Moss and Reid’s Vintage Parts (etc.). That was a tough departure. Everyone wanted everything.

Jimmy Shine’s new shop of fantasies in the village of Orange was a high point. He has been a master craftsman most of his life and helped re-establish Alex Xydias’ So-Cal Speed Shop with his friend Pete Chapouris. We lost Chapouris on January 6, but he left us with thousands of miles of finely detailed hot rod memories — and as many trophies from America’s Most Beautiful Roadster to Pebble Beach — and he left us a national culture of rods on the road.

For those of us (virtually everyone on the drive) with ears ringing from lifetime of volatile fuel and high compression, we made a “cackle-fest” visit to Ron Cambra’s extreme horsepower Speed Shop. The Cambra team lit-off a vintage long-wheelbase dragster created for the express purpose of joining the band for harmonized, supercharged, flame-throwing, ear-piercing, radically timed entertainment and included a Willys Double-A gas coupe that generates tire smoke while raising the Db of cackle at launch and going fast quickly.

The drive continued into southern Orange County to legendary Cooks Corner for lunch among a collection of other Jan 1 drive caravans enjoying roads quite free of football fans before heading home to find the family just up and making coffee.

Why not make a plan to create your own January 1 destination drive, if only to gather in the man cave and show film of the guys who left home to make a sun-drenched life in So Cal to play with cars all year round. The snow blower will have to wait.

“I plan on reliving my youth not as it was, but as I wanted it to be.” — Don Prieto

And thus go we.