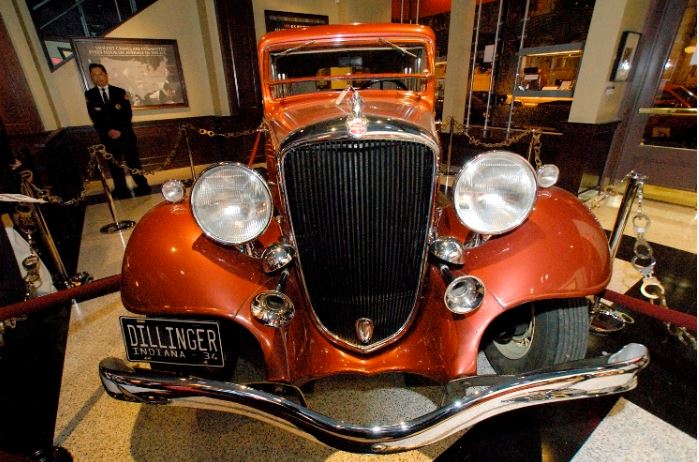 Disguised as a 19th century prison inspired by the historic Alcatraz in San Francisco Bay, Alcatraz East resides near the Margaritaville Hotel and Paula Deen’s Family Kitchen in Pigeon Forge, Tennessee.  Within the two-story museum’s 24,000-square-feet of space are more than 100 interactive exhibits covering the history of American crime, and the consequences of crime. among other things.

On Sunday, the Petersen Automotive Museum in Los Angeles holds a Shelby cruise-in on the third floor of its parking garage. The show begins at 9 a.m. and celebrates Carroll Shelby’s birthday.

The Gilmore Car Museum in Hickory Corners, Michigan, kicks off its Sunday Speaker Series at 3 p.m. this weekend with “A Brush with History” presented by aviation artist and historian, Rick Herter. Following this Sunday will be John Burton and Robin Nott on January 22, discussing  the “Dust Bowl.”

The Auburn Cord Duesenberg Automobile Museum in Auburn, Indiana, offers its behind-the-scenes tour of the museum January 17 at 6:00 p.m. under the direction of archives manager Ethan Bowers.

Additionally, January 28 the museum holds “Racing and Engineering for Teens” from noon to 4 p.m. The class will work with the Sacramento State Hornet Racing Team and one of its cars to teach students about engineering and designing a car from scratch. The cost for this class is $30 per student.

The NCM Motorsports Park in Bowling Green, Kentucky, has announced its 2017 schedule with events April 27-28, June 26-27, and August 26-27. Participants will be a part of a four-group program based on skill level separated into novice drivers, intermediate, advanced, and instructors. Registration is open and can be done online.

The National Corvette Museum holds a Kids camp day January 16 from 8 a.m. to 4 p.m. The program is designed to teach children to connect the dots using science to help solve a crime in a hands-on investigation of forensic science. The day is designed for ages 7-12.

Registration is open for the Michelin NCM Bash on April 27-29,. Attendees can attend seminars during the event on the seventh-generation navigation system, tires and brakes, hand building the LT4 engine, what’s new at the BG Assembly Plant, Corvette Racing, Transmissions and more.

The Petersen has opened a new restaurant on its first floor. Drago Ristorante features classic Italian meals with a contemporary flair.

The Auburn Cord Duesenberg Museum holds trivia night January 21. The event cost is $25 per person or $200 for a team of up to eight. The winning team will take home $300.