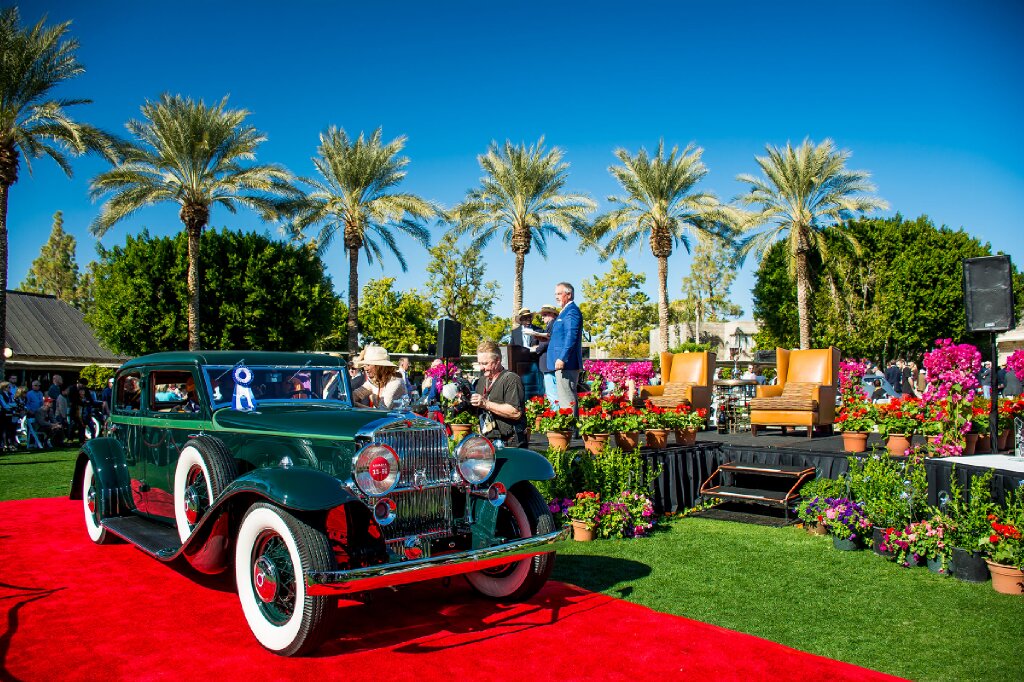 For the third year, ClassicCars.com has selected five exceptional cars from among the entries for the Arizona Concours d’Elegance as candidates for an award to be decided by the website’s social-media audience.

“We are delighted to present the third ClassicCars.com Award as part of the Arizona Concours d’Elegance” said Roger Falcione, president and chief executive of ClassicCars.com. “The award offers a great opportunity for those not at the event to take part and share in the love of these exquisite cars.

“For this award, the collector car community becomes the judge and voting takes place exclusively on the ClassicCars.com social media channels” he added.

The cars were selected by members of the ClassicCars.com editorial and management teams.

In 1953, Ferrari created a line of four-cylinder race cars to sell to privateers. The 500 Mondial, a 2.0-liter car, proved successful for Ferrari in terms of sales and with privateer racers in terms of victories on the race tracks.

This car, chassis 0556MD/0446MD, originally was purchased by Porfirio Rubirosa of the Dominican Republic. He had good success with the car and earned a class win at the Governor’s Cup at Nassau in 1955 and at Sebring four months later.

The fourth and current owner purchased the car in 1961 and raced it through 1967.  It was fully restored in 2008 and won best in class at the Pebble Beach Concours d’Elegance that year as well.

Aston Martin started work on the DB4 in 1956 with a development team that included general manager John Wyer, chassis designer Harold Beach, and engine designer Tadek Marek. Every major component in the DB4 was new, including the body designed by Carrozzeria Touring.

The new design used the “Superleggera” construction method, in which the car’s panels were fixed to a tubular frame built onto a substantial platform chassis.

The DB4 made its debut in 1958 at the London Motor Show with a new 3.7-liter, twin-overhead camshaft, all-alloy six-cylinder engine. The engine made the DB4 the first production car capable of 0-100-0 miles per hour in less than 30-seconds.

This 1934 Hudson Terraplane convertible was found in Albuquerque, New Mexico, by the current owner’s son. The car was complete but in poor condition and received a comprehensive  3 1/2-year restoration with over 3,000 man hours invested.

According to the car owner, the first owner of this Terraplane was Ray Hayne, a well-known drag racer from the Sacramento area. Hayne owned the Terraplane for 62 years before his wife sold the car to Mark Barrow of Albuquerque. The car then sat for 16 years behind Barrow’s warehouse.

In 1936, Bugatti presented the Type 57, also known as the Aérolithe Prototype, at the Paris Motor Show. The prototype featured spectacular lines and riveted seams because it was constructed from a magnesium alloy called Elektron that could not be welded.

From the prototype came three Type57SC Atlantic production cars that were formed from aluminum and carried over the rivets as a design element.

This car is the first of the three Atlantics and went to Lord Victor Rothschild, who enjoyed it for five years before blowing up the engine. By 1945 Chassis 57374 was in America and had been supercharged. Peter Williamson had a restoration performed and showed the car at the 2003 Pebble Beach concours where it earned best in show honors.

Iris Berry, the first owner of this 1953 Cadillac convertible, won the car in an Ocean Spray Cranberry giveaway in Hyannis, Massachusetts. Cadillac painted the car in the cranberry color, a special order just for the contest.

The car has had a frame-up restoration in the original shade and has been affectionately named Miss Vivien as a tribute to a character in the movie, Pretty Woman.

The car was first in class at the Cadillac National Meet in Denver.