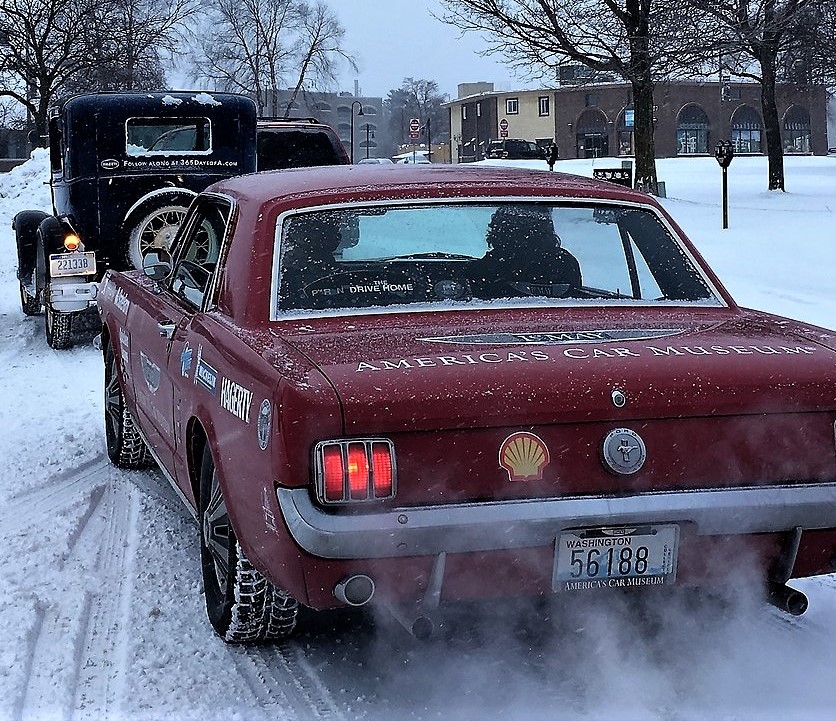 Three classic cars – a 1957 Chevy Nomad, a 1961 Chrysler 300G and a 1966 Ford Mustang – began the trip from Boston on December 28. Trailered behind the support vehicle was a fourth car, a 1917 Crane-Simplex Model 5, formerly the property of J.D. Rockefeller.

The itinerary took the cars south from Boston to Jamestown, Rhode Island, where the big Chrysler’s front brakes started to howl. Suspecting the rear brakes were out of adjustment causing the front shoes to overheat, the team enlisted help from a local enthusiast and his garage lift to pull the drums and check out the system. Sufficiently adjusted, they pressed on to a late-night arrival in New York City.

After an early morning television promo, all three cars toured Manhattan for photo ops, when the Mustang inexplicably purged all of its transmission fluid near Times Square. One hundred miles away in Pennsylvania, the support truck had its second flat tire of the short expedition. The Nomad and Chrysler retreated from The Big Apple, only to be temporarily sidelined with low oil on the New Jersey turnpike.

After a quick call to Hagerty Road Side Assistance, the Mustang was flat-bedded to the Nicola Bulgari Center for American Automotive Heritage in Allentown, Pennsylvania, where collection manager Keith Flickinger and his team refilled and tested the transmission, but curiously could not find the leak.

The tour continued south without the Mustang to Washington, D.C. to attend Katie’s Cars and Coffee in Great Falls, Virginia, one of the largest weekly enthusiast gatherings in the Mid-Atlantic. Turning north, the tour greeted enthusiasts in Lancaster, Pennsylvania, before being reunited with the pony car in Allentown. That was followed by more meet-and-greets in Harrisburg and Pittsburgh, with a special stop at the Carlisle Events complex, home to many enthusiast “Nationals” car shows.

A broken rear axle sidelined the Chrysler on the highway

But the Road Gods would not be denied their offerings, and just past Indianapolis, the Chrysler snapped a right rear axle while at highway speed, stopping the Letter Car between an on-ramp and through traffic. By now, the crew’s cell phone was a familiar number to the Hagerty Call Center, and another flatbed was dispatched and the 300 sent directly to Detroit for hurried repairs before the arrival parade to Cobo Center.

Not the narrative the Drive Home team had prepared for. Expected New England snow never arrived, making for clear roads but unanticipated mechanical difficulties. The challenges forged the team of six crewmembers into a unit over the 12-day expedition.

“When we had a major issue with the Chrysler, everyone did their part without hesitation,” said America’s Car Museum collections technician Dale Wickell. “Within about 30 minutes, we had towing coverage confirmed, the repair shop set up, and parts on the way.”

The teamwork extended to those enthusiasts, suppliers and service facilities that were committed to helping the Drive Home succeed. Chrysler 300 Club members Noel Hastalis and Don Verity scrambled to source brake shoes for the 300, finding a local source at Ray’s Antiques and Parts in Little Compton, Rhode Island, within an hour of the distress call.

Hagerty Insurance, a sponsor of the event, took special pride in dispatching tow service and sending the drivers off with thoughtful gift bags after a visit in Traverse City, Michigan. Jeff Carter, a 300 parts specialist, overnighted a used rear axle to Lincoln of Troy, who had the car fixed and driving better than ever upon the team’s arrival in Detroit.

“It’s easy to get along and have a great time when everything is going well,” Wickell noted. “You find out how great your group is when there are issues. We had a great team.”

The cars made it safely to Detroit, where they will be on display at the entrance to the main hall for the North American International Auto Show, January 8- 22 at Cobo Center in downtown Detroit.

The Drive Home III is set to once again brave the winter roads next January, with a new starting point and three different classic cars chosen from the America’s Car Museum collection.