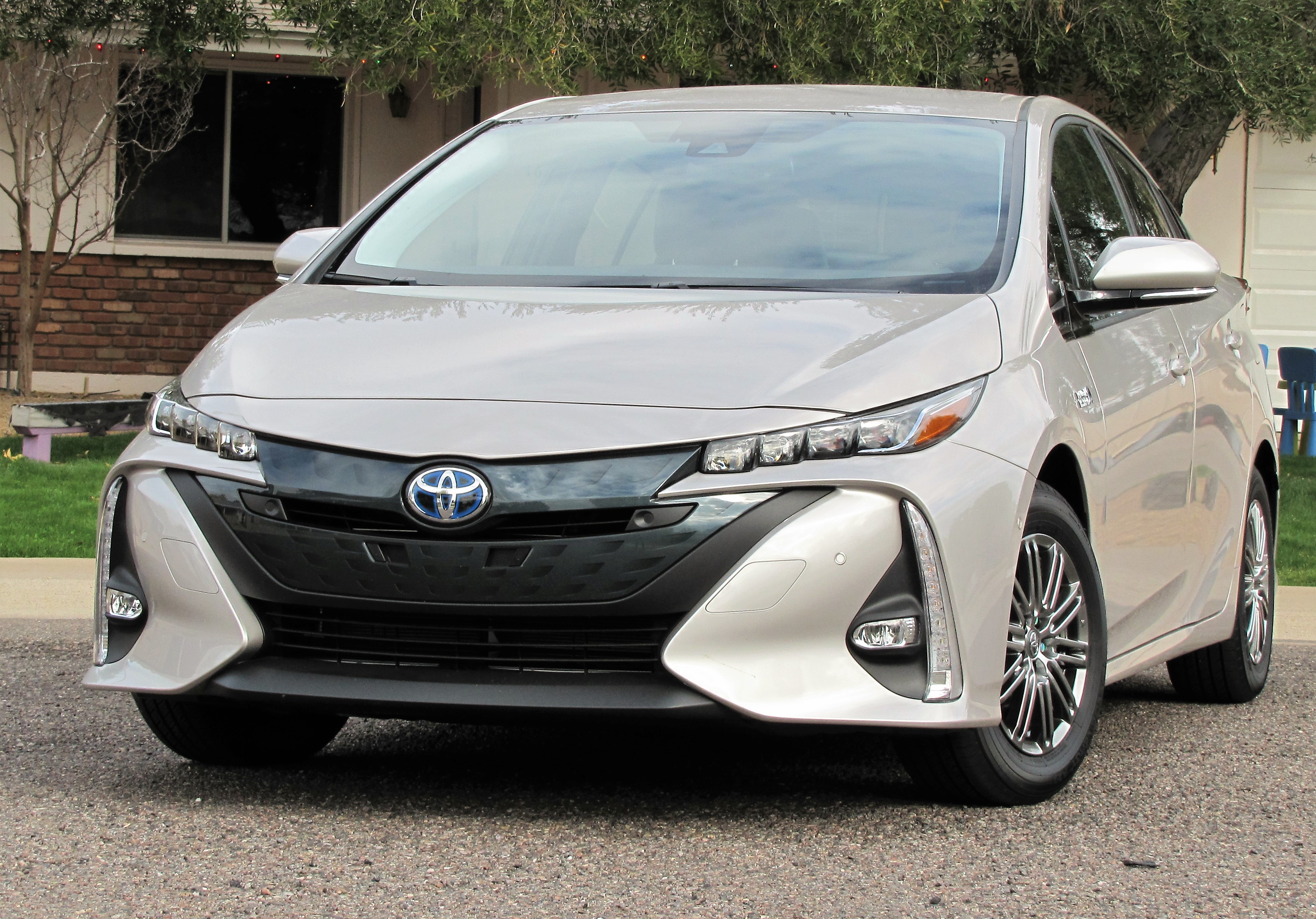 Toyota pulled out all the stops in styling the all-new Prius Prime, creating something that seems like a cross between a space probe and a Lamborghini. That’s a good thing, raising its hipness quotient considerably and making the plug-in hybrid look as high-tech on the outside as it is underneath.

The Prius Prime is new for 2017 and is another effort by Toyota to market a plug-in car with the clean economy of a pure electric vehicle with the practicality of a hybrid. The last go-round for a plug-in Prius resulted in less-than-stellar reviews, most complaining that it seemed like a half-hearted effort that didn’t work all that well.

The new plug-in seems much more whole-hearted, as well as being what Toyota calls “the most technologically advanced, best-equipped Toyota Prius in the model’s nearly two-decade global history.”

Prius has become synonymous with hybrid vehicles, although there are plenty of others, ranging from the expected fuel-sipping compacts to ultra-high-performance Porsches and Ferraris. Prius wasn’t the first gas/electric hybrid car on the modern market – that honor goes to the tiny Honda Insight – but it is by far the most successful.

The main attraction of the Prius Prime: it can be charged up overnight at home, giving you about 25 miles of all-electric driving range before the gas engine kicks in for propulsion or to recharge the lithium-ion battery pack hidden under the rear deck.

While 25 miles of electric-only driving might not sound like such a big deal, for the majority of people, that equates to daily commuting on electric power only, provided you live 12.5 miles or less from work. Or 25 miles if you are able to recharge the batteries while at work. You could commute all week without using a drop of gasoline. The batteries take about 5.5 hours to fully recharge with 110 volts, or about two hours with 240 volts.

There’s no range anxiety here as there would be with a pure electric vehicle, even if you don’t anticipate completing the entire trip on electric power. When the batteries get low, the gas engine starts up automatically, and so seamlessly that you might not even notice it happening. And unlike a pure electric car, you can drive the Prius Prime on a long road trip in hybrid mode without worrying about recharging or running out of juice.

The 600-volt electric motor provides plenty of power for quick acceleration and running at highway speeds. In EV (for electric vehicle) mode, it accelerates, goes up hills and does all the driving on electric power only, with the gas engine never cutting in until you exceed the 25-mile EV range.

You don’t ever have to plug in the car if you don’t feel like it, running it on the gas/electric hybrid function like a regular Prius. But it is satisfying and kind of fun to drive the car electrically. Frugal, too.

After overnight recharges, I was able to accomplish a few mornings’ worth of errands without running out of juice. While judicious driving will allow the car to go further on a charge before the gas engine joins in, it’s not really something you need to worry about unless you’re one of those hyper-miler zealots. Otherwise, the Prius does all the worrying for you, while you drive past the gas station without stopping.

Gas/electric hybrids and all-electric vehicles lost some of their luster as fuel prices have remained low enough to run any old guzzler affordably. Sales might be off for now, but the appeal is still there for those concerned with environmental issues or just cheap transportation. Besides, the days will surely come when fuel returns to its lofty price per gallon.

Naturally, the EPA-estimated gas mileage for the Prius Prime is awesome. In hybrid mode, it is rated at 55 mpg city, 53 highway and 54 combined. In combined plug-in EV/hybrid mode, it gets 133 MPGe (miles per gallon equivalent), as the EPA calls it. Overall, the EPA says the Prius Prime can be driven 640 miles on a tank of gas. Of course, if you stay within the EV range, you essentially drive without using any gas, the only cost being the electrical current needed for the recharge.

The Prius Prime drove very nicely, better than the sodden feel I remember of past Priuses, with more “spark” and greater handling response. The suspension has been improved, Toyota says, and the new engineering is evident.

The body design is sharp-edged and aerodynamic, from the complex contours up front to the “floating” roofline, an optical illusion accomplished with blacked-out glass panels. There are plenty of LED lights all around, making the Prius look as distinctive at night as it is the daytime. The grille has the signature “spindle” shape of Toyota’s upscale Lexus brand.

The one I drove was an upgraded Advanced model, with an interior loaded with techno features and futuristic design elements. Although, I do question why the lower parts of the center console and the steering-wheel hub are finished in cheap-looking shiny-white plastic instead of blending in with the rest of the cabin.

The Advanced model features an absolutely huge 11.6-inch video display screen from which you can perform a host of activities, such as controlling the audio and climate settings or monitoring the complex interplay of the gas engine, electric motor and battery pack. The display screen is not all that easy to master, however, and I was bothered by how many steps it takes to perform some simple tasks. The navigation system also was difficult to use.

The screen is somewhat distracting, such as when you’re trying to change a radio station while in traffic. Its large display dominates the Prius’ cabin like an oversized flat-screen TV dominates the family room at home.

The Prius was luxuriously equipped with convenience and safety features that come standard with the Advanced model, which had a starting price of $33,100. Among them, a great 10-speaker audio system, a full array of active safety features and driving aids, and a pad in the console that will recharge your iPhone wirelessly. There are two lower-end models of Prius Prime starting around $26,000, which seems like a good deal for such an advanced hunk of technology.

Hybrid vehicles might not be so much in vogue just now, but the Prius Prime shows off just how well they can perform, especially with the highly desirable plug-in EV feature. It also shows how satisfying it is to drive without using any gas at all, and without suffering the duress of range anxiety.

I got into this car a few weeks after Bob Golfen. In fact, it was my ride for Arizona Car Week 2017, and the week and the car both were delights. Well, except for when I wanted to change the radio station and wasn’t quite sure where to touch that gigantic TV screen on the dashboard to accomplish that seemingly simple mission.

I also would have liked more traditional (grippier) tires instead of the hyper-mileage rubber when it rained, but I realize the low-rolling resistance tires help hybrids achieve their amazing fuel economy ratings, in the case of the plug-in Prius Prime, the EPA rates the car at 133 mpg overall and at 54 when running solely on its gasoline engine.

Rather than fuss with the big touch screen, I preferred — when I could divert my eyes momentarily from the road — to look at the energy-use graphics on the upper part of the dashboard. It was amazing how often that gasoline engine was silenced and the car ran purely on the energy stored in its batteries.

With my own truck occupying my garage and with an unusually short driveway, I had to park on the street and thus was unable to plug the car in during the week I had its keys. But it almost didn’t seem to matter. The batteries kept charging for the gas engine and regenerative braking technology and, on a typical trip around town, as much as 30 percent of my driving was done on battery power.

In a week that included driving from home to Scottsdale — about a 40-mile each-way trip — on a daily basis, I used less than 3/4 of a tank of gasoline.

Making those drives even more rewarding was the Prius Prime’s roomy interior, generous cupholders, even a rear hatch that could gobble up a bunch of six-to-a-pack, one-gallon-sized water bottles from Costco, and still have room for a big box of Keurig brewing cups as well.

The Prius Plus may not use much gasoline, but this auto writer needed plenty of black liquid to get through car week!