Rick Rawlins: The automobilist as curator 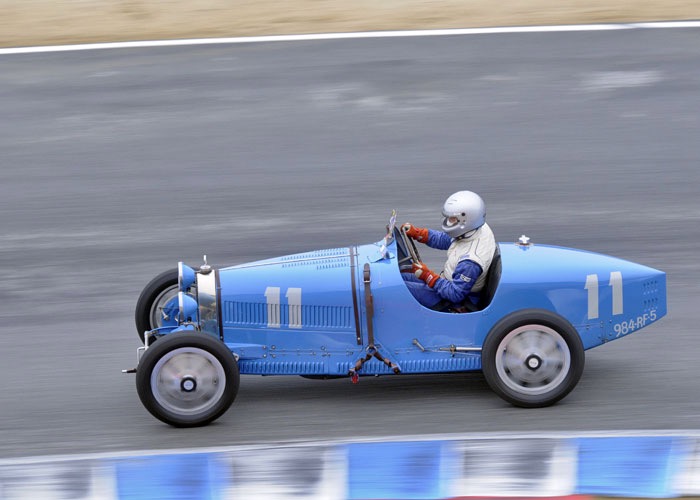 The trove of treasures in Rick Rawlins’ checkerboard jewel box represents the historic touch-points in the century-long narrative of a dream set for a well-read aficionado. In his hands, the race cars are raced and the touring cars are toured and everything is in show car condition.

A 1931 Alfa Romeo 6C 1750 Grand Sport lightly wrapped in Rosso Corsa Zagato coachwork in concours d’elegance condition sets the bar at a near insurmountable altitude as you step through the door and scan its stable-mates.

As if to create a bold-face hyperbole, next in line is a supercharged Bugatti Type 37A grand prix car in Bleu de France that we know is a veteran vintage racer.

Rarer than the Alfa 1750 GS (111 produced) or the Bugatti T37A (300 produced), rarer — and surprisingly faster — is the yellow racer with the extraordinary intake manifold created by Los Angeles tuner Ed Winfield from an assortment of American production parts, assembled in the frame of a Model T Ford.

Rawlins has something more profound than a soft spot for Model T-based race cars and finding Winfield’s flathead hot rod that had beaten the awesome dohc Frontenac was like finding the Hope diamond — in the rough.

In Rawlins’ row of semi-precious iron there is the Packard Gentleman’s Roadster, the Mercer Raceabout,, the mighty Simplex bought new by Hal Roach and restored to the coachbuilt elegance for which he had paid handsomely, and, in the back of this part of the collection, is a pair of unrestored and fabulously storied Rolls-Royce Silver Ghosts, one the Kenilworth sedan was constructed in the Rolls-Royce assembly plant in Springfield, Massachusetts, in 1927 and purchased new by film pioneer John Ford the following year.

Ford bought it for his wife, Mary McBride Smith Ford, in an attempt to quiet her complaints of his many indiscretions. It was delivered with a mink coat in the back seat.

The 1921 Ghost phaeton was sold new in Los Angeles and has spent its entire life in the city.

Just out of sight on the left is a 4.5-liter supercharged Bentley bearing all the visual details of Vanden Plas Le Mans coachwork. On the right, naked of tires, stands one of the exotic double overhead cam Frontenac Ford Model Ts designed and built by the Chevrolet brothers — and that is another story.

LST commander LTJG Rea G. Rawlins was mustered out of the U.S. Navy in 1946. Once home, opportunity for a veteran leader came quickly and he was brought aboard for the management team of R&B Wire, manufacturer of fine quality steel wire logistics equipment. Rawlins moved from general management to owner and set in motion a legacy of three generations of his highly motivated family as backup and leadership began to unfold.

A 1923 Model T Ford restoration was first as a Rawlins family team-building enterprise, it was followed by a 1912 Model T on which the father/son team constructed a recreation of the famous Ford Station Wagon — and it was the tool for young Rick Rawlins to qualify for a driver’s license.

Even more vital to a successful future in the family business was various parts of summers and pieces of weekends spent with the company team, mastering product assembly and the fundamentals of welding as a high school student, resulting in broader responsibilities R&B offered him as a USC graduate, culminating in chief executive by the mid 1980s.

Rick and his ever-courageous (and patient) wife Lucy and next generation entrepreneurial son Grant and adventurous daughters Allison, Sara and Nancy have all participated as team members in these events.

The following is meant to describe what has to be one of the great motoring enthusiast collections in the U.S. While neither large nor sharply focused, it touches every aspect of the automotive century and illustrates boundless tangential fascinations from the perspective of an active man with a depth of knowledge and unfathomable initiative.

To illustrate an inquisitive mind in search of period-correct adventures, Rawlins once owned — and still uses — a 1901 Panhard et Levassor pioneer motor carriage. With it this family of automobilist adventurers are veterans of the famous late-November London to Brighton Run for cars made before 1905 and driven only by the most ardent motorists (experienced and weather resistant — it’s November in England) — read: Rick and Lucy Rawlins.

The North American Vintage Bentley Club New England Meet was an event for the most devoted of its members. It was a drive from the Owls Head Museum on that rocky point of the Maine seaboard, north to the Marshall Point Lighthouse (built in 1831), and then several scenic loops before returning to Owls Head. It was a grey, blustery Maine week and a drive for which the Vintage Bentley aficionados are legend, but few bring their cars from Southern California for a brisk drive on the North Atlantic coast.

According to Rick Rawlins, “It is the ultimate way to see the countryside. We travelled at a pace to see, hear and smell everything.”

And the Rawlins family has a wealth of experience in the attempt to do exactly that.

Rick was asked to exhibit the 1909 Benz Prince Heinrich Trials Special from the Lindley Bothwell collection of brass-era race cars at the Goodwood Festival of Speed. The historic German car wears the livery of its former American owner, Barney Oldfield, who used it at the beginning of his career creating his own legend by challenging all comers to timed laps of American fairgrounds dirt tracks — and there is Rick channeling former owner Barney, chewed-up cigar and all.

The historic 1913 Peugeot L45 (the first double-overhead-cam engine), is another from the Bothwell collection and a veteran of both the 1914 French Grand Prix, and the 1916 Indianapolis 300 (all the Europeans stayed home to fight the war with Germany so the entire Indy program was reduced). Rawlins has exhibited the Bothwell Peugeot in important historic events to illustrate what the first generation of the 21st century’s universal science looked like and sounds like at the beginning of the last.

In the case of the Mille Miglia, Jack Croul, another active collector and friend, invited Rawlins to enter the 4.1-liter V12 Ferrari with Vignale coachwork that was driven to victory in 1951 by Luigi Villoressi — a priceless artifact. Rawlins brought along his trusted co-driver Jim Helfrich to share the historic return to Italy.

A year earlier, Rawlings was entered with Spencer Croul in a 2-liter Series 1 Lancia B20 coupe, a twin to the one driven by Giovanni Bracco to a stunning second-place finish behind the mighty Ferrari in 1951.