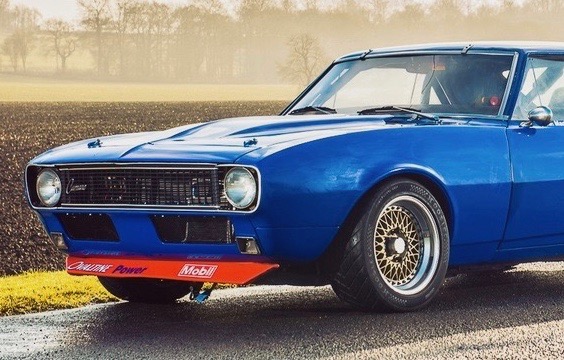 A 1968 Chevrolet Camaro that was part of a race that the BBC rated among the “100 Greatest Sporting Moments” will be on the docket at Silverstone Auctions’ sale February 24. The auction is being held in conjunction with the annual Race Retro International Historic Motorsports Show at Stoneleigh Park just south of Coventry, England.

The car, which won races and posted other podium finishes in British and European events, is best remembered for its part in the historic Iberia Trophy Race at the Crystal Palace circuit, and even heralded by the BBC.

The car was purchased new by Bill Shaw Racing for the 1970 British Saloon Car Championship series. It was driven by Roy Pierpoint, a former British racing champion, and then by Martin Thomas, who bought the car in 1971 and drove it to victory in the International European Meeting at Magny-Cours, the Beech Trophy event at Silverstone, the Miller Craft meeting at Thruxton and also posted many podium finishes.

But the car is best-remembered for the Iberia Trophy Race in South London, where Thomas, Mike Crabtree in a Ford Escort RS1600 and Gerry Marshall in a Vauxhall Viva GT staged a nose-to-tail battle from start to finish. Thomas and his Camaro led nearly every lap until spinning out on the next-to-last circuit, enabling Crabtree to cross the finish first.

“This cracking Camaro has the stance and presence of a serious racing car, and rarely do competition cars with this history and provenance come to market,” Adam Rutter, specialist car at Silverstone Auctions, said in a news release.

Thomas continued to race the car through 1973. In the early 1990s, he rebuilt it and went racing again. He sold the car in 2004 and the consignor continued to race it in vintage events, including the 50th anniversary of the British Touring Car Championship at Silverstone, the Top Gear 50th anniversary of touring cars event and in a special recreation of the 1971 Iberia Trophy Race in 2014.

Car is set up for vintage racing

“This Camaro has a strong following and reputation and is well known on the racing scene,” Rutter said. “I have no doubt that it would be welcomed by organizers anywhere and it is the perfect candidate for blue-riband events like the Gerry Marshall Trophy at the Goodwood Members Meeting, or perhaps the HSCC Historic Touring Car Championship.”