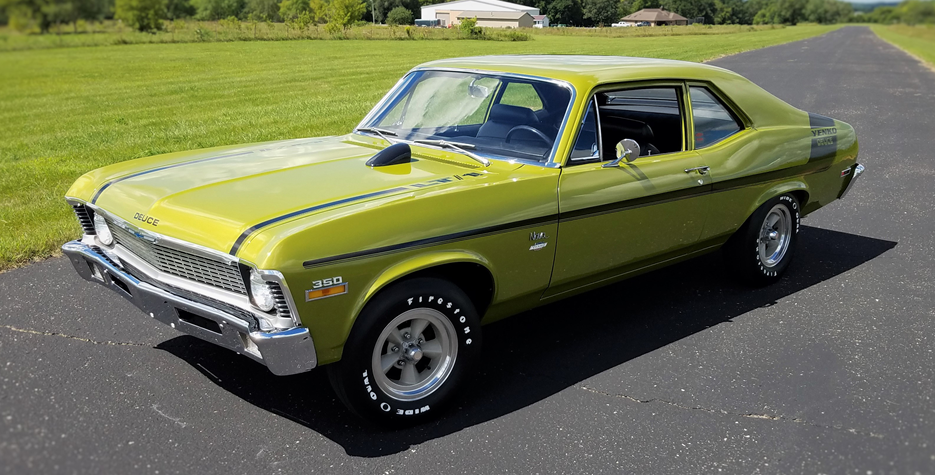 Editor’s note: This is the 22nd in a 30-day sponsored series featuring cars to be sold January 14-22 during Barrett-Jackson’s 46th Scottsdale auction.

Offered at the 46th annual Scottsdale Barrett-Jackson auction, this  Yenko Deuce Nova comes fully documented as car “HYS141” on the Yenko delivery sheets and is one of 175 produced. Other documentation includes listing in the Yenko Deuce Registry and NCRS Data Shipping Report (showing Yenko as the selling dealer).

The car has been treated to a no-expense-spared restoration using many original and NOS parts, completed with rare  Citrus Green paint. The car is powered by a correct-dated and stamped COPO 9010-option 350 LT1 engine rated with 360 horsepower, backed to a dated and stamped Muncie M21 4-speed manual restoration transmission.

Additionally, it’s factory-equipped with the COPO 9737 sport-car conversion package consisting of the heavy-duty F41 suspension and sway bar and 4:10 posi-traction hooked to a 12-bolt rear end.

The laser-straight body with show-quality paint features a fully detailed underside with all-correct inspection markings and decals as well as show-quality chrome and stainless. The fully detailed trunk is equipped with the correct jack and spare XT rim and tire.

It was a past feature car on Yenko.net, a feature car in Muscle Car Review magazine, featured in Super Chevy magazine and also  in the hardcover book Yenko: The Man, the Machines, the Legend by Bob McClurg.

This Yenko has been with its last owner for over 17 years.