Mecum gears up for Florida, its biggest auction of the year 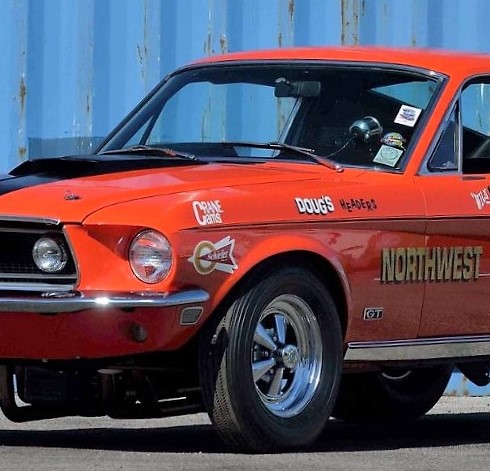 Mecum holds lots of full-scale collector car auctions every year – 14 of them at last count – but the Kissimmee, Florida, sale is by far the biggest. According to the auction company, this year the 10-day auction will have around 3,000 vehicles crossing the block from January 6 through 15 at Osceola Heritage Park.

American muscle cars dominate the offerings, with a strong selection of early models and vintage drag racers among the featured lots.

A year ago, the Kissimmee auction realized $93 million in sales, not including buyer fees, with muscle cars leading the parade. They included a pair of Hemi ‘Cuda convertibles that went for well over $2 million each.

There will be a “huge helping of Hemis” at this year’s auction, Mecum says, as well as more than 150 Corvettes, loads of Mustangs, Shelbys, Camaros, Chevelles, GTOs, 442s, Superbirds, Daytonas and others. They range in values from hobby-variety cars to top-drawer investment pieces.

Cars from famous collections will be auctioned, including those from famed drag racer Don Fezel, the husband-and-wife racing team Gary and Jackie Runyon, plus the collections of Dale Reed, Jonathan Krantz (offered at no reserve) and Tom Lembeck, and from the Wellborn Musclecar Museum Collection.

“Among this year’s lineup are myriad rare and one-of-a-kind cars, from a trio of 1968 Ford Mustang Cobra Jet Lightweights (Lots S119, S120 and S120.1), of which only 51 were ever produced for drag racing, to a 1962 Shelby Cobra, serial No. CSX2032 (Lot F153), once owned by Lance Reventlow of Scarab-racer fame,” according a Mecum news release. “Highlights among the drag cars on offer include the iconic 1963 Chevrolet Impala Z11 (Lot S103) known as Old Reliable IV.”

Other “Main Attraction” cars, as Mecum calls its top selections, include a 1970 Plymouth ‘Cuda convertible powered by a V-Code 440 six-pack, one of just 17 built; a 1967 Chevrolet Corvette 427/435 horsepower convertible, the only known example in black with a blue interior; a 1965 Plymouth Belvedere A/FX altered-wheelbase drag racer known as the Haulin Hemi II; a 1963 Pontiac Catalina “Swiss Cheese” drag racer, one of 14 built; a 1969 Dodge Hemi Daytona, one of two in factory color Spring Green; an unrestored 1969 Chevrolet Yenko Chevelle with just 1,200 original miles; and a 1967 Shelby Mustang GT350 fastback that is No.18, built on the first day of production.

The Corvettes include a 1969 L88 coupe, the last documented example of the high-performance model produced and an NCRS Top Flight Award winner, and a 1963 Z06 that is a Bloomington Gold Benchmark coupe, all-original with 39,000 miles and the actual Corvette that Chevrolet featured in its 2001 promotional material relaunching the Z06 coupe.

The Kissimmee auction is not only about muscle cars and drag racers, though, with plenty of diversity among the 3,000 vehicles, which Mecum says is the largest number of auction cars gathered for one event in the world. These include nearly 100 Porsches, ranging from the original 356 models through a myriad of 911s and competition cars, such as the 1989 Porsche 962 that won the 24 Hours of Daytona and the 1977 Porsche 934.5/935 that came in third overall 12 Hours of Sebring in 1981.

Pre-war classics are well-represented, and include a 1933 Duesenberg Model J convertible coupe with Bohman and Schwartz coachwork, and a 1941 Cadillac Series 61 Sedanette fastback.

There are also any number of street rods, resto-mods and customs available.