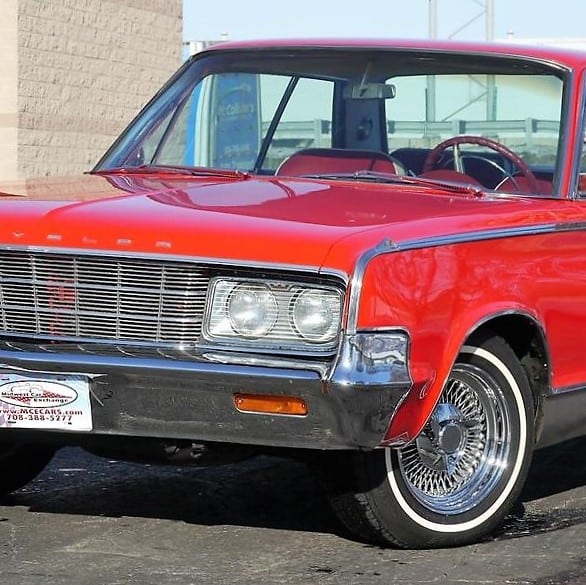 ‘There are many four-door New Yorkers for sale, but how often do you see a two-door come to market?” the ClassicCars.com advertisement for a mid-century-classic Chrysler hardtop asks. Fair enough. These were fairly scarce cars when new, with fewer than 10,000 built, and they rarely are seen among collector cars today.

The Pick of the Day is a 1965 Chrysler New Yorker, a brawny luxury car that takes a sporty turn with its hardtop roofline. Red with a broad, white-vinyl C-pillar, and white piping on the red seats to match, the New Yorker is indeed an unusual piece of Mopar elegance and performance. Most often, these cars are seen in more conservative attire.

Although there is no word about originality or restoration in the description, the Chrysler looks to be an intriguing survivor that has been well-kept and refurbished as needed. This car was from a time when Chrysler was re-establishing itself as a premium brand, with a complete stylistic makeover for 1965 by design chief Elwood Engel, recently hired away from Ford.

“Elwood Engel designed the ’65 New Yorker with styling cues from his 1961 Lincoln Continental – square side view with chrome trim along the top edges of the fenders,” the Alsip, Illinois, seller says in the listing. “The utmost in luxury is included, with a pull-out center drawer in the dash panel that holds twin ashtrays and cigar lighter plus a coin sorter. The glove box hides a tissue dispenser and a sliding map tray.”

Power is provided by a 413 cid wedge big-block V8 with dual exhaust and a three-speed automatic. These cars were known for powerful acceleration and effortless highway cruising in utmost comfort.

This New Yorker is equipped with full power accessories, and the seat upholstery looks good. The steering-wheel rim is adorned with a funky-looking lace-on wrap, and a cheesy, stark-white aftermarket console with cupholders has been added. Both would need to go.

The body seems straight with its flashy red paint job and lavish chrome accents, set off by a sparkling set of chrome wire wheels with whitewall radials. The dealer describes the Chrysler as “a very nice driver” with recent work on its front suspension, brakes and exhaust to make it roadworthy.

The asking price seems cheap enough at $15,900 for this striking and unusual New Yorker hardtop.