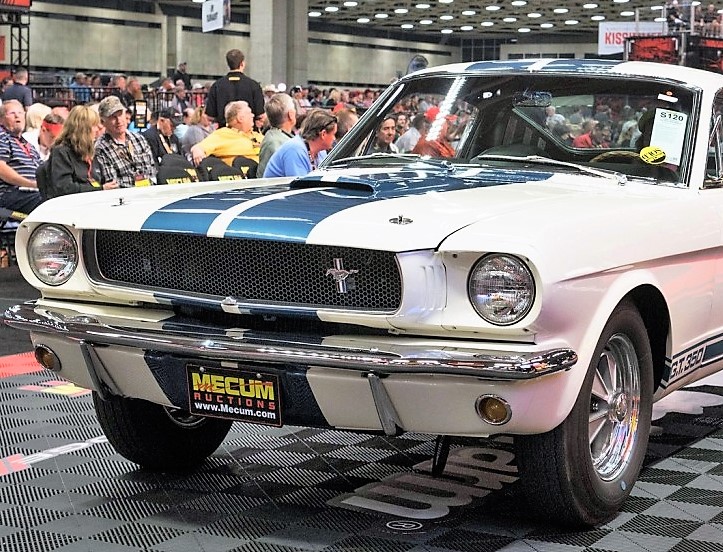 Pontiac GTOs, Hemi ‘Cudas, Olds 442s, Shelbys, big-block Corvettes – American muscle cars were back with a vengeance during 2016. High-horsepower Detroit iron gained in value, not just among the expected Boomer generation but with younger performance enthusiasts who embrace the classic muscle of the 1960s and early ’70s.

The Gen X and Millennium folks also brought something new to the table, an appreciation for later examples of American sports and performance cars, sometimes in reaction to those shown in Hollywood films. And with Chevy, Ford and Dodge turning out modern renditions of classic muscle cars, no longer is the vision of American muscle cars something necessarily from the distant past.

There was a moment at Barrett-Jackson’s Scottsdale auction that seemed to sum it up. That happened when veteran actor Burt Reynolds, the one-time Hollywood heartthrob who starred in Smoky and the Bandit, climbed out of a 1977 Pontiac Firebird Trans Am – black with gold trim, of course – on the auction stage to raucous applause. With a cowboy hat tilted just so on his head, he and the Trans Am looked like they had time traveled from the set of the movie, which turns 40 in 2017.

Few cars are associated with an individual as the Bandit’s Trans Am is with Reynolds (a Ferrari 308 with Tom Selleck comes close). Here was the actor in his twilight years, fading though still able to light up a stage, along with the emblematic muscle car whose star is still rising.

While late-’70s Trans Ams resided in the bargain basement for decades, in recent years the cars with the screaming eagles on their hoods have been sparking interest and decent bids at auction. The Smoky and the Bandit effect is strongly implicated.

By the way, those Trans Ams and the Ferrari 308s were referred to as “moustache muscle” by Hagerty Insurance chief McKeel Hagerty, who referred to the disco decade when so many young adult males sported moustaches (as Reynolds and Selleck still do). Performance cars from that era – American, European and Japanese – were treated with new respect during 2016.

But so it goes with muscle cars across the board, particularly the great ones. The market for them collapsed during the Great Recession that started in 2008, but they have been clawing their way back ever since. Now, it seems, they’re hitting on all eight cylinders, and more of them are coming to auction as their values rise.

Mecum’s numerous auctions had much success this year with muscle cars, the American horsepower icons scoring as highest sellers at many of the company’s sales. During the auction house’s January flagship sale in Kissimmee, Florida, where some 3,000 vehicles were offered over 10 days, classic American muscle dominated the top sales.

So yes, the top-drawer muscle cars are back in vogue.

But so are the less-illustrious models, as shown during 2016 by Mecum, Barrett-Jackson, Russo and Steele, Auctions America and a few other auction companies that cater mainly to the domestic-car crowd. Corvettes of all sorts are up, as are performance Mustangs, Torinos, Chargers, Road Runners, 442s, GTOs, Camaros, the whole run of desirable performance machines from the glory days of American muscle.