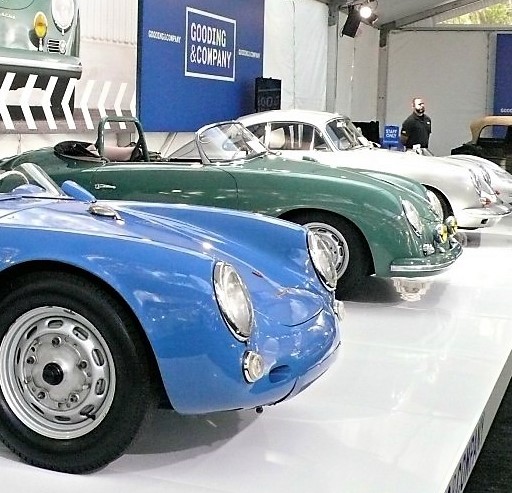 Comedian Jerry Seinfeld is a long-term Porsche addict with an enviable stable acquired with the riches earned from his stage and TV career. Seinfeld was never all-that public about his classic Porsche obsession, but neither was he secretive; even a casual watcher of the Jerry Seinfeld show could identify Porsche posters on the walls of his TV-studio/New York apartment.

For Porsche enthusiasts, Seinfeld’s collection is mythic stuff, the best of the best, ranging from early 356 Speedsters and Carreras and exotic 550 race cars to 917 endurance racers and late-model performance 911s. Some of his cars would appear at the highest-level events, such as the Pebble Beach Concours d’Elegance, though, by and large, he was relatively low key about his Porsche horde.

The vault was opened in January when Gooding & Company announced that Seinfeld would be auctioning off part of his collection at the Amelia Island, Florida, sale held during concours d’elegance week in March. After some initial confusion about how many cars would be departing the Seinfeld garage, the full list was revealed: 16 highly desirable Porsches and two Volkswagens – a Beetle and a camper bus.

Seinfeld sounded philosophical about the shrinkage of the collection.

“I’ve never bought a car as an investment,” Seinfeld said at the time. “I don’t really even think of myself as a collector. I just love cars. And I still love these cars. But it’s time to send some of them back into the world, for someone else to enjoy, as I have.”

The speculation mill was running rampant prior to the Amelia sale. Would the Seinfeld connection boost the cars’ values into the stratosphere? With the softening of the overall market, would a load of Porsches hitting all at once dampen their values? Or would this terrific group of impeccable cars simply sell for the strong money they deserved?

Part of the thinking was that whatever results Seinfeld received from the cars was fairly irrelevant since he is a multi-millionaire many times over.

The Gooding auction tent at Amelia Island was packed with bidders and onlookers when the Seinfeld cars came up. The famed comedian appeared on stage with David Gooding before the sale, not to yuck it up but to express his appreciation for all the interest in his cars.

And the sale boomed. It was evident right from the start that there was plenty of money in the room and that the cars would be going for top dollar. The numbers were mostly strong but nothing outlandish, unless you count the over-the-top $121,000 result for the VW bug. Just one of the 18 cars failed to sell, the 2000 Porsche Carrera GT Prototype which reached $1 million on the block, $500,000 below the low estimate.

All told, the Seinfeld collection brought about $22 million, including auction fees, for the 17 cars sold. The top seller by far was the rare Wendler-bodied 1955 Porsche 550 Spyder that went for $5.335 million, followed by six other seven-figure cars.

The overriding conclusion was that Seinfeld’s Porsches auctioned at decent prices that reflected their intrinsic value rather than the celebrity connection. And once again, Seinfeld proved to be Master of his Domain.