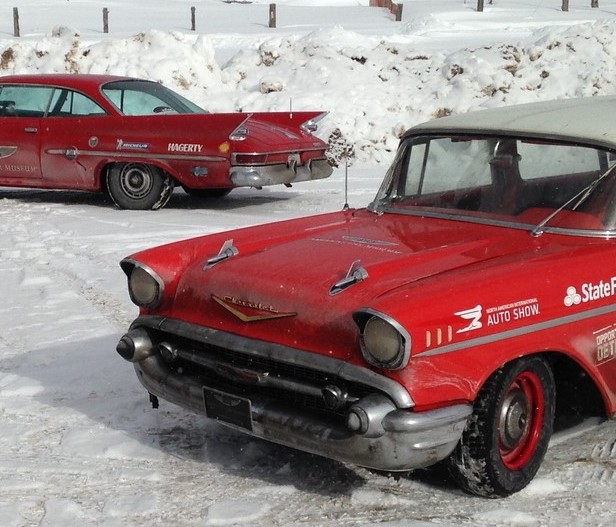 When the LeMay-America’s Car Museum in Tacoma, Washington, announced last December that it would be driving three classic American cars – a 1961 Chrysler 300G, a 1966 Mustang 289 Coupe, and a 1957 Chevy Nomad – 3,000 miles through winter weather to the North American International Auto Show in Detroit, public reaction was fairly predictable.

Critics decried the perceived abuse of such fine vintage vehicles, and dismissed The Drive Home as a publicity stunt. Guilty: as a non-profit that relies on donations from private and corporate sponsors, this museum and others like it are always looking for ways to generate attention, goodwill and operating endowments to stay alive.

Still others thought, “What’s the big deal?” Didn’t we all rely on our now-classics at one time for year-round, daily transportation? Isn’t that how a family of four (or more) took their vacations to such far-flung destinations as Cypress Gardens and Disneyland? Was it really so strange that these machines, made for traversing American highways in speed and comfort, could actually be used again for their intended purpose?

The vintage cars received a thorough checkup before heading out

And a silent group (which turned out to be a majority) reserved judgment, came along for the ride through various media, and escaped their daily office-cubicle reality as they basked in dubious memories of frosted windows, ice-cold 40-weight oil, and the call of the open road.

In full disclosure, I was asked by the museum to pilot one of the cars, and I was grateful for the experience.

In my opinion, the reason that this event became one of the 10 Best Classic Car Stories of 2016 is that, just like our classics, it reminds us of a fading chapter in the Great American Story. With autonomous vehicles on the horizon, nearly gone are the days of driving for driving’s sake. Homogenous interstate landscapes and cheap airfares make transcontinental drives such as this unappealing and uneconomical.

The environment that the three classics faced was harsh. And I’m not speaking of the weather or road conditions, in which they performed quite admirably. No, it seems our fellow motorists have already tuned out of the driving experience, more concerned with their phones or onboard entertainment systems than the actual act of driving.

The view from the open road

At best, the three bright red cars were treated as a mild novelty. At worst, they faced disdain for their observance of safe following distance, speed limits and traction limitations. The Drive Home was more than a promotional trip; it struck a claim for a peaceful coexistence with classic cars on the road.

It has also redefined the way we will look at car museums. There has always been an irony in the static display of transportation machines which exist in kinetic form. Across the country, as display halls shutter their doors and institutions experience organizational upheaval, what is the best way to honor the heritage of the American automobile experience? In glass cases and dioramas, or in their use and interaction with the real world?

You’ll forgive me for waxing philosophical. Long hours spent behind the steering wheel, listening to only the thrum of an engine and viewing wide-open vistas promotes such deep thinking. Come to think of it…maybe we could all use a nice, long Drive Home.