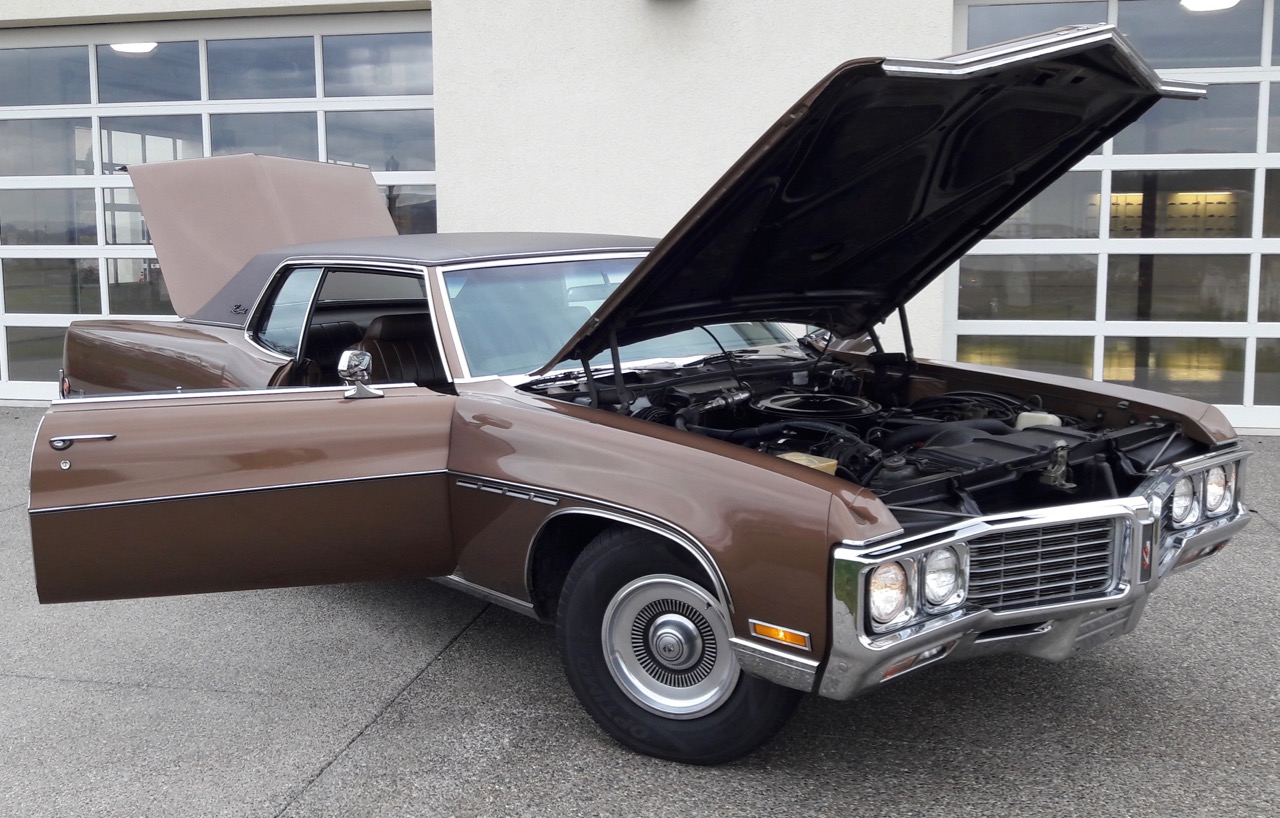 So why are we so smitten with this big brown Buick? It’s definitely no Road Runner when it comes to visual impact – sorry, there is no SubLime green or Go ManGo paint job to be found here.

And even Buick’s own 1960s-era GNX muscle car, not to mention the Grand National from the 1980s, would run smoky burn-out circles around this Electra. Except that’s part of the point of this car, and one of the main reasons we love it. It’s a muscle machine in stealth mode, the kind of classic you could drive all the time and never worry it’s too precious for anything but sunny skies and 72-degree temperatures.

As part of the NB Center collection in Allentown, Pennsylvania, this Buick stands in good company. The Center’s owner and namesake, Nicola Bulgari, is himself an avowed fanatic of the Buick brand. Of the hundreds of vehicles in the collection, many are run-of-the-mill automobiles that were the typical everyday man’s car of their respective era.

That holds true with this Electra, a true “survivor”car that hails from Southern California and shows less than 23,000 miles on the odometer. That’s correct, for 46 years, this brown beast has only traveled about 500 miles annually. The original paint and interior are all original, as they left the factory. This example has been a part of the Bulgari collection since 2014.

Stretching about 225 inches long, this Buick coupe is roughly the same length as a 2016 Chevrolet Suburban full-size SUV. You might expect the Electra to handle like the proverbial Yank Tank, bobbing and bouncing its way down the road, with a pillow-like ride guaranteed to lull you to sleep – or cause seasickness.

It’s intimidating, until you drive it. For starters, the cabin is a riot of brown-on-brown; from the seats to the dashboard, and the doors to the floors, there is one (and only one) predominate color in this car. Hint: It’s brown.

However, getting comfortable is as simple as stretching out on the expansive front bench seat. The thin plastic rim of the steering wheel and column-shift automatic transmission lever are right where you want them. And compared to the claustrophobic cabins of so many modern cars – with their narrow greenhouses and tall center consoles – it’s amazing how light and airy this cabin feels.

The rectangular-shaped speedometer stretches to 120 miles per hour and, based on the rumble from the 455-cubic inch V8 under the helipad-sized hood, you’d sweat this car is good for it. Nice and classy touches include cursive script font on the dashboard, denoting the climate control levers on the lower left-hand side of the dash, or the gentle reminder to “Fasten Seat Belts,” placed just above where the steering column meets the dash.

Punch the gas pedal and you had better have those belts fastened! This Buck moves, quickly! The 370-horsepower on tap manages to get the Electra off the line sharply, but the real fun begins when there are some curves in the road.

Plowing into corners, the Electra leans hard, then settles and digs in as much as possible. Yes, we got the rear tires to emit a nice and steady squeal on a couple of occasions, while flinging the car around the NB Center’s private test track. In fact, we started to imagine Gene Hackman or Steve McQueen was hot on our heels, gunning it hard on the mean streets of Brooklyn or the launch-pad roads of San Francisco. Yes, we know, those were Pontiacs, Mustangs, and Dodges… but you get the point.

Considering this car’s pristine condition, we decided not to drive it like we stole it. Original options include power windows, AM/FM radio, tilt steering wheel, remote mirrors, a vinyl roof, and factory air conditioning.

The original spare tire and jack are in the trunk which, when we opened it, looks like something you’ve seen countless times in Martin Scorsese mob films.

“How many people do you think fit in it?” asked Casey Maxon, historian at the Historic Vehicle Association which is headquartered adjacent to the NB Center. Never ones to be bashful, we handed him our camera and jumped aboard the trunk.

Apart from the thin carpet that covers the cargo area, the space itself was very roomy – though we’re guessing anyone with this view probably isn’t concerned about comfortable carpeting.