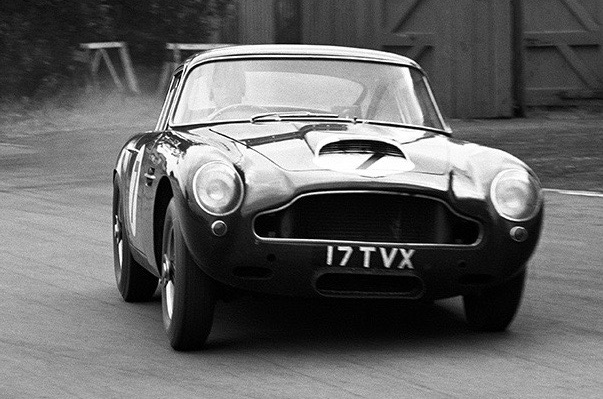 From 1959-1963, Aston Martin produced 75 DB4 GT models that were shorter, lighter, sleeker and more-powerful versions of the standard DB4. Powered by a 3.7-liter straight-six powerplant, eight were special lightweight versions of the car, Britain’s fastest “passenger” sports cars. Stirling Moss drove one to victory at Silverstone in its debut.

Friday, Aston Martin announced that it will produce 25 continuation DB4 GT cars, with delivery starting in the third quarter of 2017. The “track-only” cars will be based on the eight original “lightweight” DB4 GTs.

A DB4-GT in all iets glory

“Built in our recently refurbished, state-of-the-art facilities in Newport Pagnell, the DB4 GT Continuation is hand built in the same location as its illustrious forebears, and marks the return of production to the historic home of Aston Martin for the first time since the last Vanquish S was completed in 2007,” he added.

“Combining the authenticity of a hand-crafted David Brown-era car with sympathetic application of modern engineering advancements and performance enhancements, the DB4 GT Continuation is a fusion of classic design and contemporary methods.

“The result is a truly remarkable machine. One that offers 25 individuals the opportunity of commissioning a classic, built to modern-day standards and ready to be enjoyed in an international track driving program as bespoke and individual as the cars themselves.”

Andy Palmer, Aston Martin president and chief executive, added: “Aston Martin has a rich and vibrant heritage, as you’d expect from a company that has been building some of the world’s finest sports cars for 103 years. Of those the DB4 GT stands proud as one of the most coveted of all.

“It’s a mark of Aston Martin’s breadth of abilities that in the same year we launched the DB11 — our most advanced ‘DB’ production car ever — we can also embark on an adventure such as the DB4 GT Continuation.”

Palmer called the continuation car, “A project that taps into the unique passion and skills that exist within Aston Martin, I’m thrilled we have the imagination and capability to offer 25 enthusiasts the unique opportunity to commission their own piece of Aston Martin history.”

Pricing was not announced, but Aston Martin noted in its news release that surviving DB4 GTs sell for prices that “comfortably exceed £3 million ($3.77 million).”

“Remaining faithful to the design of those original eight factory lightweights, each DB4 GT continuation will be built with Aston Martin Works’ unrivaled experience and exemplary attention,” the company said. “Employing a blend of old-world craftsmanship and modern techniques, continuation cars benefit from improvements in engine performance, handling, braking and safety, with great care taken to ensure these enhancements build upon the original’s exceptional qualities while retaining its feel and character.

“Underlining that authenticity are the continuation car VIN numbers, which carry on from the last original DB4 GT ordered — Chassis 0202R — for an unbroken bloodline and impeccable Newport Pagnell-built pedigree spanning half a century.”

The company said the cars will be powered by a version of the Tadek Marek-designed straight-six engine with two spark plugs per cylinder. The engines will provide 340 horsepower and will be linked to a four-speed manual transmission and limited-slip differential, “just as in the original DB4 GT.”

With its shortened wheelbase, the cars will provide room only for a driver and single passenger. Thin-gauge aluminum bodywork will cover a tubular frame. However, “to improve the accuracy and consistency of the panels, the continuation car’s bodywork uses state-of-the-art digital technology, before being hand-finished in time-honored tradition.”

Because the cars are designed for the track, Aston Martin will launch an international driving program to be staged at several of the world’s leading race tracks. Aston Martin will offer driver training and an arrive-and-drive experience for the car owners.