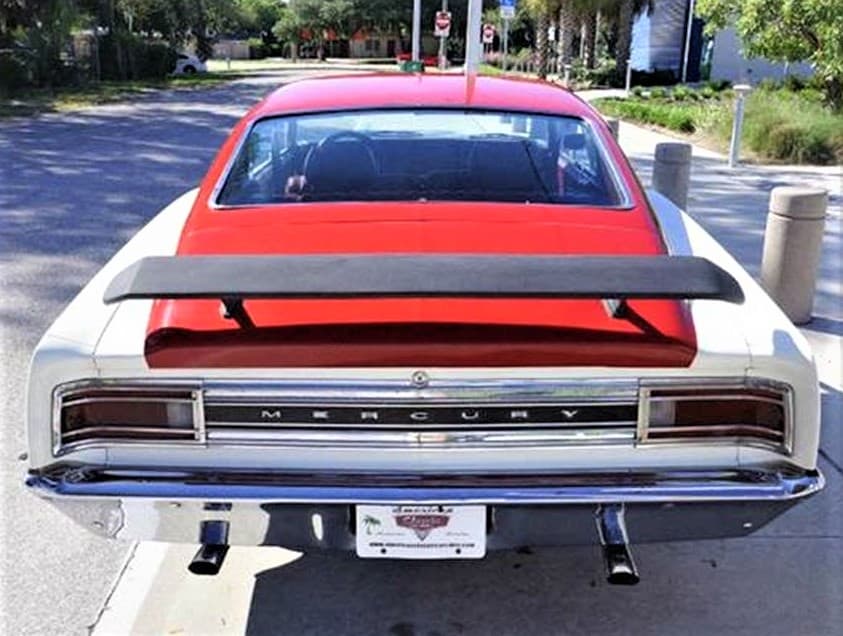 Continuing my NASCAR theme from last week, the Pick of the Day is a NASCAR homologation car, a 1969 Mercury Cyclone Spoiler in Cale Yarborough colors.

The Cyclone Spoiler and the later long-nosed Spoiler II were cars that Ford Motor Company built in order to go racing. They were special-bodied cars with few options from the aero era of NASCAR. The Cyclone Spoiler II was constructed to compete with the Dodge Charger Daytona and Plymouth Superbird, cars that were dominant in the series, especially on super speedways such as Daytona and Talladega.

The Spoiler II today is a big-dollar collector car, but happily there were also standard-body Cyclone Spoilers that carried the awesome Cale Yarborough and Dan Gurney paint schemes as they appeared on the rare Spoiler II cars.

According to the Sarasota, Florida, dealer advertising the car on ClassicCars.com, this is a Yarborough color code car. While not one of the 519 Spoiler II cars, it was painted at the factory with the unique two-tone red-and-white paint scheme and striping accents. These Cyclones were introduced before the Spoiler II cars were launched, and to many enthusiasts, they look essentially the same as the Spoiler II cars.

The seller correctly states that this model differs from the Spoiler II cars in that it was a paint scheme offering built without the extended nose and other performance upgrades. These special-edition standard-body Spoilers are rare cars in their own right, the seller adds, and this car is coded as a Cale Yarborough “Color Code Car.”

Yarborough won three consecutive Winston Cup championships, with 80 total wins, and was inducted into the NASCAR Hall Of Fame in 2012. He also has been cited as one of the 50 greatest drivers of all time.

This example is for the most part an original car with only light cosmetic and mechanical repairs/restoration, according to the ad, with striping and decals that are factory-original style.

The seller states that despite being in business since the 1980s, this is the first Cyclone Spoiler the dealership has offered. It is actually only the second one I have ever seen, and the only one I have seen for sale.

The car looks exceptionally clean and original in the many pictures provided, with no evidence of rust; the only non-stock item I could see was an aftermarket shifter.

With Spoiler II cars selling for as much as $80,000 and aero cars from Chrysler selling for double to triple that, this neat piece of NASCAR history represents a terrific value with an asking price of just $17,900.

Cale’s history and paint scheme on a special-edition muscle car make for what I foresee as a great bet for a future collectible that can be bought now for a bargain price.