‘Ultimate sports car list’ to be offered by Gooding in Scottsdale 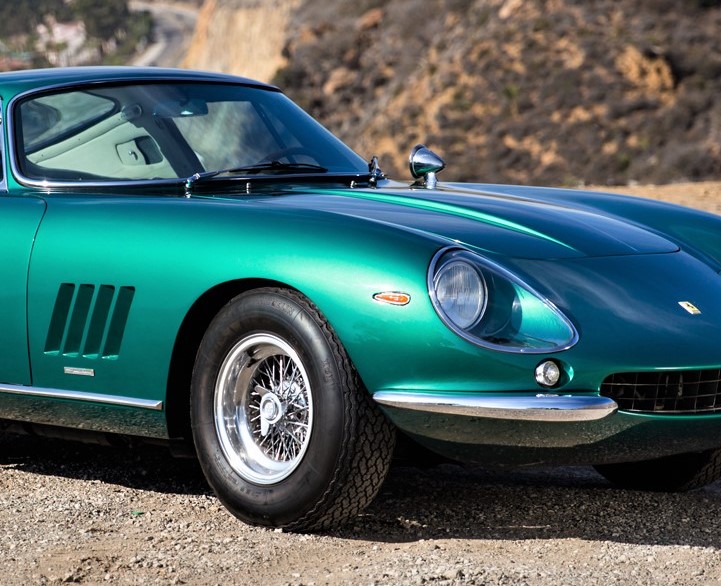 Four cars from Italy, England, Germany and the United States make up what Gooding & Company calls its “ultimate sports car wish list,” to be presented during its January auction in Scottsdale, Arizona.

“Every one of these iconic sports cars delivers a remarkable and exciting driving experience,” David Gooding, president of Gooding & Company, said in a news release. “From the incredible designs to the distinct exhaust notes, there is an aura of something special when you get behind the wheel of each car.”

The Ferrari is the most highly valued, with an estimate of $3 million to $3.4 million. The classic coupe in Pine Green with an orange interior was originally sold by Bill Harrah’s dealership in Reno, Nevada. It has always resided in the United States and has been owned by prominent collectors.

“From the perfectly sculpted coachwork designed by Pininfarina to the race-bred performance of its magnificent four-cam, six-carb, 12-cylinder engine, the Ferrari 275 GTB/4 is a model that perfectly encapsulates the Ferrari mystique,” the news release says.

With a value estimate of $1 million to $1.2 million, the Aston Martin DB5 coupe “is the most revered Aston Martin model, made famous for its elegant styling, world-class performance and starring role in the James Bond film

” the release says. “Fewer than 900 DB5 Coupes were built, and this car is one of just 220 originally supplied as left-hand-drive cars for the export market.”

The Aston is painted in the very-British hues of Dark Green with a black interior, and has belonged to the same Southern California collector for the past three decades.

Mercedes-Benz’s most-iconic model, the 300 SL Gullwing, is valued at $990,000 to $1.1 million. Gooding calls this example in red with a sparkling plaid interior “the quintessential garage find” that was stored in an aircraft hangar by its original owner since 1976, and now has just 31,000 miles.

The Gullwing is being sold by the original owner’s family, the auction house adds, and “presents a fantastic opportunity for a sympathetic preservation or restoration.”

The Shelby 289 Cobra, also valued at $990,000 to $1.1 million, “is a late-model example with the coveted rack-and-pinion steering, and it has been beautifully restored by marque specialist Rare Drive Inc.,” according to the news release.

Chassis number CSX2411, painted in its original colors of Princess Blue with black upholstery, was shown at the 2007 Amelia Island Concours d’Elegance in Florida and has completed four Cobra Tours.

The Gooding Scottsdale auction is scheduled for January 20-21 at the Scottsdale Fashion Square. For more information, visit the auction website.