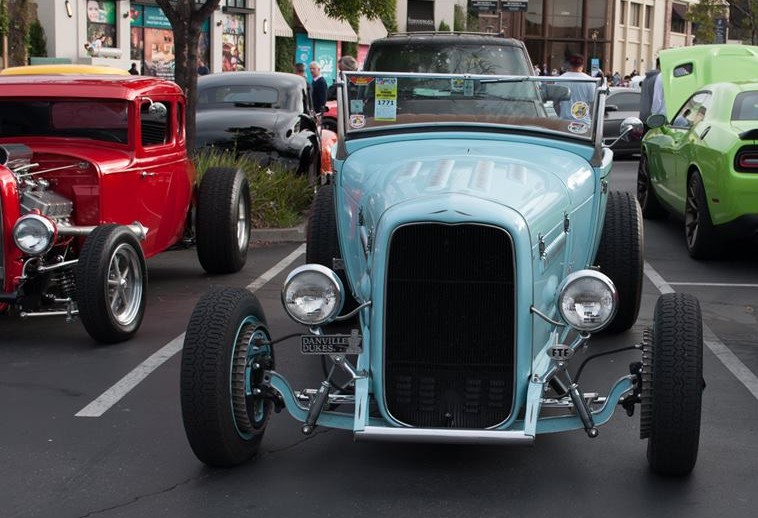 Sunday, Muscle Car City holds a toy drive car show in Punta Gorda, Florida, from 11 a.m. to 2 p.m. Entry to the car show is the donation of an unwrapped toy for a child 2-14 year old. The car show will award 18 trophies and includes a 50/50 raffle, door prizes, and music by Randy.

The Blackhawk Museum in Danville, California, plans Cars and Coffee on Sunday, from 8 a.m. to 10 a.m.

The Indianapolis Motor Speedway Museum has opened a new exhibit in honor of Indiana bicentennial. The exhibit features more than 35 Indiana-built passenger cars including Duesenberg’s, Stutz, Studebaker, in addition to lesser known cars like the 1905 Premier that was owned by one of the speedways founders and a 1911 Cole.

The World of Speed Museum in Wilsonville, Oregon, opens its next exhibit, Women in Racing, on December 10 showcasing the history of women in drag racing and featuring Kacee  Pitts and Sue Mitchell alongside Pro Stock Motorcycle drag racers Angelle Sampey and Peggy Llewellyn. These four racers are highlighted through racing gear, trophies, images, and more.

On December 15, the Petersen Automotive Museum in Los Angeles opens a new exhibit, the Unconventional Canvases of Keith Haring. The exhibit is to show five of the vehicles covered in the artist’s work.

Set for December 9, the North Carolina Museum of Art in Raleigh will host a “hoods up” day in the current exhibit, Rolling Sculpture: Art Deco Cars from the 1930s and ‘40s. Hoods will be up from 10 a.m. to 9 p.m. allowing visitors to see the exposed engines of cars like the 1930 Ruxton Model C Sedan, 1933 Pierce-Arrow Silver Arrow, and a 1938 Talbot-Lago T-150C-SS Teardrop. While the hoods will be up for one day, the exhibit remains on display through January 15, 2017.

Running through December 31, the America on Wheels Museum in Pennsylvania features a holiday train exhibit. The trains within the exhibit run Thursday through Sunday.

The Studebaker National Museum located in South Bend, Indiana, has “original hybrids” on display through June 4, 2017. The exhibit will showcase examples of hybrids — European cars with American powertrains — such as the Iso Grifo, the Sunbeam Tiger, and Donald Healey’s very own Nash-Healey, serial No. 001.

The America on Wheels Museum holds its ninth annual Moonlight Memories Ugly Sweater Gala on December 3, from 6 p.m. to 10 p.m. On December 6 the museum welcomes boy scouts and girl scouts to explore the museum for free.

Sunday, the Owls Head Transportation Museum in Owls Head, Maine offers free admission to everyone. The museum encourages guests to bring or write letters to Santa, who will be making an appearance, and participate in ornament crafting, cookie decorating, and coloring stations.

The autumn series of lectures at the National Motor Museum in England resumes December 3, with the museum’s chief engineer, Doug Hill, discusses “Under the Bonnet Again.”

The Blackhawk Museum speaker series resumes on December 3 with Vic Elford, the legendary endurance race car driver from the 1960’s and 70’s.

From 10 a.m. to noon on December 17, the AACA Museum in Pennsylvania holds a two-hour Build-A-T Workshop for children 8-12 years old. Advance registration is required.

December 10, the National Corvette Museum holds a mechanics class from 10 a.m. to noon covering basic vehicle care and maintenance. Participants will learn how to change a tire, how to check fluid levels and replace taillight bulbs.

The NCM Motorsports Park in Bowling Green, Kentucky has announced the 2017 HPDE schedule with events set for April 27-28, June 26-27, and August 26-27. Participants will be a part of a four group program based on skill level separated into novice drivers, intermediate, advanced, and instructors. Registration is open and can be done online.