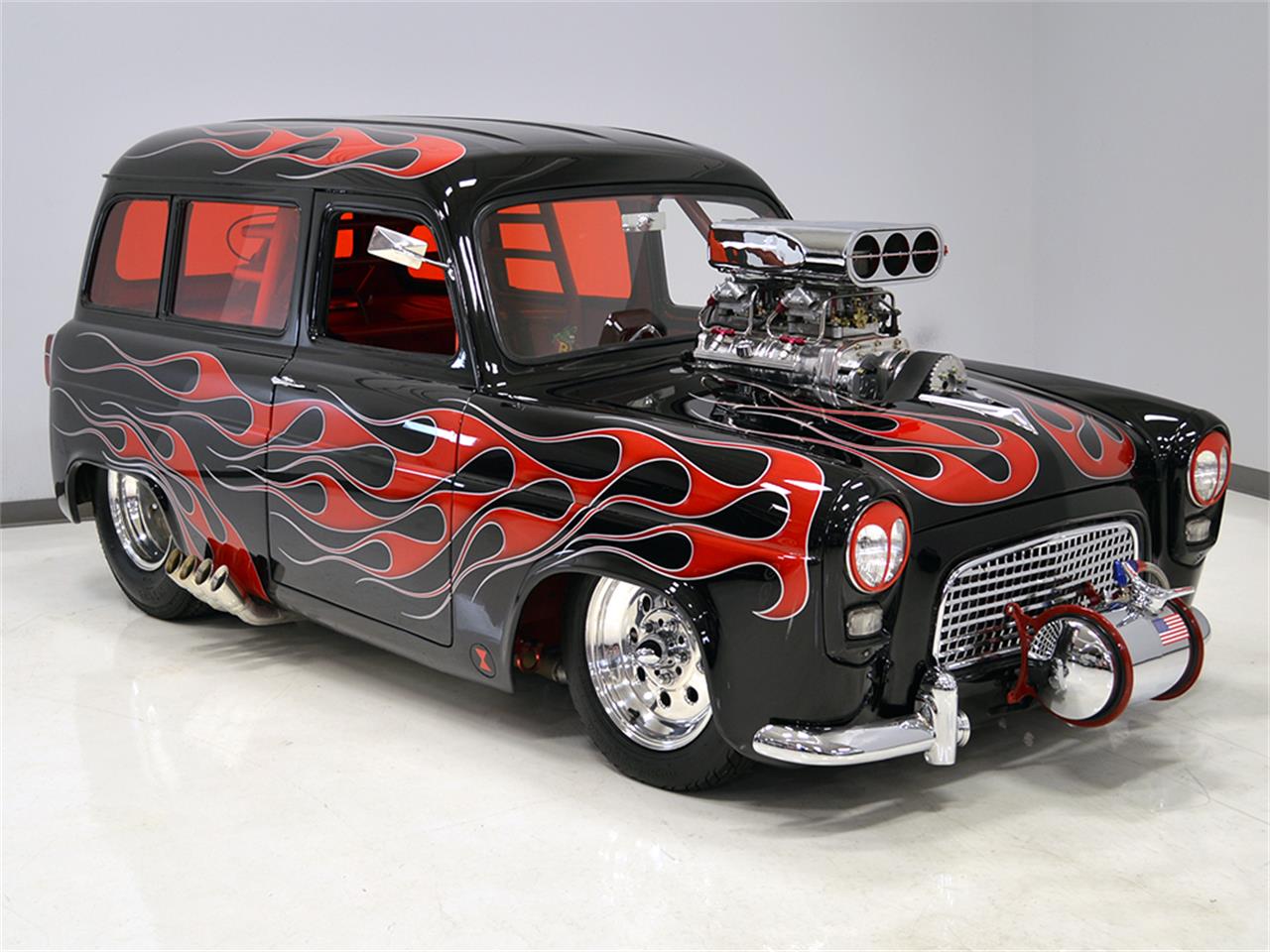 Side exhaust, a wheelie bar, and a shiny engine that sticks out of the hood are just some of the visual elements that allude to the performance of this outrageous Pick of the Day, a 1959 Anglia Street Rod. The custom creation listed by a dealer on ClassicCars.com was featured in an episode of Counting Cars on the History Channel, where it earned the name “Insane Black Widow.”

According to the dealer, the car features a NASCAR-grade tube frame chassis made of 2×3 rectangular tubing and 0.90-wall with 1.75-inch tubing for the roll cage and associated parts because it was fabricated by a member of a NASCAR team.

Side view of the street rod showcasing the custom flames

The car is powered by a 355 cid 4-bolt main Chevy small block bored 010 oversize with a steel crank and Merchant tie rods.  Other components include a custom-grind camshaft and full roller valvetrain in addition to aluminum Dart cylinder heads and a BDS 6-71 Supercharger with a pair of Holley 600 CFM blower carburetors. The engine is rated at 700 horsepower, which could be increased to 1,000 if NOS is used.

The drivetrain is composed of a built TH400 three-speed automatic transmission and a custom Speedway Engineering 9-inch rear end with a nodular housing, 3.89 gears from Tex Racing, a Detroit locker, and Moser double-splined axles for safety. Tubular A-arms and coil-over shocks with spindles from a 1969 Camaro make up the front suspension while disc brakes are used all around behind a set of Weld Racing aluminum wheels with Mickey Thompson tires.

The body atop the chassis is made of original steel that has been worked over to be smooth, flat and as straight as possible so the black paint would not show any body flaws or imperfections. Additionally, the dealer notes “the seams were welded to not only give it a smooth look but to reinforce the tub.”

On the episode of Counting Cars in which the Anglia is featured, Danny Koker and his team at Count’s Kustoms give the car its over-the-top custom look with the show-quality paint job and custom flames across the body, over the roof, and out of the exhaust pipes. The rear of the car features airbrush work depicting a wild black widow theme with a gothic look.

Other elements that build the gothic theme and racecar vibe include aluminum bucket seats with custom red-leather padding, five-point harnesses, and a removable funny-car-style steering wheel. Custom upholstery on the floors and embossed door panels were used to carry the car’s flame into the interior. The dealer comments that the gauges are the original Anglia gauges, though they aren’t hooked up to anything, although the car can be monitored from a set of Auto Meter gauges.

“It always starts, idles, and runs like it should, and it creates a stir even when we pull it out into the parking lot,” said the dealer located in Macedonia, Ohio. Priced at $59,900, Insane Black Widow has been licensed since it was built in 2012 and is street legal.