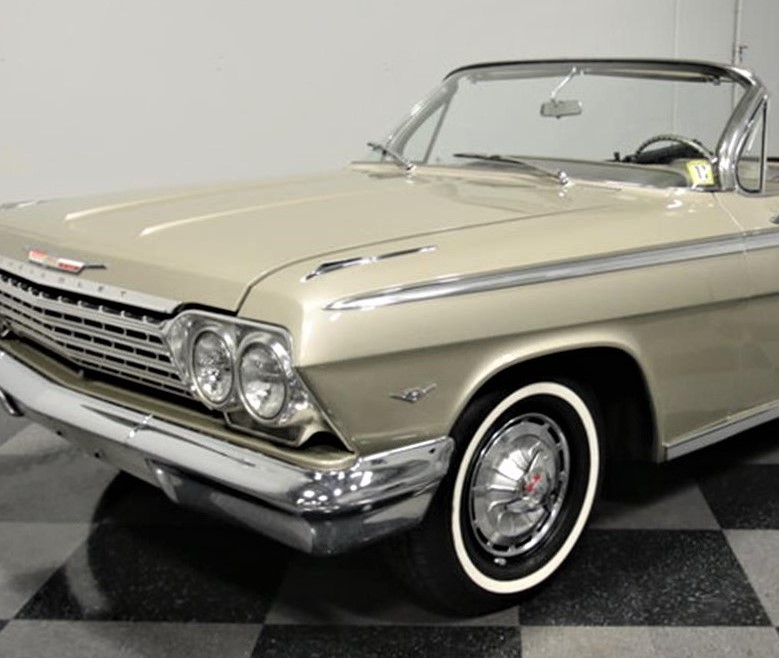 Well, sure, in the northern half of the U.S., the weather has turned winter nasty and the last things on the minds of the inhabitants thereof would be top-down cruising. Interest has turned more toward skiing, snowmobiling and just plain surviving.

Still, it pays to plan ahead, which is why the Pick of the Day is a sweet-looking 1962 Chevrolet Impala convertible in mostly original condition, which would heighten your anticipation of the spring thaw. Park it in the garage and await that glorious day when you can lower the power top and let the sunshine in.

Winter is not a serious issue, though, in Lithia Springs, Georgia, where the dealer advertising the car on ClassicCars.com is located; today the temperature is expected to hit 73 degrees, according to the National Weather Service.

The lovely gold Impala is in stock configuration, powered by the classic 283 cid small-block V8 linked with a two-speed automatic and dual exhaust. The engine compartment looks honest but “grungy,” says the seller, who notes that the Chevy runs like new.

The body and top appear to be in excellent condition, with original wheels and period spinner hubcaps. The odometer shows 77,400 miles.

“The bodywork is straight, including those massive quarters, which show no serious issues or major accident damage, and the doors fit well, always an important factor in a ragtop,” the dealer says. “Body gaps are good, and the crisp details like the character line that swoops down from the headlights to the rear bumper remain sharply defined.

“Of course, any Impala needs that trademark engine-turned trim running along its flanks, and on this one it glitters like freshly machined aluminum, a nice contrast that works extremely well against the gold paint. Great chrome on the bumpers and a nice original grille all reinforce the best aspects of the early Impalas, and no V8 Chevy is complete without some kind of crossed-flag emblem like those on the front fenders of this Imp.”

The interior has been faithfully restored, according to the ad.

“The handsome beige vinyl interior is simply gorgeous, the product of a fresh restoration and very little use since it was completed,” the seller says. “The seats wear factory patterns and those gorgeous button-tufted door panels show lots of sparkling trim and neat red reflectors, ostensibly for safety at night.”

The ’62 Chevys are always a favorite because they remind me of one my dad drove, although his was a base Biscayne sedan. He was a traveling salesman on the East Coast and cars to him were simply a means for getting to his next customer, mostly machine shops for which he supplied precision tools. But my brother and I thought his succession of Chevys was cool, especially the ’62, which was bright white with a red interior.

A gold Impala convertible would have been the dream car for us, just like this one priced at $39,995.