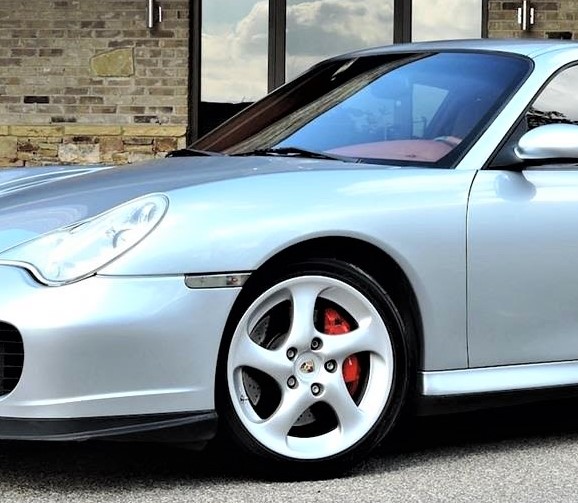 I have been asked quite bit lately is if there are any good Porsche buys left in the collector car market. There are still a few, such as the Pick of the Day, a 2002 Porsche 911 Carrera Turbo coupe advertised on ClassicCars.com for a reasonable $49,900.

According to the dealer in Oakwood, Georgia, the Porsche’s total mileage is just 50,230 miles. The Porsche spent its entire life in the dry Texas climate and its overall condition is excellent, the dealer says.

The coupe boasts 450 horsepower from its turbocharged flat six

The seller calls this 996 Turbo “extremely special,” which is true since the car features the desirable and expensive X50 factory option that increases horsepower to 450 from 415. Later-model X50-equipped turbo cars only have 444 horsepower.  The powerful engine, which makes the 911 Turbo a true supercar, is linked with a six-speed manual transmission.

Another selling point is the original paint color of Polar Silver Metallic, the most desirable for late-model 911 cars. The interior is just as good in rare Boxster Red, and dressed up with the full carbon-fiber package interior, an obscenely expensive option when new.  The carbon-fiber features include center console, dashboard trim strip, three-spoke steering wheel, instrument surround, shifter knob, handbrake lever and door sills.

The car has a clean Carfax and clear title, and it includes all books and manuals, the dealer says.

The interior has the full carbon-fiber treatment

The 996-era 911 Carreras have received bad press over the years due to engine-reliability problems, which include intermediate-shaft-bearings failures and oil-seal issues. But these issues do not apply to the 911 Turbos, which uses a different engine altogether, a handmade unit derived from the famed Metzger found in the GT1 race car. So the turbocharged engine has none of the potential weaknesses found in the naturally aspirated engines.

This model year 911 also has the advantage of being restyled for 2002, making it look less Boxster-like.

Not many 911 Turbos with such options are offered for sale very often, and this low-mileage example offered for less than $50,000 is possibly the best supercar value out there. There’s also an investment possibility since these cars have been climbing in value in recent years and this car, if driven sparingly to maintain its low mileage, could go up.