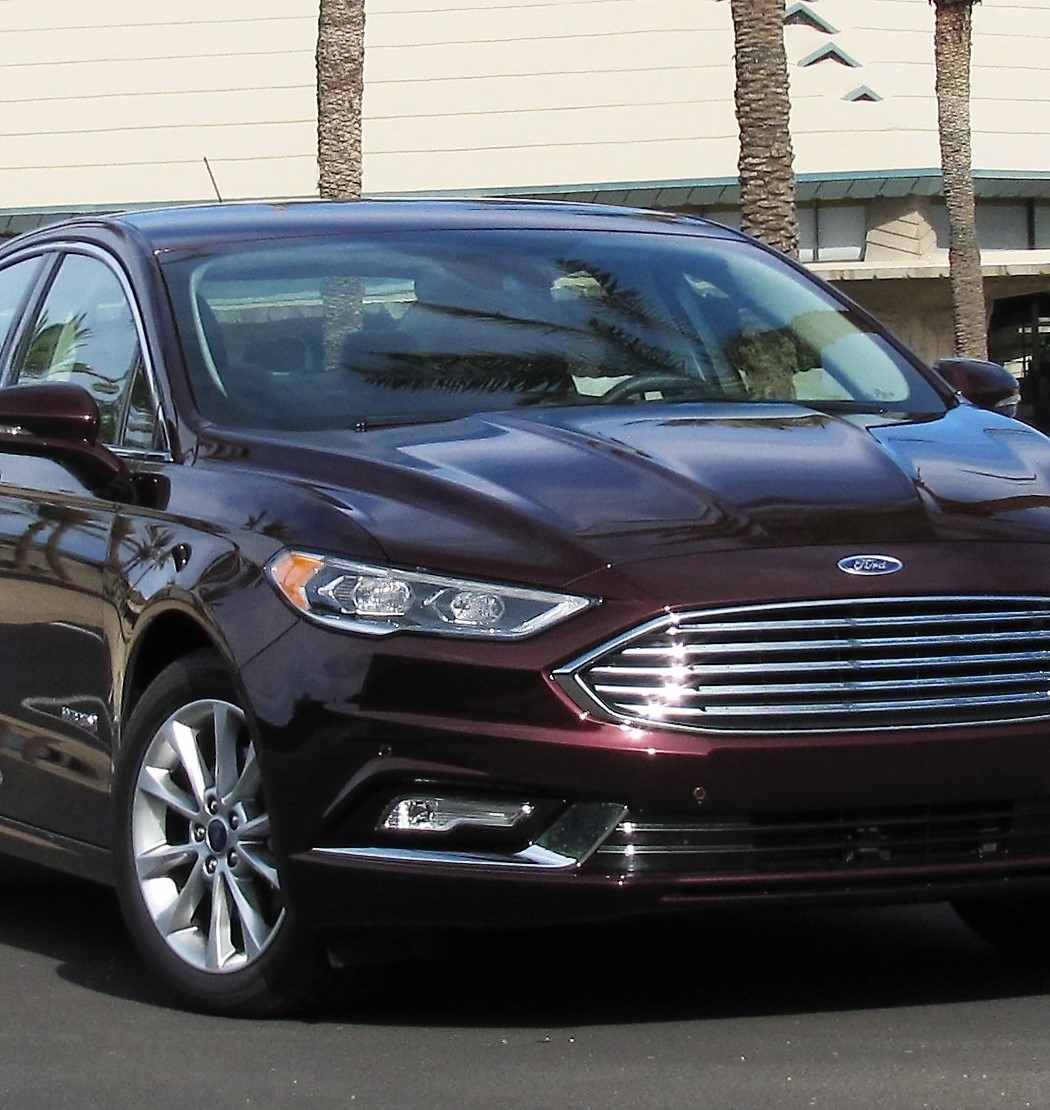 Hybrid cars have a reputation for being boring, more like appliances than automobiles. Their main positive quality is good fuel economy, but rarely do they offer an interesting driving experience.

Really, when was the last time you heard someone say their Prius was fun to drive?

But the Ford Fusion Hybrid goes a long way, both figuratively and literally, in rising above the typical gas/electric hybrid vehicle with a car that is quick and handles well, looks good and, in the case of the options-enhanced SE version that I drove, can be loaded with luxury features. And yes, it gets great gas mileage for a midsize sedan, rated at 43 city, 41 highway and 42 combined.

Fusion has been revamped for 2017, with styling updated in an evolutionary fashion that retains the design that has made this mainstream car so popular, with added refinement and a sleek fastback profile. The brilliant grille that looks like it might have come from an Aston Martin has been widened and sharpened to update the front end.

If you want more luxury, the hybrid can be had in the Titanium or new Platinum trim versions that slather the Fusion with a hedonistic array of technology and comfort features. All Fusion models offer such a range of trim levels, from bare bones to full on, plus a Sport version for gas-only Fusions.

The 2017 Fusion offers two kinds of hybrids. The now-typical gas/electric hybrid setup uses a complex interplay between the engine and the high-torque electric motor to boost mileage and performance. The Fusion Energi is an advanced plug-in hybrid that you recharge from a wall outlet, which allows the car to drive on just electric power for an extended distance, such as a commute to work, before the 2.0-liter gas engine cuts in to recharge the lithium-ion batteries. Ford says it will go 19 miles on just the electric motor.

Both 2017 models have updated software to improve range and power, according to Ford, and the driver can monitor performance and efficiency using a dual-LCD SmartGauge with EcoGuide.

Plunging gas prices have cooled the interest in hybrid vehicles, and in gas mileage in general, with sales of heavy pickups and SUVs topping the charts in recent years. Yet there is something fundamentally satisfying in driving a vehicle that succeeds in getting the most out of a gallon of gas while not compromising on style, comfort or drivability. It was easy to forget that the Fusion was a hybrid instead of a conventional gas-engine car, other than the EcoGuide array.

The Fusion Hybrid’s competition in the midsize sedan range include hybridized versions of Toyota Camry, Hyundai Sonata, Kia Optima, Chevrolet Malibu and Honda Accord. Some of them do better on fuel mileage than the Fusion, but might lack other attributes. Shop and compare.

Ford says that besides the hybrid models, its entire range of Fusions provides the most technologically advanced cars the automaker has ever offered. Most noticeable was the new rotary gear-selector dial that takes the place of a conventional automatic-transmission shifter. The little wheel functions well and with a precision feel. There are a few other brands that use similar gear-selector dials, and expect to see more of them in the future. It’s a good setup.

A new system called Sync3 for voice and touch input for computer functions replaces the unpopular FordTouch system, and it seems to be easier to use. Plus, there are the always-appreciated conventional rotary dials for such things as tuning the audio system and adjusting the dual-zone climate control. Another favorable low-tech feature is Ford’s unique capless fuel filler.

Part of the gas-mileage gain is accomplished with an efficient continuously variable automatic transmission, never ideal for drivability, though in the Fusion Hybrid, not terrible once you get used to it. There’s some of that CVT rubber-band feeling, but the kickdown response was decent for quick acceleration.

The ride is soft but the handling is precise, although the power steering could use a little less boost and more feel. But most likely, the steering is dialed in to where the majority of hybrid sedan drivers would prefer. The sedan felt generally cushy but crisp around town, and very smooth and quiet on the highway. The regenerative braking system that generates additional electricity for the batteries is essentially unnoticeable.

The Fusion has a roomy interior in relation with its overall size, although the sloping roofline could affect headroom for taller back-seat passengers. The hybrid version is essentially the same inside; there is some intrusion into trunk space because of the battery pack, although the trunk is still plenty commodious.

Pricing for the Fusion Hybrid seems reasonable, starting out at just over $25,000 for the base S model. The SE that I drove started at $26,480, with options including a $2,995 luxury package; Driver Assist package including lane-keeping and cross-traffic alerts, $1,575; adaptive cruise control with stop-and-go assist for slow traffic that comes to a complete stop and then go with the flow, $1,190; technology package, $995; active park assist, which now handles head-in parking as well as a parallel, $995; Burgundy Velvet paint (which looks great), $395; and shipping, $875.

There was a discount of $990 for some of the features, bringing the total to $34,510, still a fairly modest price tag for this level of technology, efficiency, styling and luxury. A good family car for those who want to save on day-to-day driving.