At the wheel: Driving in the Grand Prix of Scottsdale 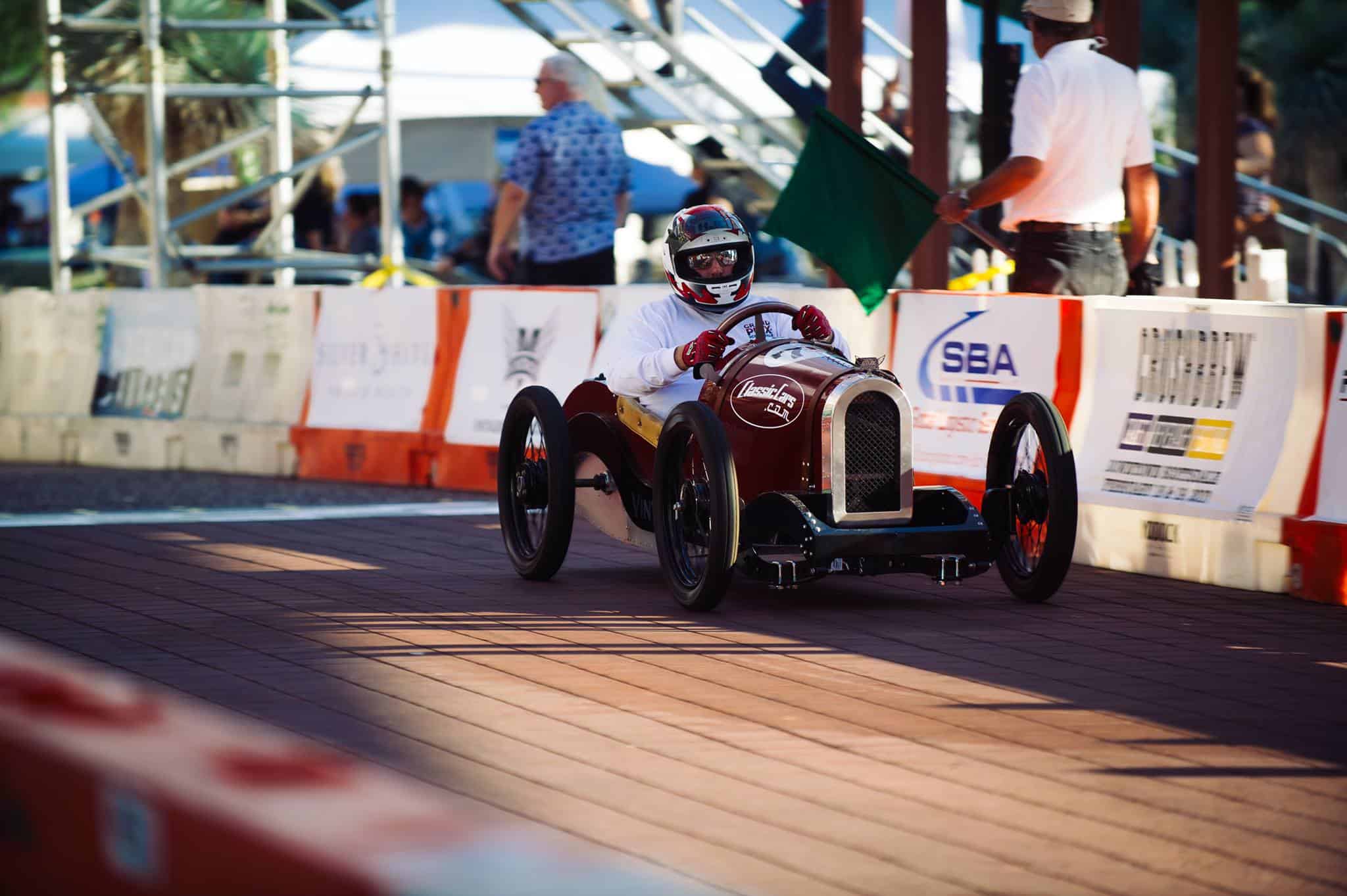 In an interview with Ken Block after the premier of his Gymkhana Seven video, he told me that making the video was surreal because he never thought the streets of Los Angeles, his hometown, would be shut down just for him to drive and showcase his skills for a YouTube video. I remember thinking, that’s how you know you made it — when your hometown shuts down for you to hoon.

While I don’t know if you could even compare it to  hooning, last weekend I drove a little race car on streets that had been shut down in the heart of Scottsdale, Arizona, my hometown.  The event was the  Grand Prix of Scottsdale. The car was a pint-size, open-wheel racer built in vintage style.

I thought I understood Block’s surreal feeling because I feel like I am driving a race car every time I get behind the wheel of Marilyn, my daily driven Mustang.  But this experience was different.

Regardless of how spirited you drive daily,  it really doesn’t come close to the adrenaline rush of racing on public roads knowing you have the freedom to push yourself and to test the cars limits without it being frowned upon or considered illegal –- that’s what makes it surreal.

Despite being a relatively low-powered vehicle with a maximum speed of 25 miles per hour, the 300-pound race car was nimble, though it often felt unsettled and squirrely. The small car also amplified the bumps and grooves in the roadway, which sent me flying out of the seat and sliding the car the corners.

The car’s cornering was decent and I was able to pass others in those sections, but the car was painfully slow when it came to the long stretch of straight road. I would have enjoyed going faster. Much faster.

As safe of an environment as it had been designed to be, racing is racing and the spirit of competition can get the best of us. Drivers of  different skill levels were in the 40-some cars on the track and after a few 45-minute sessions of racing, anything can happen. I drove twice during the Grand Prix and at times it felt more like a demolition derby than a proper race. During the event, I saw a car loose a wheel and spin out, and another driver flip over and become trapped momentarily underneath the car.

The spirit of competition doesn’t always translate into aggressive driving; it also can bring teams together. For me, the nature of my role at Classic Car News frequently takes me out of the office, doesn’t call for much interaction outside of the editorial team, and never really allows me to develop a sense of comradery with my ClassicCars.com co-workers or build close relationship.

But each of us who  participated in this event worked together toward a common goal.

“I really appreciate that our employees were able to bond throughout the experience,” said Roger Falcione, chief executive and owner of ClassicCars.com. “From the good-natured banter leading up to the race to the race itself, it was just a really good experience for the whole company.”

Sarah Moore, from sales operations support, shared that her favorite part of the event was working with Vintage Kart — the force behind the Grand Prix of Scottsdale.

“Jack, Brian, and Andrew all spent a significant amount of time helping me learn to handle the vintage carts and encouraging me,” she said. Moore added that she had been initially nervous about racing, but was excited on race day when she realized how well the Vintage Kart team had prepared her.

“As a whole, the event was a wonderful experience” said ClassicCars.com controller Troy Shumate. “Kudos to the organizers for putting together such an enjoyable event.  I’m looking forward to driving again next year!”

Chris Drew, a customer support specialist, commented that for her, “just being there in all the excitement of the weekend was so fun” and “being a driver was the cherry on top of everything.”