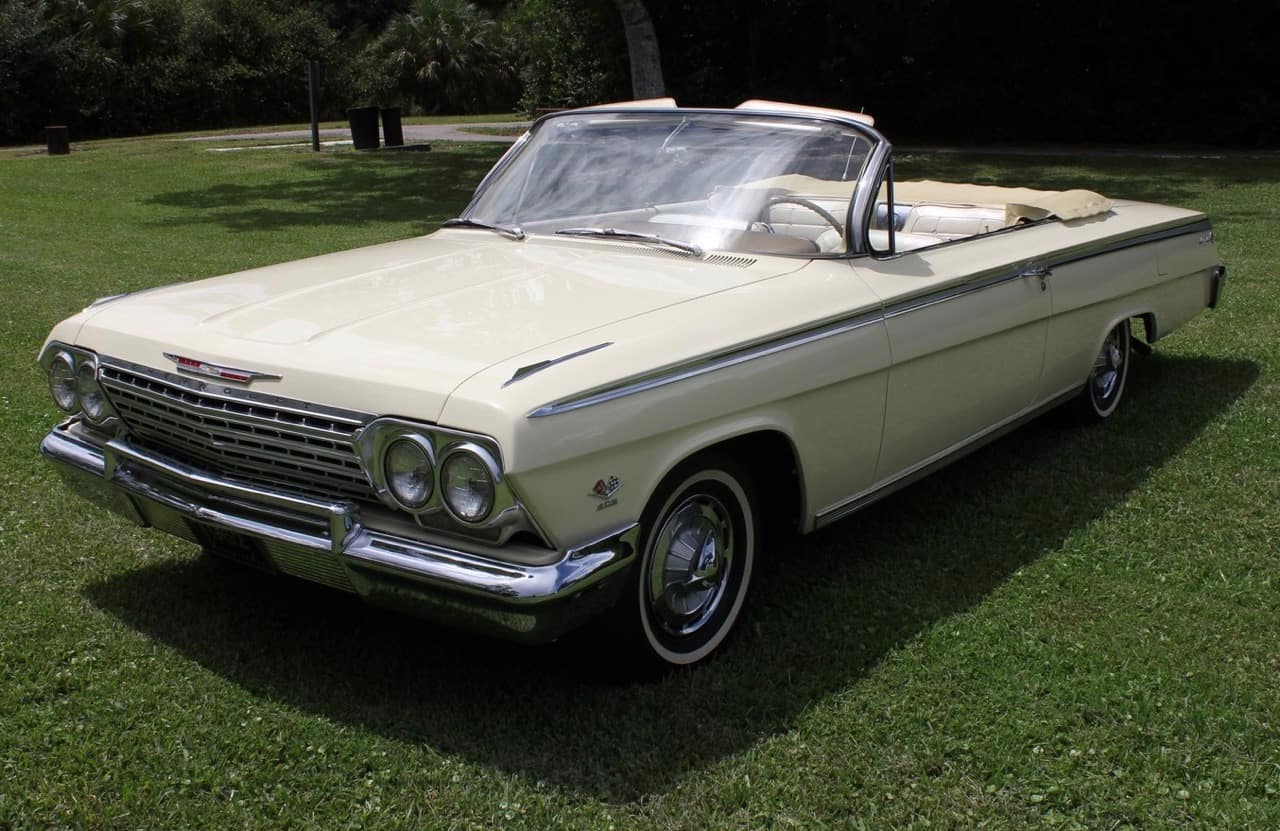 When Don and Jeanette McKinney heard the Beach Boys sing “409” in the spring of 1962, they fell in love with the song… and then the car.

They went into Aloha Chevrolet in Honolulu, Hawaii, and placed their order for a 1962 Chevrolet Impala SS convertible in Coronna Cream with Anniversary Gold interior and a cream convertible top. They ordered their car equipped with power steering, power brakes, the 409cid V8 rated at 409 horsepower, a 4-speed Muncie manual transmission and a 3:23 posi-traction rear end.

The hot 409 engines were in short supply and the McKinney’s didn’t get delivery of their gorgeous Impala SS convertible until early January of 1962.

Don and Jeanette drove their 409 less than 1,000 miles a year. Every year, they took their “baby” into Aloha Chevrolet to have the oil and filter changed and their car state inspected. We know this because we have the original Aloha Chevrolet invoices from each year and the mileage on the odometer, the serial number, the car’s license plate, the date and the McKinneys’ name listed on every invoice and many of the original cancelled checks for the $4.94 for this
service work covered and we have 118 pages of original documentation. (not copies).

In December of 1981, the McKinney’s decided to offer their beloved Impala SS convertible for sale and on December 18th they ran the following ad in the Honolulu newspaper (we have the original ad… and the full page of the newspaper has yellowed from age).

George Cambria, a good pal of racing legend Dale Armstrong, saw the ad and called Dale in Los Angeles. Dale had long been looking without success for an all original, as-new 1962 Impala SS convertible equipped just like this car.

As soon as George described the car, and the $5,000 price, Dale simply replied “Buy it now!”

George took the Chevy to the Honolulu port a few days later and a receipt from Matsun Ocean freight shipping lines dated December 29 reveals that the freight costs were slightly over $600 to ship the car to from Honolulu to the Los Angeles Port. (ironic because this car was produced in the Chevrolet plant in Los Angeles).

In about 10 days, the ship arrived in LA, as evidenced by the shipping paperwork and was signed for by it’s new proud oner, Dale Armstrong.

If you’re not a fan of auto racing and have never heard of racing legend Dale Armstrong… briefly, he was born in Canada and moved to Southern California. His nickname was “Double A Dale” (AA Dragster) and Dale is an inductee of the NHRA hall of fame, the Canadian racing hall of frame and the International racing hall of fame. He set over 50 records and in 1992 he was Kenny Bernstein’s crew chief of the AA Fuel Budweiser dragster when it became the first dragster in the world to top 300 mph in the 1/4 mile.

Over all the many years Dale love, cared for, owned and drove his Chevy, he drove it slightly more than 1,000 miles.

Sadly, Dale passed away in November of 2014. All of Dale’s cars were left to his loving wife Susan in the Dale Armstrong Trust.

We purchased this car with 16,169 miles and have driven it almost 200 more miles since its purchase.

Original down to the 1962 spare tire with its original BF Goodrich sticker still in the trunk, we are convinced this is the lowest documented mileage 1962 Chevrolet Impala SS convertible with its factory original and unmolested 409cid V8, 409hp, 4-speed, posi-traction left in existence.