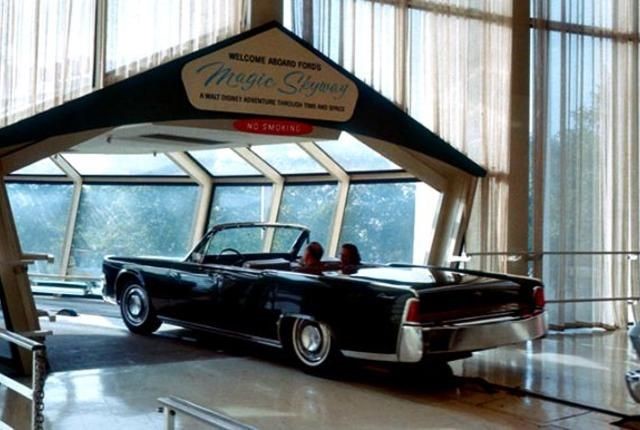 Once upon a time, a 1964 Ford Thunderbird convertible seemingly transported people through “time” at the 1964 World’s Fair held in New York. The car was part of the Magic Skyway within a Ford Rotunda that spanned several city blocks at the fair grounds.

“I found her in a museum in West Virginia” said Mark Jackson, the current owner of the Magic Skyway Thunderbird, which was built for Ford by the Disney Imagineers.

”The owner didn’t want her because he was collecting Corvettes and was going to put her outside since she was just an old ford” Jackson added in a news release from the AACA Museum in Hershey, Pennsylvania, where the car will be on display through April 15, 2017.

Along with Jackson’s Thunderbird, cars used on the Magic Skyway had been delivered to a local Ford dealership where the engines, transmissions and driveshafts were removed and several large holes were added to the underside of the chassis to attach the cars to the skyway via metal plates that were welded onto a chain track guided by wheels spaced every three feet.

The ride allowed fair attendees to sit in the vehicle of their choice and to ride along the Rotunda’s exterior while taking in views of the fair and exhibits.

Upon conclusion of the fair, the cars were sent back to the dealer to have engines and drivetrains reinstalled and then were sold as “used cars.”

The Magic Skyway later became the PeopleMover at Disneyland in California.

Jackson’s offer on the Thunderbird was accepted. He was in the Czech Republic when he wired the payment to the owner, who also was on a business trip, in Singapore.

Jackson got the car in 2013 and named it Margaret because he recieved it the day Margaret Thatcher died. Jackson said he was an admirer of the “Iron Lady” and former British prime minister.

With a Desert Tan exterior and Palomino interior, the Thunderbird is listed in the Thunderbird Registry as a significant Tbird and underwent an extensive restoration to become drivable with its original 390 cid engine.