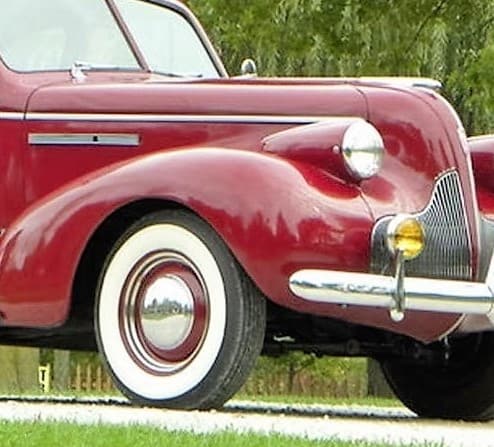 The Buick shows fewer than 55,000 miles on its odometer

Here’s another rare survivor for Pick of the Day, a 1939 Buick 46 S with just 54,616 miles on its odometer. The stylish sport coupe is also an example of the graceful design trend that started toward the end of the 1930s, a brief pinnacle cut short by the advent of war.

The Buick has a sleek look, which was refreshed for 1939, punctuated by those wonderful fender skirts that came as an option from the factory. The dashboard shows the stark modern styling of the era, with a linear arrangement of the gauges.

“A most beautiful original survivor,” the Volo, Illinois, dealer calls it in the Classiccars.com advertisement, that was “kept beautiful and well maintained.”

The Wine Rose paint gleams in the numerous photos with the listing, although the dealer does not indicate whether the car has been repainted.

The engine, an overhead-valve inline-8, has been rebuilt and “the entire car was professionally detailed to perfection,” the dealer says in the ad.

The tan rib-cord upholstery is as it came from the factory, the ad says, and it seems fairly tired in the pictures. The dashboard and “banjo” steering wheel look pretty great, however.

While the car has the style of a two-seater, there are a pair of “opera seats” in back, which fold down from either side, allowing two more small people to come along for the ride.

The Buick is accentuated by dual fog lights and wide whitewalls, as well as those wonderful fender skirts. The car also has one of Buick’s pioneering features: turn signals. It retains its original 6-volt electrical system and is a radio-delete version.

The asking price of $27,900 seems about right for this unusually nice Buick survivor, which the dealer says “is one remarkable show stopper you can drive with confidence.”