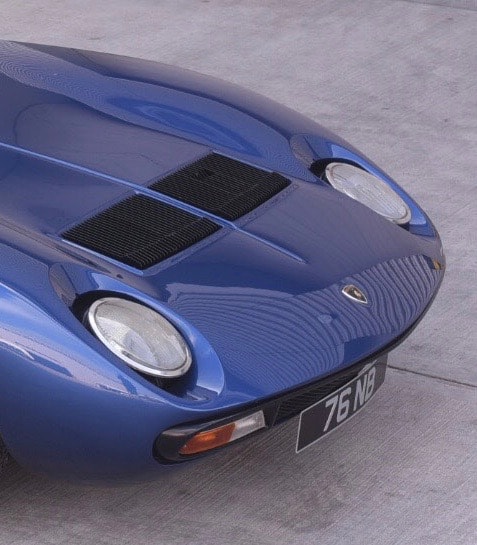 Cars formerly owned by Rod Stewart and U2’s Adam Clayton are among 60 vehicles being offered October 29 at Coys’ inaugural auction at The Classic & Sports Car Show at Alexandra Palace in London.

“The addition of a classic car auction to the second annual Classic & Sports Car Show is an exciting development,” James Elliott, group Editor of classic & Sports Car magazine, said in a news release. “Coys have gathered a wonderfully eclectic selection of classics for the sale and we’ll all be glued to the Panorama Room on the afternoon of Saturday 29th October to see what prices cars such as the ex-Rod Stewart Lamborghini reach.

“It’s fitting that both a Miura and a Jaguar XK120 are among the consignments, given that these great models are among the 10 finalists for our ‘Century of Supercars’ central theme,” he added. “The auction will surely tempt visitors with garage space to fill back home.”

The ’71 Miura was purchased new by Stewart. The ’72 Ghibli, one of only eight built with right-hand drive, was owned by the U2 bassist.

“We are delighted to be hosting the first auction at The Classic & Sports Car Show,” said Chris Routledge, chief executive of Coys. “We’re proud of the variety we will present for sale at Alexandra Palace. It promises to be quite an occasion.”

Also on the docket are a 1953 Jaguar XK120 drophead coupe, right-hand-drive 1974 Ferrari 245 GT E Series with Scaglietti coachwork, a one-owner 1964 Aston Martin DB5, two Ferrari 512 BBs, including the 1977 London Motor Show car, and a Marcos 1800 GT that won the 1981 and 1984 HSCC classic and sportscar championships while being driven by Roger Ealand.

In addition to the auction, some 300 cars will be offered for sale by various classic car dealers at a show that will be opened on Friday by famed Jaguar test driver Norman Dewis.

In addition to Dewis, other motoring celebrities making appearances at the show include John Surtees, John Fitzpatrick and Steve Soper.