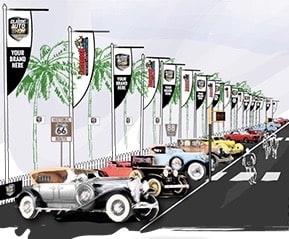 “Bruce Meyer has made it his mission to collect cars with historic race wins and exceptional history and will be featuring some of his iconic private collection during the event,” show organizers said in a news release. “These treasures will be part of The Grand Boulevard, an area of the show showcasing automotive design and technology through the years with an assortment of the finest and rarest classic, muscle, historic and vintage cars the world has to offer.”

The organizers also promise that the show will be “the ultimate car experience featuring an expansive showcase of wall-to-wall classic cars and automotive merchandise including vintage parts, tools and accessories, memorabilia and other nostalgia.

“Attendees will be able to get up close and personal with their favorite celebrities, browse the expansive auto swap and access cars rarely showcased.

“One of the highlights of the show will be the live stage which will include demonstrations, competitions and interviews, allowing attendees the opportunity to meet and hear their favorite classic car celebrities.”

Those celebrities include Wayne Carini, Chip Foose, Dave Kindig, Chris Jacobs and Mike Brewer. Each is involved in a television show on Velocity, a cable network working in partnership with show organizers. autogeek.com is title sponsor for The Classic Auto Show.

“It was important to not only feature amazing cars and the craftsman that maintain, restore and enhance performance, but to also bring together all of the individuals and organizations that participate in enhancing the classic car experience,” Doug Miller, one of the show organizers, said in a news release.

“The Classic Auto Show will bring all of these elements together and allow car enthusiasts to enjoy these machines alongside the celebrities that bring classic cars to our living rooms each week.”

Among the cars scheduled to be at the show are two from the Historic Vehicle Association — the 1964 “Old Red” Meyers Manx dune buggy and President Reagan’s 1962 CJ-6 Jeep.

“These two vehicles, while historically significant on a broader, national scale, have a special connection to California,” HVA president Mark Gessler said in a news release. “Bruce Meyers helped bring California beach culture to the masses with his ingenious dune buggy design and sense of fun and freedom. The jeep represented a different type of freedom as it was the only vehicle President Reagan was able to drive while in office. Used daily at his beloved ranch, Rio del Sol, the Jeep remains largely as it was the last time the late president drove it.”

“We created the event to fill the needs of the market that is the perfect combination of information and celebrity entertainment that the whole family can enjoy,” show organizer Miller noted. “Los Angeles is the ideal location for our launch; the number of classic car fans and collectors is unlike any other region, and we’re excited to deliver this event.”

The Classic Car Show is being organized by Clarion Events and Urban Expositions. Clarion Events is a British company founded in 1947 that stages 200 events a year in 35 countries, including the UK Classic Motor Show, the Classic Car and Restoration Show and Race Retro, as well as the Historic Motorsports show. Its American affiliate, founded in 1995, is Urban Exposition, which is based in Kennesaw, Georgia, and manages 36 events in the United States.