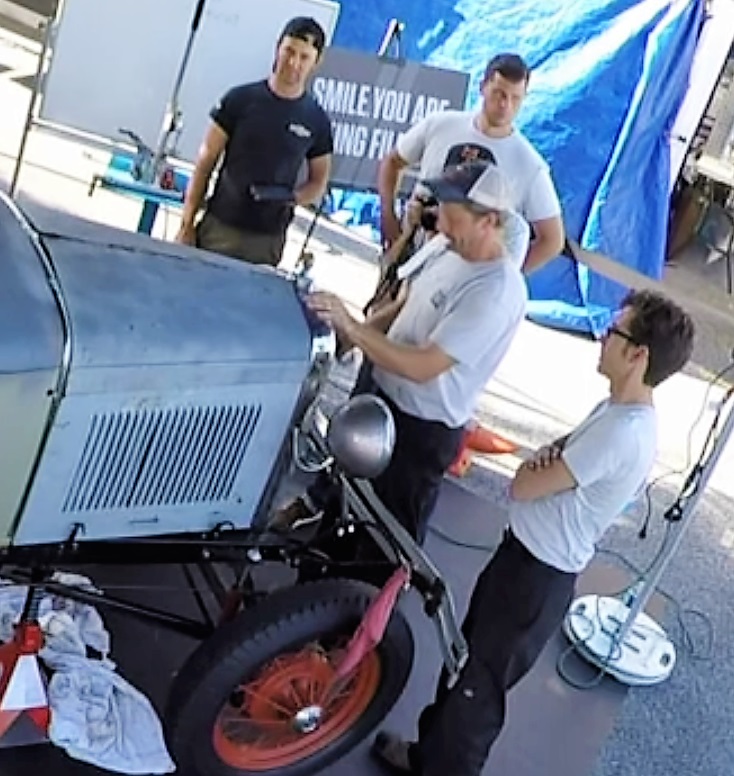 Once again, the Hagerty crew has done the seemingly impossible, created a drivable automobile in just 100 hours and sourced completely from the piles of used parts at the Hershey Swap Meet.

Starting with just the rolling chassis of a 1930 Ford Model A, the four-person team of Hagerty employees set up the Swap to Street Challenge at the start of the Antique Automobile Club of America Eastern Fall Meet in Hershey, Pennsylvania. By the end of the meet four days later, the team departed in the ratty Model A sedan on the 700-mile journey to Hagerty headquarters in Traverse City, Michigan.

This is the second consecutive year that Hagerty, the collector car insurance and valuation company, took on the challenge. Last year, a Hagerty team built a 1946 Ford pickup from parts found at the swap meet, staring out with a decrepit cab and frame, and drove it home.

The idea was to prove – or disprove – the popular notion that you could build an entire car from the sea of parts found at the gigantic old-car festival, which has been held, rain or shine, for the past 61 years. This year, the swap meet took place October 5 through 8.

After completing the parts search and harried build, the team started off for Michigan, trundling along at an average speed of 30 miles per hour. But after two days and 300 miles, and battling a persistent oil leak, dead starter and other minor issues, the team reluctantly called off the drive and loaded the car onto a trailer to be hauled the rest of the way. The reason wasn’t because the car wouldn’t make it, they said, but because it was taking way too long.

“I consider the Swap to Street build a total success, even though we did have to trailer it the rest of the way home,” said team-member Davin Reckow, Hagerty parts supply specialist and project welder.

“The decision wasn’t because of mechanical issues we couldn’t overcome –- it was merely to save time. We all have day jobs and families that we needed to get back to, and at the rate we were going, we would have been on the road for a couple more days.”

The four-day challenge was a scurry of searching for parts along miles of vendor rows at the swap meet. The four skilled team members used either stock parts or else modified whatever they found that could be made to work. The result isn’t pretty, but it does run and drive.

“The second ‘Swap to Street’ build brought new challenges, but we again proved that a functioning vehicle could be assembled within just a few days, solely from parts that we could find at the show,” Reckow said. “You don’t have to be an everyday mechanic or have a lot of money to do something crazy and fun with an old car – you just need the passion, desire and the camaraderie that comes within this hobby. We hope the ‘Swap to Street’ build inspires others to put a project together.”

During the project, swap meet visitors were invited to drop in and observe the shenanigans, and Hagerty live-streamed the proceedings on the company’s YouTube channel.

“Through social media, tens of thousands of viewers were able to interact with the Hagerty team and experience each challenging and successful moment they had along the way,” Hagerty said in a news release.