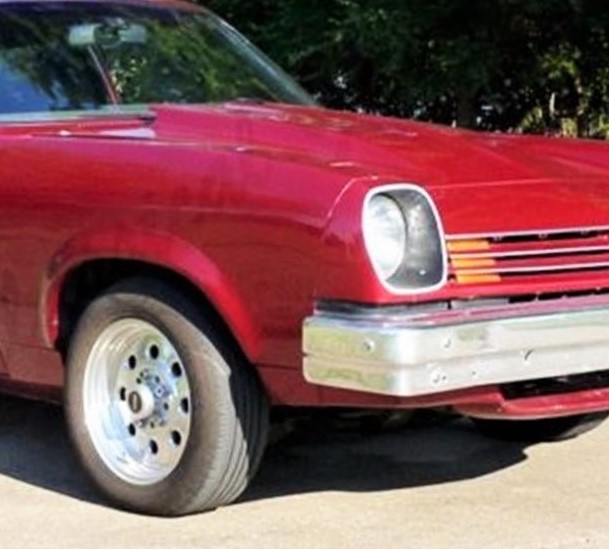 Chevrolet Vega was a sorry low point for General Motors for any number of reasons. Detonating four-cylinder engines, poor build quality, debilitating rust, all the things that seemed to signal in the 1970s that American manufacturers could not build a decent little car. A miserable legacy, best forgotten.

Which is what makes the Pick of the Day, a 1976 Chevrolet Vega station wagon, so fun and interesting. You could call this a contrarian street rod, a Vega with attitude that seems to say, “Yes, I’m a Vega. Deal with it.”

The hot rod look has been accomplished with shaved door handles and trim, a cowl hood and a Metallic Maroon paint job while maintaining the basic stock styling of this attractive two-door wagon (nobody ever said Vegas were ugly). Weld Racing wheels set it off nicely.

The key to this wagon, though, is the 350 cid V8 under the hood, according to the Arlington, Texas, dealer advertising this unique Vega on ClassicCars.com. The installation looks professionally done, as if the car was born with the V8 instead of a problematic aluminum four banger. The custom hood tilts forward for improved access. The engine is topped by an Edelbrock 600cfm carburetor linked with a Turbo 350 automatic and posi rear.

“The car isn’t just looks though because the rebuilt GM 350 motor has been built up nicely and runs strong,” the seller says in the ad. “It has a lot power and has no problem sending this Vega flying down the road.”

The interior also has been upgraded, according to the listing, with aftermarket high-back bucket seats, floor shifter, Autometer Pro Comp gauges in a brushed aluminum bezel, and a Sony Xplod AM/FM/CD sound system with auxiliary inputs.

Sure, there are plenty of Vega hot rods with V8 transplants, but rarely is this treatment done with a wagon. This one appears to be well-finished from what can be seen in the photos, and it would likely be a cool little sleeper for cruising around or taking on a road trip.

This custom wagon is also cheap enough, with an asking price of just $9,950, which would get you a Vega that you could brag about instead of making excuses. And while a hot rod Vega might seem strange, it really does follow the classic formula of taking an unlikely lightweight car and packing it with power.