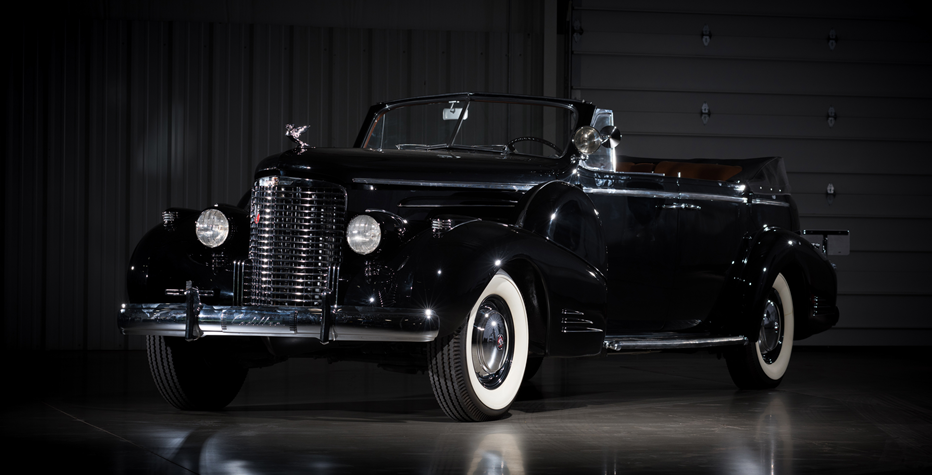 Editor’s note: This is the 29th in a 30-day series featuring cars from the Tammy Allen Collection to be sold October 13-15 at Barrett-Jackson’s 2016 Las Vegas Auction.

In an effort to outshine Packard and its V12 engine, Cadillac recruited Owen Nacker, a former Marmon engineer, to develop the V16. As a result of his efforts, the first Cadillac V16 was introduced in 1930 as the Series 452. The engine produced 185 horsepower and the car was capable of 100 miles per hour when fitted with a light body.

The Series 452 engine featured overhead valves and a 45-degree angle between the cylinder banks, but in 1938 the engine was sized down to 431 cubic inches and reverted to a flathead design, with the cylinder banks angled at 135 degrees, for the Series 90 car.

The body of the Series 90 had been updated for 1938 and was lower, curvier and more modern, and with the engine’s new configuration, it could be mounted further back in the chassis to improve weight distribution and lower the center of gravity.

With the engine reconfiguration, production costs were reduced and prices were correspondingly reduced, which revived sales. Some 315 examples of 12 cataloged body styles were sold in 1938, but that fell to 136 for 1939 and just 61 in 1940, after which the model was dropped.

The car offered from the Tammy Allen collection without reserve at Barrett-Jacksons Las Vegas auction, is one of 13 built and recognized as a model 9029 Convertible Sedan.

This 1938 Cadillac Series 90 V16 convertible and the rest of the Tammy Allen Collection will be crossing the block at no reserve as part of Barrett-Jackson’s ninth annual Las Vegas Auction, October 13-15 at Mandalay Bay Resort & Casino. For more information, visit www.Barrett-Jackson.com/Bid or call 480-421-6694. Absentee bidding options powered by Proxibid are also available.