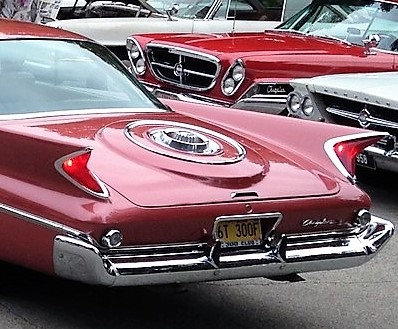 It took 60 years to get back, but there on Elkhart Lake, Wisconsin’s Road America four-mile race track, was a Chrysler 300 Letter Car, just as it had run during the 1956 NASCAR Grand National race under the championship-winning team of privateer Carl Kiekhaefer’s Mercury Marine.

Not only was the 1956 300B at the track but so were a nearly complete set of Chrysler’s famous 1955-1965 “Letter Cars,” widely considered to be one among the first factory-built muscle cars.

The Chrysler 300 International’s Fall Meet on September 21-24, dubbed “Brutes Return to Road America,” brought approximately 35 examples from all over the United States and Canada to the four-day celebration of the full-size performance Chryslers.

Since most of the cars were driven to the event, the first stop was a soapy car wash sponsored by ClassicCars.com and held at the historic Siebkens Resort in the village of Elkhart Lake. Though the club technically includes only the “Letter Car” series from 1955-1965 and the 1970 Chrysler 300 Hurst, a couple of “non-letter” 300s and a sharp 1970 Plymouth Road Runner 440-6 pack attended as well.

Visually, the eccentric Virgil Exner-styled 300 Series cars are radically different from one generation to the next, with the common thread being the potent Chrysler powerplants. The “300” nameplate itself is derived from the motor’s claimed 300 horsepower. Early cars famously utilized the 331, 354 and 392 dual-quad Hemis, which gave way to the wedge-head 413 engines from 1959-onwards.

A 1961 300G convertible gets a rinse at the ClassicCars.Com car wash | William Hall

Renowned-tuner Carl Kiekhaefer of Mercury Marine noted the potential of the “FirePower” Hemi, massaging some of the components and actually returning them to Chrysler to be numbered as “official” OEM parts for his team’s NASCAR campaigns of 1955-56.

Kiekhaefer’s tricks were undoubtedly employed in subsequent factory 300 Letter Cars, which for many years were the most powerful American cars available. The Mercury Marine factory was only 20 minutes away from the host hotel, and the club did a driving tour of some of the race team’s facilities in nearby Fond du Lac, Wisconsin.

Club members enjoyed a full schedule of driving events, from lunch at a local drive-in to a tour of the old public-roads racing circuit of the early 1950s. The legendary hospitality of the Victorian-era resort town won over many new fans, and the members vowed it would not be another half-century before the 300s returned again to Elkhart Lake.