‘Wayne’s World’ Pacer to party down at Barrett-Jackson sale 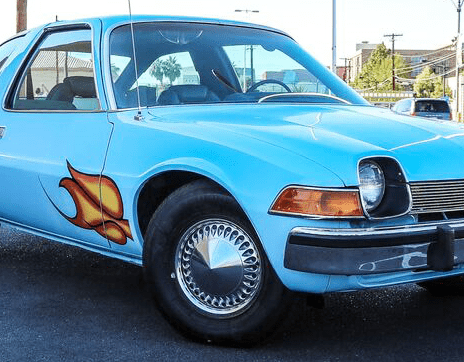 It might seem inconceivable, but the Mirth Mobile – the dowdy 1976 AMC Pacer with pasted-on flames and mismatched wheels driven by the slackers in the 1992 comedy Wayne’s World – has been fully restored as an iconic piece of Hollywood memorabilia.

Not only that, the baby-blue Pacer will cross the block during Barrett-Jackson’s collector car auction in Las Vegas. Purposefully funky and with such custom features as a red-licorice dispenser in the ceiling, the bulbous coupe will be offered at no reserve during the October 13-15 sale at the Mandalay Bay Resort.

The Mirth Mobile joins such movie and TV automotive greats from past Barrett-Jackson auctions as the General Lee from Dukes of Hazard, Herbie from The Love Bug, the haunted Plymouth Fury from Christine and, of course, the original Batmobile from the ’60s TV show.

According to the Barrett-Jackson catalog, this is the actual AMC Pacer from the hit comedy, which introduced us to the weird suburban underground world of Wayne, Garth and their cable-access TV show shot in Wayne’s parents’ basement.

Starring Mike Myers as Wayne and Dana Carvey as Garth, the film also introduced us to the head-banging, sing-along awesomeness of Queen’s ‘Bohemian Rhapsody’; the movie’s opening scene in which Wayne, Garth and their crew warble along with the music playing inside the Pacer is a film classic. It’s hard to look at this car without spontaneously singing out, “I see a little silhouette of a man…”

On the off chance that you might have missed that piece of movie lore, or want to relive it, here’s a link to the clip on YouTube.

The Pacer has been completely restored to how it was in the film, the catalog says (although let’s hope the engine sounds better than when Garth was driving it), complete with the movie prop features and camera supports. No word as to what its estimated value might be, although fans of the cult classic film might consider it priceless.

For more information about the Barrett-Jackson sale in Las Vegas, visit the auction website.