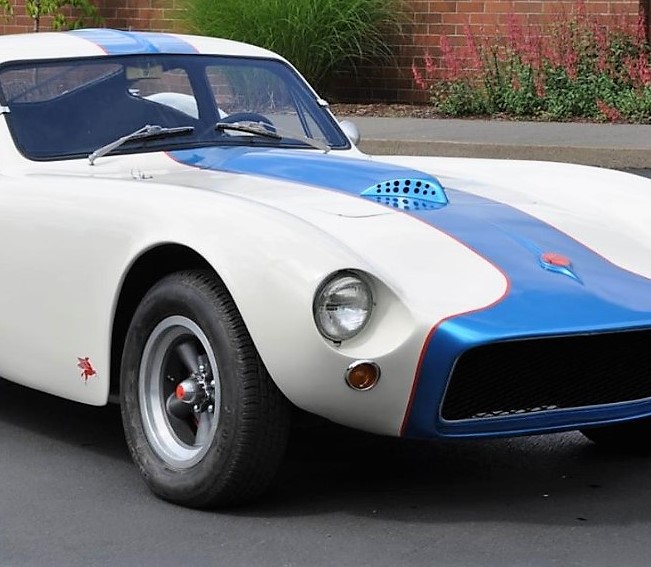 California hot rodders and customizers were set free in the 1950s by the advent of hand-laid fiberglass, allowing them to express their imaginations with unique body designs made in small batches. One of the most successful custom-car builders was Jim Kellison, whose sleek body styles and high-quality products helped set the tone.

The Pick of the Day is his most famous model, a 1962 Kellison J6 Panther, based on a Corvette chassis and powered by a small-block V8. The Panther has been upgraded for modern drivability, according to the private seller in Lake Oswego, Oregon, with a Chevrolet 350 crate engine and Tremec TKO-500 five-speed manual transmission.

“This particular Kellison J6 is a rare survivor,” the seller says in the listing on ClassicCars.com. “During the last 18 months, while the original external look of the car hasn’t been tampered with … we aimed at making this car more safe, reliable, pleasurable to drive and street-friendly.”

Among the upgrades, “We added a new Ididit Tilt Aluminum Brushed Steering Column, a new steering wheel, a new Clutch/Brake pedal assembly and complete Stewart Warner instrumentation set. Of course, a new complete wiring harness was used in the process.”

Safety improvements include laminated glass for the windshield and side windows with a Plexiglas back window, parking brake, turns signals, horn, windshield wipers and power windows, although they require some tinkering, according to the ad.

“Literally hundreds of hours have been spent on the car, most of them ingeniously figuring out how to adapt this modern technology to a 1962 chassis/body,” the seller says.

Other than the turn signals, the body is all original, the listing adds, and the authentic look gets an assist from “its original American Racing Thrust wheels with the Kellison emblem on the wheel center cap.”

Fewer than 100 J6 coupes were produced, and many of them were used up on the race track, as well as making speed runs at the Bonneville Salt Flats, where the cars’ slippery aerodynamics made them a favorite. The styling was wildly advanced for its day, competing with the best-looking sports cars from Europe.

The asking price for the Kellison is a reasonable $54,900 for a rare and exotic piece of California car-craft history, one that should present exciting performance with its lightweight form motivated by a 333-horsepower V8, as well as tremendous head-turning potential.

One cautionary note from the seller: “Driving a Kellison could be ‘challenging’ for 6-foot-and-up tall drivers.”